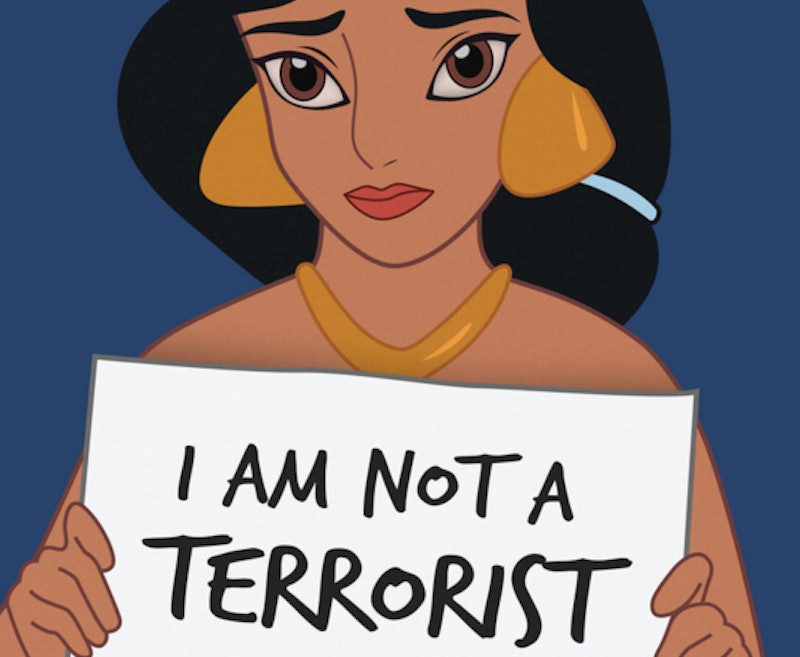 On Friday, the world was rocked when Paris endured its deadliest terrorist assault in history. With the loss of more than 120 lives and 352 injured, it would seem this tragedy couldn't get any worse. Adding to the devastating aftermath, however, is the widespread persecution of Muslims around the globe in reaction to the carnage created by a network of radical Islamists known as ISIS. Now, Middle Eastern artist Saint Hoax is trying to deconstruct the misconceptions surrounding Arabs and Muslims through his "I Am Not a Terrorist" awareness campaign — and he's doing so through two perhaps surprising faces: Disney royalty Aladdin and Jasmine.

Using social media to spread the message, Saint Hoax has begun circulating simple illustrations of the characters from Disney's Aladdin, each holding a sign that reads, "I Am Not a Terrorist." According to the artist, choosing to use these popular personas came about easily and organically. "I immediately settled on Aladdin and Jasmine," Saint Hoax told Bustle via email. "I based the campaign around the fact that these characters visually represent how Islam and Arabs are stereotyped. The idea behind this was to use those stereotypical characters in an anti-stereotyping campaign." Along with the images, Saint Hoax posts a poignant four-line message:

"I am not a terroristHow can I make you see?The terror that terrorized youIs also terrorizing me."

This isn't the first time Saint Hoax has used these characters for this purpose before. Ten weeks ago, in response to the Syrian refugee crisis, he posted a mock Visa with Jasmine's likeness, indicating he had been "DENIED" entry to the place which she was presumably seeking sanctuary.

In using such beloved characters and deconstructing them in this way, Saint Hoax hopes to challenge the way people perceive the Middle Eastern community. They don't exist in the extremes of fairytale characters or terrorists. These are real people, just like any other community of people, and the stereotyping they are constantly subjected to is hurtful and, more so, harmful. Addressing the common misconceptions surrounding Arabs and Muslims, Saint Hoax points out some border on comical. "I'm going to start with the whole camel thing. I mean, yes, of course camels were used as a form of transportation," he said. "But can people STOP using them as a way to refer to 'Arabs'? I have never seen a camel in real life, and I'm Syrian."

Unfortunately, these misconceptions are far too often uncomfortable, accusatory, or worse. "Moving on to more important things like the way Arabs and Muslims are directly associated to violence and terrorism — that is something that affects us on daily basis when we're out of our 'region.' Simple things like speaking in Arabic can make a person sitting next to you on the train change his or her seat. Most of my terrible experiences take place in airports. As soon as I pull out my Syrian passport, everyone goes in full-alert mode," Saint Hoax shared.

And, despite the fact that Saint Hoax is a self-professed huge Disney fan, he admits that Disney is guilty of embodying some of these misconceptions through their characters. "Not just in Aladdin, but in films like Peter Pan (the way they portrayed Native Americans), the crow in Dumbo, and in many other films," he pointed out. "As kids we never pay attention to these things. But a child's memory is like a sponge — they absorb everything they see. Without even noticing they would start building up ideas like Arabs are dangerous and aggressive. I still remember singing 'It's barbaric, but hey, it's home' [from Aladdin] out loud without really knowing what it meant."

Of course, Disney isn't the only one who plays a part in the internalization and, therefore, perpetuation of these stereotypes. Said Saint Hoax, "The media does that on a daily basis by highlighting words like 'Muslim Terrorist' and 'Arab Shooter.' People start to associate these things to each other. You get to a point where you can't say Muslim without immediately thinking of terrorism. So, yes, the media plays a huge part in this."

And right now, the terrifying reality for Muslims around the world is that these culturally ingrained stereotypes will lead to threats, harassment, and even violence from those who fear that which they don't understand. Already, reports are trickling in to this end — the burning of a mosque in Ontario, a voicemail at a Florida mosque promising to "firebomb you and shoot whoever is there in the head." Surges in violence against this community are sadly not surprising in the wake of terrorism. In the weeks following the Charlie Hedbo attack, the National Observatory of Islamophobia documented a 281 percent increase in anti-Muslim incidents.

Compacting the very real fear the community is already experiencing is the fact that the persecution isn't only coming from the people sensationalizing their involvement in terrorist attacks — it is also coming from the terrorists themselves. In the statement ISIS released followed the Paris attacks, they reveled in the slaughter of murdered Muslims. They refer to them as "apostates," a derogatory term implying they have abandoned Islam in favor of Western life and culture.

Sadly, says Saint Hoax, there seems to be little solidarity. "I always like to believe that our generation is more open to diversity, but I always end up being disappointed," he admitted. "When I shared the 'I Am Not A Terrorist' project last night, I received some hostile comments from young people. I find that really sad. Now of course they're probably repeating what their parents said, or what they heard on the news, but it's still upsetting."

So where do we go from here? What will it take to effect the kind of global change necessary for Arabs and Muslims not to be persecuted, stereotyped and, unfortunately, blamed for terrorism attacks outside of their control? Offers Saint Hoax, "I think what we need is a lot of awareness. We also need to construct better news headlines. Some people never go past reading headlines — it's crucial to put in the right words. When a white person commits a crime, he or she is always singled out. On the other hand, when an Arab commits a crime, the entire race takes the blame in the headline."