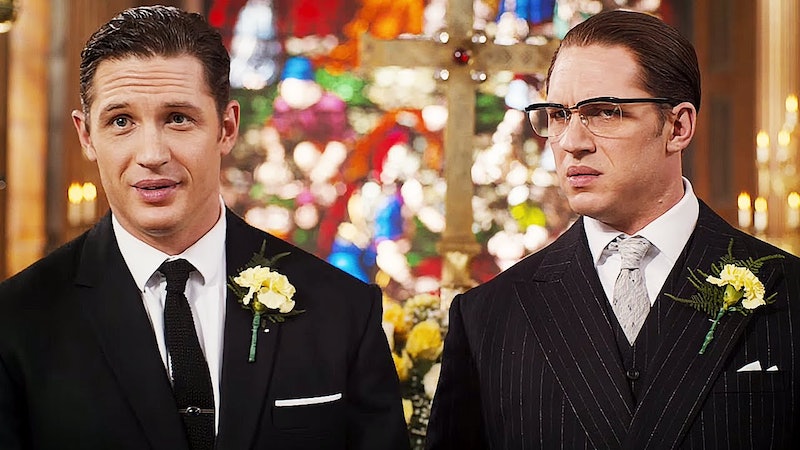 The movie Legend tells the story of Tom Cruise trying to defend the world's last unicorn from Tim Curry's Lord of Darkness and... oh wait, wrong Legend. The new movie called Legend stars Tom Hardy as notorious criminal twins Reginald and Ronald Kray. The Kray twins were at the forefront of organized crime in London in the mid-20th century, and even achieved celebrity status thanks to their exploits and powerful connections. Hardy is pulling double duty by portraying both twins in the movie, but the important question for many people is how accurate is Legend ?

According to some early reviews, not that accurate. But to be fair, as fans saw with Black Mass earlier this year, any movie about a real-life criminal is going to face more scrutiny than your average film, as the subject matter raises the debate of whether the movie is glorifying a vicious person's life versus showing the human side of a monster. It's a difficult line to walk. And then there's the issue of plain old historical accuracy; a lot of the criticism Black Mass faced had to do with the liberties it took with aspects of Whitey Bulger's life that weren't really known because he was such a private person. But the Kray twins were well-known public figures, so Legend's case is a bit different.

In the film, there are specific events depicted that are reportedly different from the way they really transpired. For instance, the movie portrays Ronald's escape from a mental hospital by simply having Reginald threaten the staff into certifying his brother as sane. But in reality, according to The Guardian, the Kray twins had an elaborate plan where they dressed alike and fooled the staff into thinking both were Reginald at different times, allowing Ronald to leave. Another incident where the film seems to twist the truth involves one of the twin's most famous murders, that of Jack "The Hat" McVitie. The movie depicts the brothers as being at odds, with Reginald stabbing McVitie in a rage and telling Ronald that he wished it had been him. In real life, both brothers killed McVitie together. And finally, an incident that seems to be invented purely for the movie involves Reginald physically attacking his wife Frances. There is no known account of any domestic violence between them having ever occurred.

The brothers' sexuality is also an object of contention. The movie shows Ronald as homosexual and Reginald as heterosexual, but the reality is likely more blurred as both brothers were actually said to be bisexual. Ronald had reportedly planned to marry a woman before being jailed (and later married two women), and a major incident where Reggie allegedly tried to rape his wife's brother is not featured in the film at all. But perhaps the biggest difference is the depiction of Reginald as the sane brother trying to rein in his psychotic brother Ronald, causing a rift between the twins. In reality, both brothers were convicted murderers and lifetime killers, and are not believed to have been at serious odds with each other at any time.

Although Legend takes some liberties with the truth of the Kray twins, that's not to dilute the quality of the film; it's not uncommon, of course, for a "based on a true story" film to veer from its source material, and still be an entirely worthwhile movie. Historical issues aside, Tom Hardy's performance is fantastic, and the movie itself is certainly worth seeing. At the end of the day, no film that's not a documentary has a responsibility to tell the full, specific truth — its purpose is first and foremost to entertain. And in that respect, Legend does just fine.