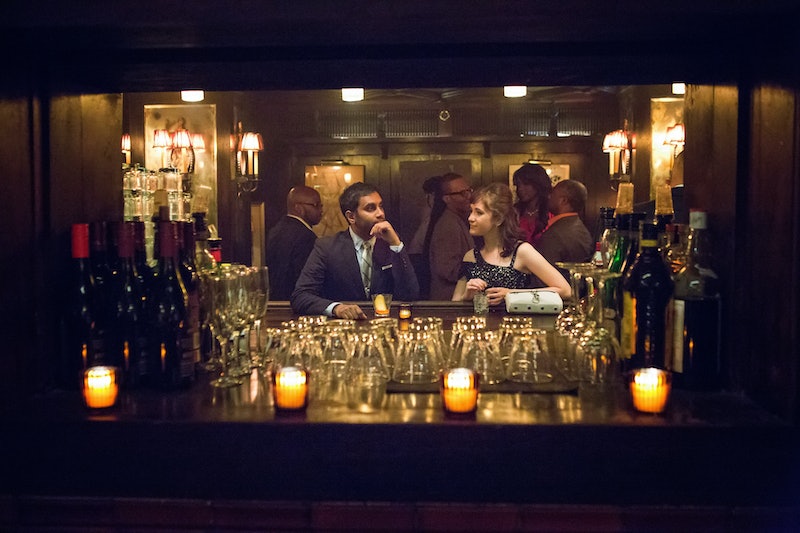 Master of None exploded onto the cultural landscape when it debuted earlier this month, and fans are already asking for another season of the critically acclaimed comedy. Netflix has not renewed Master of None for Season 2 yet, but Aziz Ansari recently said in a reddit AMA about himself and co-showrunner Alan Yang, "We haven't heard officially from Netflix. But Alan and I, like true Asians, have started an insane chain of ideas already." They haven't talked more than that about what exactly those ideas are, but there's still a lot of unchartered territory about modern living that Master of None has yet to tackle. I already have some topics in mind that I would love to see Master of None tackle in Season 2. Update: On Feb. 11, Aziz Ansari confirmed that Master of None will return for Season 2 in 2017.

Ansari literally (co-)wrote the book on Modern Romance , and there are plenty of aspects to dating in the 21st century that Master of None didn't cover in its first season, as well as some common elements of modern city living that the comedian addresses in his stand-up, but hasn't yet mentioned on the show. Ansari and Yang already have all of the material they need, they just have to figure out how it fits into Dev and his friends' ongoing adventures into adulthood. Here are some of the stories I would like to see Master of None tell, should Ansari and Yang get a second season and put that "insane chain" to good use.

In the age of "Netflix and Chill," it's hard to tell whether meeting up with someone is supposed to be treated seriously or as something casual. In Modern Romance , Ansari says "The lack of clarity over whether the meet-up is even an actual date frustrates both sexes to no end." This confusion and misunderstanding is rife with opportunities for comedy.

According to Modern Romance, “more than 80 percent of millennials admitted to doing online research on their partner before a first date.” This approach had differing results for different people, as Ansari said, "Some singles we spoke with described meeting a person and being unable to enjoy the date because they already had all kinds of preconceived notions that were difficult to block out." It's likely that the same Dev who has to spend 45 minutes googling "best tacos in NYC" would psyche himself out of a date by researching the other person before they meet.

In his book, Ansari says, “online dating is almost a prerequisite for a modern single. As of this writing, 38 percent of Americans who describe themselves as 'single and looking' have used an online dating site.” However, the show hasn't yet addressed online dating, as it seems everyone on Master of None meets their partner the old-fashioned way (at a bar).

Ansari, in his stand-up, tells a few brief anecdotes about going out on the town to meet women and it turning into just a guy's night out. Dev's male friendships (aside from best-bud Arnold) seem to live in a separate world from his search for companionship, and it would be interesting to see how these worlds would collide on Master of None.

In his Live From Madison Square Garden stand-up special, Ansari juxtaposes an awkward encounter between two close friends who hook-up by telling it as if it were a traditional "how we met" story. Many sitcoms have explored the awkward territory of friends who sleep together, but Master of None is capable of delving into the subject matter with a lot more subtlety and nuance than other series.

Ansari also calls Millennials "the flakiest generation" in his Live From Madison Square Garden special. It's likely that Dev, or an associate, will end up getting stood up by a date or a friend at one point or another. Master of None's unique structure could get a lot of mileage from this fairly standard concept of dating.

FOMO, or "Fear Of Missing Out," plagues us all. In his stand-up, Ansari talks about how people "don't want to commit to anything, in case something better comes along," lest you end up apple picking in upstate New York with Dave while your friends attend a surprise concert by your favorite musicians who you thought were dead. Broad City recently did an episode covering FOMO, but I'm sure Ansari and company also have their own humorous take on it.

Earlier this year, Ansari and Yang lost one of their Master of None writers and closest friends, comedian Harris Wittels. Ansari was especially affected, writing a long tribute to Wittels on his Tumblr a few days after his death. While this specific situation is obviously a very personal matter to Ansari, using some of that experience to write about an unexpected loss could make for a really poignant episode.

In his stand-up, Ansari talks about how people "don't allow themselves" the privilege of "out of sight, out of mind." Instead, a jaded person will take to social media to try and discover everything that their ex is doing. It's a destructive habit that "45 minutes of taco research" Dev could easily get himself into.

Much of Ansari's comedy focuses on modern dating and how love causes other people to interact, but those aren't the only subjects he's discussed in thoughtful, funny ways. Master of None explored relationships between parents, racism in the entertainment industry, everyday sexism, the trials and tribulations of growing old, and more. Ansari and Yang should have no problem tackling more important aspects of modern living with their trademark humor and humanity, and they already have plenty to draw from. Hopefully, a Master of None Season 2 renewal will come sooner rather than later so they can get to work.