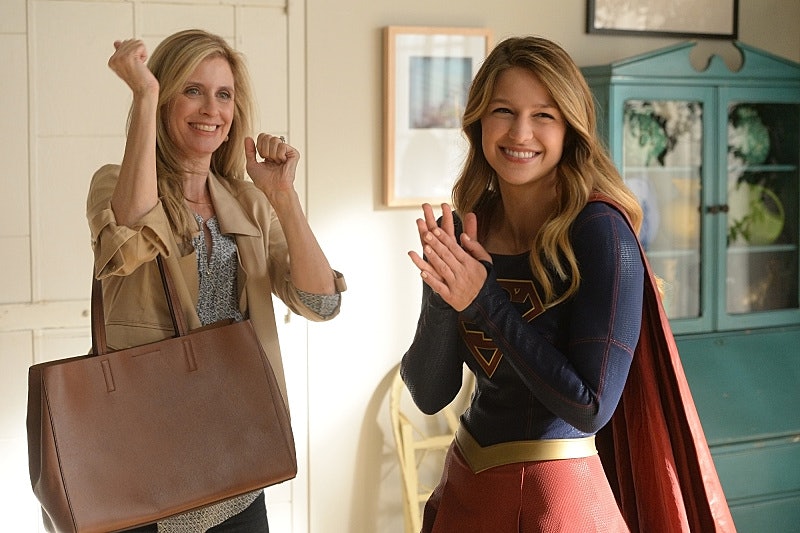 While Kara Zor-El has found a work family in James Olsen and Winn Schott, repaired bonds with her sister Alex Danverrs, and caught up with her villainous blood relative General Astra, the Supergirl family is ever growing. Monday's episode marks the return of Helen Slater as Eliza Danvers on Supergirl. Who is this actress and why is she significant? The lady who took in young Kara upon her arrival from the planet Krypton has a long legacy with the comic book character.

According to the official CBS press release for the episode "Livewire," which is airing on CBS this Monday night, "Kara's Thanksgiving may be ruined when she suspects her foster mother, Dr. Danvers, who is coming to town, disapproves of her new role as a superhero." The episode is airing out of the original order in light of the Paris attacks.

Fans of DC Comics and entertainment will almost certainly recognize Helen Slater as the woman who first brought Kara Zor-El to life in the 1984 movie Supergirl. She starred in the film alongside such heavy hitters as Faye Dunaway, Mia Farrow, and Peter O'Toole. So, be on the lookout for some throwback Supergirl Easter Eggs as you watch the episode. Another actress who famously portrayed the character on Smallville is Laura Vandervoot, who you may recognize from V, Instant Star, and Bitten. Wouldn't it be cool to have all three Supergirls in a scene together? I digress. Slater also appeared on Smallville as Clark/Kal's birth mother, the Kyptonian Lara-El. It's a fun choice to have the actress make a cameo from the Earth side of things in this adaptation.

You may also recognize Slater from movies such as Lassie, Ruthless People or City Slickers, or guest appearances on television shows that include the series finale of Mad Men, (she played the lady at the hippie retreat who finally got Don Draper to hug it out), Gigantic, and an arc on The Young And The Restless. However, the fact that she is passing on the Supergirl torch to CBS star Melissa Benoist is the most important thing to remember. It reminds us that these characters have been around for a long time, and will continue to be enjoyed and loved for generations.