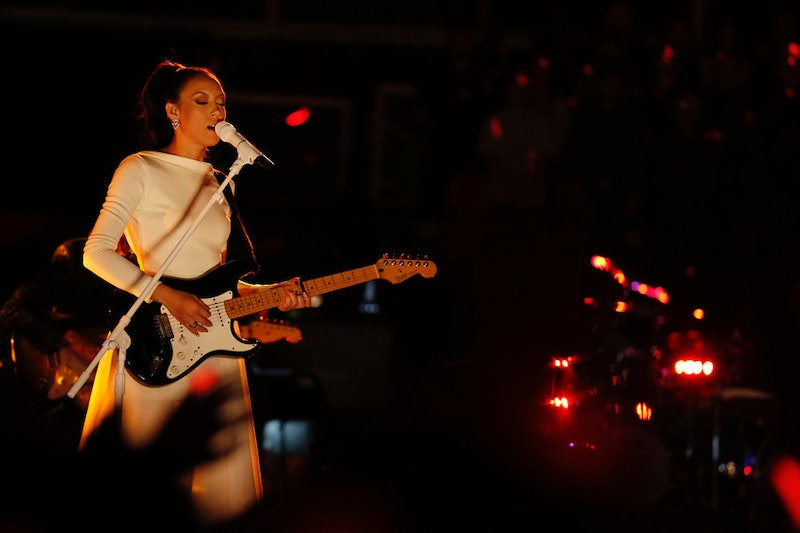 You've got to love when The Voice contestants cover songs that should just never, ever be touched. Adele and Beyonce have already been covered, so I pretty much thought that we'd be done with crazy song choices for the rest of the season. But I was wrong. Team Adam contestant Amy Vachal covered Drake's "Hotline Bling" in the first Live Shows of the season — and it was a surprisingly great performance.

I'll be the first to admit that I've never listened to "Hotline Bling" in it's entirety (a tragedy, I know), but I know enough to know that it's not a typical choice for Vachal, or even for this show. If the execution wasn't done right, the performance could've gone horribly wrong for Vachal. But it didn't. The arrangement was perfect and Vachal absolutely slayed it. If it weren't for the lyrics, I would've thought she was singing a sultry love song from the Jazz age. Her performance was sexy, smooth and all-around pretty fabulous.

Because Vachal's rendition was such a departure from the original, it was certainly controversial. While I was a huge fan of her performance, there were plenty of haters voicing their opinions on Twitter. Many Drake fans were upset with the song choice, wondering why she was touching it at all. But with all the haters came plenty more fans who supported the unique, acoustic version of the song.

The controversy certainly makes it difficult to determine whether or not the Team Adam contestant will earn enough votes to remain on the show. Either way, Vachal definitely made a statement tonight and proved that she's a one-of-a-kind talent. She was able to successfully transform one of the hottest songs on the charts right now into another work that the audience truly appreciated — that's the sign of a true artist.