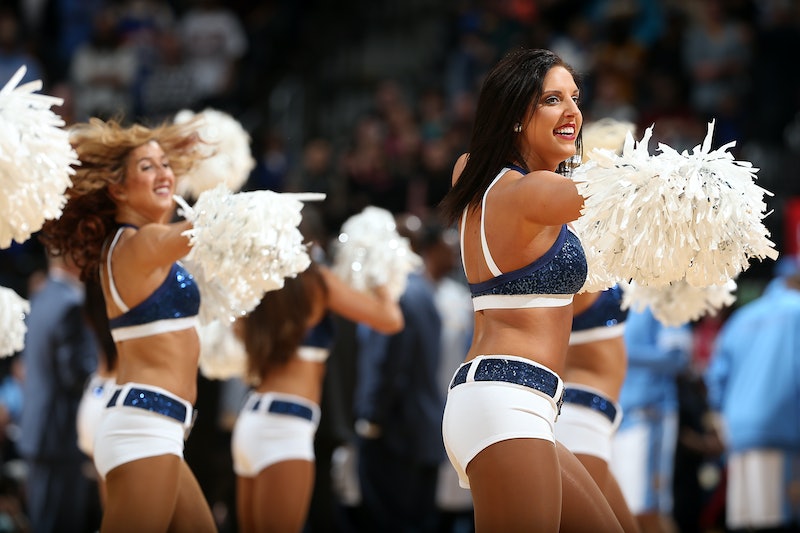 What's more American than watching a football game or attending your high school prom? Not much. But, as it turns out, some of the most cherished traditions in American life are steeped in a history of sexism. From first date rituals to football games, some of our most beloved American traditions are based in sexist practices from history.

Many of these traditions were passed down from European cultures, rooted in centuries of old-fashioned thinking, but the U.S. has done little to reverse sexist traditions like the ones below. In fact, generally capitalism seems to have reinforced gender roles and stereotyping to this day. We see this still in advertising, where women are too frequently pigeonholed into objects of the male gaze. And while feminism has made great strides in so many aspects of American life — opening job opportunities long-denied to women, asserting a woman's control of her own body, and encouraging young girls to value their intelligence and grit rather than looks — some habits die hard in the U.S.A.

What's most frightening is how deeply embedded these sexist customs have become in modern Americans, millennials included. It's time we question them — yes, even Valentine's Day and the senior prom.

From the sexualized outfits to the minimum-wage pay and "jiggle tests" denounced by modern cheerleaders, the sport has always been associated with an array of sexist controversies. Surprisingly, cheerleaders weren't always women. By the early 1900s, football was the most popular sport on American college campuses — but it was men who did the cheering back then. Women weren't even allowed to participate until 1923. Male-dominated cheerleading teams continued until WWII. In the absence of men during the war, women took over, and a tradition was born.

The sport grew in popularity through the '50s and '60s. In 1977, the Dallas Cowboy cheerleaders appeared on the cover of Esquire. "Because of the strong Christian ethic that infuses the Cowboys program ... the cheerleaders cannot appear where alcohol is served, cannot attend parties of any sort, cannot even wear jewelry with their brief costumes," wrote The New York Times the following year. Other teams followed the Cowboys' example, and began outfitting their cheerleaders in crop-tops and short shorts.

Now, some feminists are questioning whether cheerleaders are an essential part of the football experience. "They might be intelligent, grounded amazing women, but we're solely left to judge them by the outside packaging, which is getting skimpier and skimpier as cheerleading evolves in the United States," Joanne Gerstner, a sports journalist in residence at Michigan State University and former president of the Association for Women in Sports Media, told CNN. "If cheerleaders are necessary, why are there no cheerleaders for any women's sports?"

Tons of sexist traditions are embedded in the American wedding. First, there's the still prevalent expectation that it is the man's job to propose. You can namedrop Lorelai Gilmore all you want, but according to the Huffington Post, only 5 percent of women proposed to men in recent years, and the numbers haven't changed much in the past ten years. Even more surprising: young people are less open to the idea of women proposing than older Americans. One third of those under 30 think it's unacceptable.

Then there's the tradition of a father "giving away" his daughter by walking her down the aisle. Historians date this back to Europe pre-1800, when women were considered the property of a man, usually either her father or husband. If you think this is a universal tradition, you're wrong. Some countries, like Sweden, have turned away the practice of "giving away" the bride. Instead, the bride and groom walk down the aisle hand-in-hand to symbolize their equality. Aww.

Paying For The First Date

There's something suspiciously 1950s about the first date culture in today's United States. Based on surveys, CNN reports that even in 2015, 75 percent of men feel uncomfortable accepting money from a woman on the first few dates. Feminists question the practice of always expecting men to pay, but even as more women became financially independent, the politics of the first date remained.

Men used to "call on" women in the 19th century at home, where dates were always chaperoned. Not much changed after WWII, when boys would pick up their sweethearts in their cars, pay for food and activities, and maybe one day "go steady" by branding their girl with a class ring or letterman jacket. Sure, the Sexual Revolution made things a bit more equal. But when it comes to money, it's clearly still the man's game on the first few dates.

It's a big business season for jewelry, chocolate, and lingerie companies, so advertisers like to use Valentine's Day to reassert sexist notions about women: that they're superficial or need to look beautiful and sexy to be loved.

But the gender role standard imposed on Feb. 14 has been in practice for centuries. Since the earliest known valentine in 1415 by the Duke of Orleans to his wife while he was imprisoned in the Tower of London, men have been sending cards to women for Valentine's as a courtship ritual. Mass-produced Valentine's cards were invented in the U.S. (surprise, surprise) in the 1840s and became a booming industry, securing the tradition for Americans ever since.

Cotillions, debutante balls, and even the ubiquitous senior prom stem from a centuries-old tradition that is a classic part of Americana all over the country. Beginning in the 1600s, young women old enough to be married were presented at a public gathering, often a ball. Girls were outfitted in dresses and jewelry to appear physically attractive to potential suitors. The tradition gained popularity through the centuries. In the '50s, American high school proms were common and took on many of the traditional gendered qualities of dating culture (see above).

Feminists of the 1960s condemned these sexist rituals, and many schools canceled their proms in the late 1960s and early 1970s. Yet prom remains a mainstay in the 21st century for young men and women all over the U.S. And, like the rest of these traditions, it's not going away any time soon.