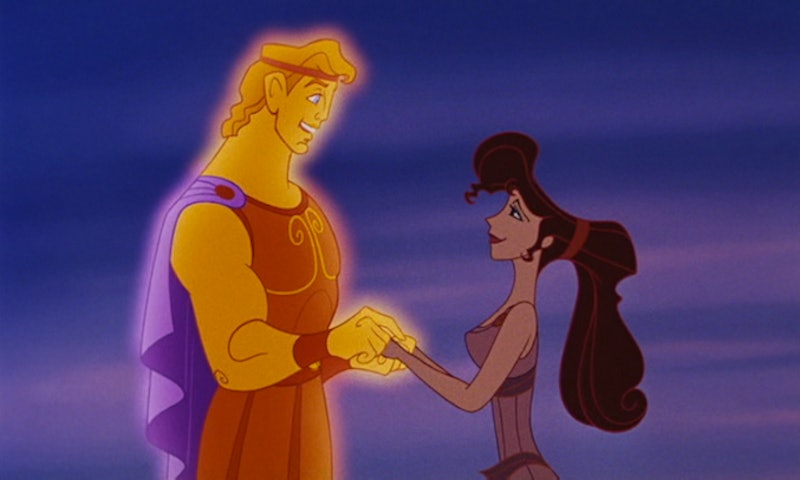 After a few weeks of speculation, Once Upon A Time has cast Hercules and Megara. Newcomer Jonathan Whitesell and Kacey Rohl of Hannibal will be portraying the dynamic duo starting in the 13th episode of the fifth season, which is titled "Labor of Love." And all I can say is that I've waited out way too long for these heroes. I don't know about you, but I actually remember seeing Hercules when it came out in theaters, and it’s been in my Disney top five ever since. There might be a gentle bias because I’m half Greek, and I grew up thinking Hercules was a true story of my people (spoiler alert: no).

Even beyond that, though, it never made sense that Hercules, with all his might and his mythological baggage, had yet to make an appearance in OUAT. It made even less sense that Meg — endearingly human, yet a goddess of wit — hadn’t shown up. Or gotten her own spinoff yet. Once Upon A Time In Nessus’ Gross Centaur Hand is the working title.

Anyhoo, while I’m glad this is finally being resolved, here is 11 reasons Meg and Herc should’ve been on the show sooner.

Once Upon A Time is fixated on magic and supernatural weirdness, which is why Elsa was such a breath of fresh (icy, cold, slightly pandering) air, what with her ice-specific powers. Hercules is only a demigod because of that pesky mortality thing, but that super strength is a big, big plus. He's definitely someone you want on your side.

She's charming, flirtatious, self-deprecating, filled with cynicism and doubt ... Meg was president of the tough girls' club was before Emma was even a red-coated concept.

Even when soaking wet, Meg has the kind of award-winning auburn hair that makes Rapunzel look like trash. Oh, and Herc has all those "rippling pectorals." Also a plus.

4. They're A Top-Tier Cute Disney Couple

Consider the following: OUAT has been able to retell the tale of Snow White and Prince Charming into an epic love story, while in the original fairy tale, it was like ... boy meets girl and her birds, boy later kisses girl when she's allegedly dead. Think of what the show could do with Meg and Hercules, the sensitive strongman and the beautiful snarker. Potential! So much potential! So much cuteness!

5. They're Just So Damn Cultured

While everyone in Storybrooke was murdering each other and having weird psuedo-incestuous relationships (big kingdom, small town), Herc and Meg were brushing up on the classic ... plays about murder and incest. Oh, Oedipus.

OUAT's main thing is fairy tales, but it's experimented with other sources. There was that detour to Oz, the spinoff with Wonderland ... even Camelot has had a part. So there are endless possibilities with Hercules and Megara joining the team, since that potentially opens up the a world of Greek mythology (something the show has dabbled in, though not as a full-blown realm). And we all know what other crazy characters reside there ...

7. The Potential Addition Of Hades As A Villain

Dude, who doesn't love Hades? Who wouldn't want to see the sassy Lord of the Underworld in all his blue-flamed glory? I just don't understand how we brought Cruella De Vil into Storybrooke before the god of death. Then again, wishing death in a puppy-specific way is more heavily weighted than being a death generalist, I guess.

8. Even The Possibility Of A Danny DeVito Cameo

If Phil shows up, then I don't want anyone else playing him.

Pegasus feathers can make a ship fly. And, you know, flying ships are cool and all, but I want to see the real thing.

10. Hercules Was One Of The Most Delightful Films Of The '90s, And It's Not Celebrated Nearly Enough

It's such a quality pick, and still holds up today — which, truthfully, you can't say about all the Disney classics.

Herc has gone up against hundreds of hydra heads, while Meg literally died to save his clueless ass. They're a formidable team, and Once Upon A Time could definitely use that in a town gone dark. I can't wait.