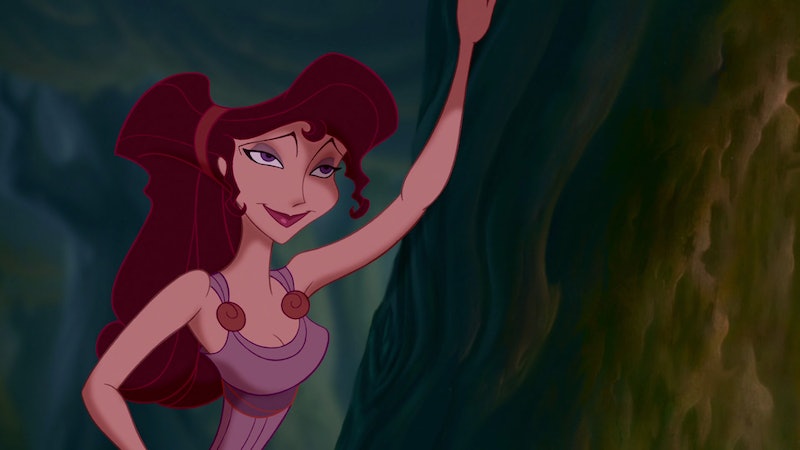 Throughout its long lineage, Disney has provided us with a plethora of beloved princesses and heroines. Although it's fun to choose Ariel from The Little Mermaid or Belle from Beauty And The Beast as your favorite, why not choose a delightful firecracker like Meg from Hercules ? Remember her? In case you forgot, Meg's character was a big departure from some of the heroines we had been privy to. Unlike the ingenues before her, Meg only used her feminine wiles as a guise to pay her dues to evil Hades, who it was revealed she was forced to work for after selling her soul to save a boyfriend's life. Being that said boyfriend later thanked Meg for her sacrifice by leaving her for another woman (what a jerk!), the jilted heroine was decidedly cynical when it came to the concept of love. This cynicism is part of what upended the stereotype in the landscape of many fairytales, which show women who are unremitting in their search for love and "happily ever after." Meg offered a realistic portrayal of a woman who had become guarded after having her heart broken.

She wasn't merely defined by her heartbreak, however — quite the contrary! The film successfully honed in on all the complexities of the tritagonist's personality. She possessed a biting wit that could sometimes be acerbic, and her independence was the antithesis of a damsel in distress as she dispensed quips like, "I'm a big, tough girl. I can tie my own sandals and everything."

The aforementioned are only a few examples of how Meg was the most underrated Disney heroin ever in a movie that was also decidedly underrated. Let's delve further into this topic and explore the reasons Meg needs to become everyone's favorite Disney heroine ASAP.

She's Arguably The Sassiest Heroine There Is

You gotta love that sass.

"I Won't Say I'm In Love" Is Everything Ever

Not only is "I Won't Say I'm In Love" one of Disney's most addictive pieces of ear-candy, it veers from the typical love-laced ballads we're used to. Joined by The Muses, Meg attempts to vehemently deny her amour for Hercules until the last dreamy lyric. Love. It.

Meg's strength and assertiveness is something we can all be inspired by.

Perfection is so boring — amiright?? Meg's missteps make her all the more relatable.

She Has The Best One-Liners

IMHO, there is nary a Disney heroine who can match Meg's wit.

She Teaches Us To Be OK With Vulnerability

For much of Hercules, Meg operates in opposition to vulnerability. We see the pay-off when she finally allows herself to be sensitive and open to love, which is one of the best take-home messages of the film.

She Also Teaches Us To Believe In Second Chances

Most of us (hopefully, all of us) haven't ended up in a quandary where we had to sell our souls to a Disney villain in order to save the life of a philandering lover. That being said, heartbreak is difficult no matter what the circumstances. As jaded as Meg feels for much of Hercules, she eventually learns that her past heartbreak was necessary for her to meet the real love of her life. Aww!