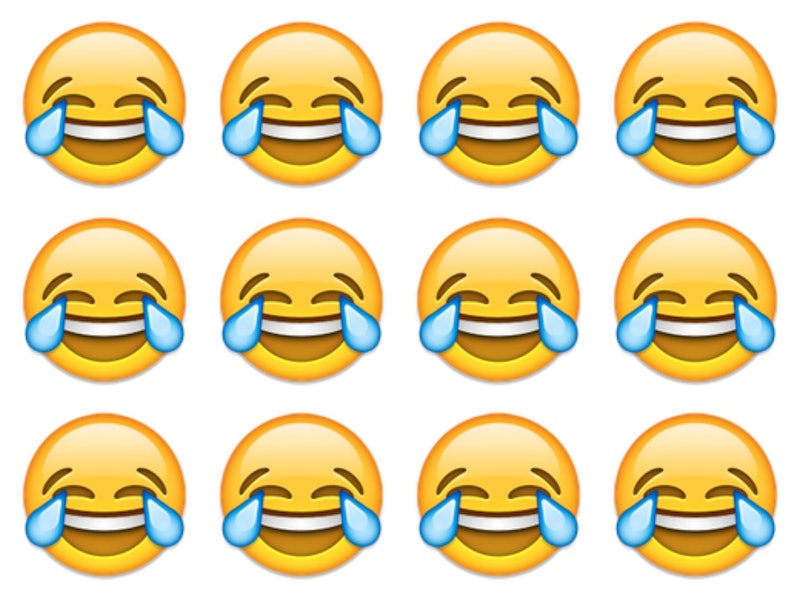 So, hey, in case you haven't already heard, the Oxford Dictionaries 2015 Word of the Year has been announced — and it's… possibly not actually a word. The “Face With Tears of Joy” emoji is 2015's Word of the Year, which some might find a little confusing. According to the Oxford Dictionaries website, the emoji was chosen as “the 'word' that best reflected the ethos, mood, and preoccupations of 2015.” I can only assume this means 2015 has been the yearly equivalent of an “I laughed, I cried” kind of movie.

But there's a little more to it than just that, of course. Oxford University Press recently partnered with SwiftKey to do a little data analysis on the most popular emoji in the world — and it turns out that the Face With Tears of Joy emoji was the most used emoji globally in 2015. According to SwiftKey's stats, this particular emoji made up 20 percent of all emoji used in the UK and 17 percent of those used in the United States this year; in 2014, it only accounted for four and nine percent respectively. That's an impressive jump — and all the more so when you consider the fact that it happened over just one year.

Is it a little weird that the Word of the Year isn't actually a word? Maybe — but given that emoji have more or less become a language of their own complete with grammatical rules, I feel OK about considering each individual pictograph to be a "word," so to speak. And hey, at least it's better than last year's pick, right?

Speaking of, let's take the opportunity to look back at a decade's worth of previous Words of the Year. It's worth noting that the Word of the Year isn't always the same in both the United States and the UK; I've focused on the American ones here (because, well, 'Murrica is where I happen to be right now), but if you're curious about the British ones, you can find them all on the Oxford Dictionaries Word of the Year FAQ page.

Definition: "Inhale and exhale the vapor produced by an electronic cigarette or similar device."

Honestly, I'm still having a hard time believing that “vape” was actually the 2014 Word of the Year.

Definition: “A photograph that one has taken of oneself, typically one taken with a smartphone or webcam and shared via social media.”

Of course “selfie” made its way into the hallowed halls of the Word of the Year. According to the Oxford English Dictionaries, “selfie” rose in popularity exponentially during the course of 2013; however, its earliest known usage actually dates back to 2002.

Definition: “To create a GIF file of (an image or video sequence, especially relating to an event).”

That's right — in this case, we're talking about GIF as a verb, not as a noun. I've actually never heard anyone use GIF as a verb, so maybe this particular usage has fallen out of favor in the three years since it won the coveted award. Interestingly, there was also a separate UK Word of the Year in 2012; it was “omnishambles.”

Definition: “That section of society deemed to be most affected by inflation and tax rises because they are in jobs that deliver low to middle incomes which have not been rising as fast as their expenses (or, in some cases, not rising at all).”

Weirdly, there is not actually a definition for the phrase “squeezed middle” in the Oxford Dictionaries database; this definition is from the Financial Times Lexicon. I'm therefore unclear exactly how it came to be the Word of the Year, but maybe some things are better left unanswered.

Although Sarah Palin brought the word (which may not actually be a word, by the way) to the fore in 2010, she actually wasn't the first person to use it: According to Mark Liberman at Language Log, a Google Books search turns up for instances of it, with the most notable one appearing in the 1984 short story “Answers” by John Sladek.

Definition: “To remove someone as a 'friend' on a social networking site such as Facebook.”

An unsurprising yet necessary pick — and one that has since become a standard fixture in our cultural lexicon.

Hypermiling is also not a word I've ever actually heard someone use, but then again, that might have something to do with the fact that I've spent most of my adult life living in major metro areas — that is, places where people don't often own cars (hi there, public transportation!). According to the Oxford University Press, the word was coined by Wayne Gerdes of CleanMPG.com in 2004.

Definition: “A person whose diet consists only or principally of locally grown or produced food.”

Locavore first came into being in 2005; some who follow the same principal call themselves “localvores” instead of “locavores,” but either way, I've yet to meet anyone who unironically refers to themselves as this kind of eater.

Definition: “Making no net release of carbon dioxide to the atmosphere, especially through offsetting emissions by planting trees.”

Interestingly, the 2007 Word of the Year for the UK was “carbon footprint.” We seem to have had the environment on the brain a little more back then than we do now.

Definition: “A digital audio file made available on the Internet for downloading to a computer or portable media player, typically available as a series, new installments of which can be received by subscribers automatically.”

Like “unfriend,” I would argue that “podcast” has only become more prominent in the years since it won the Word of the Year award. Weird to think it's been a full decade since then, isn't it?