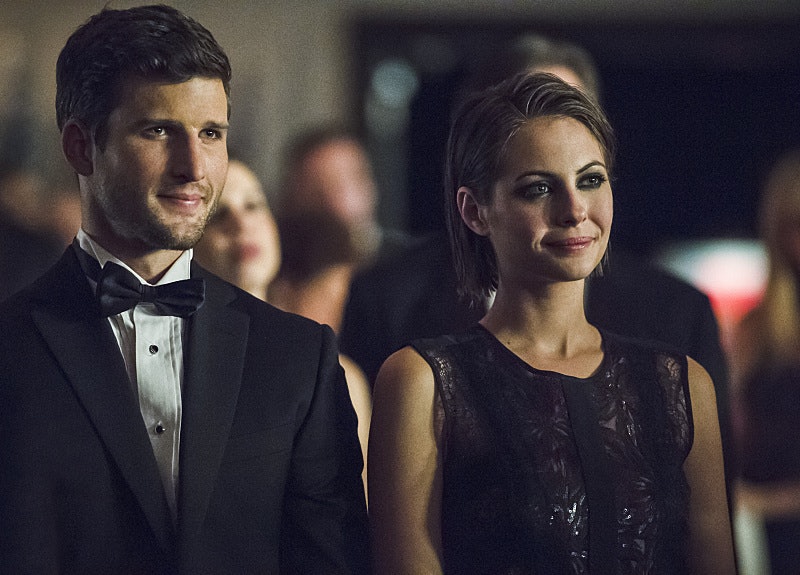 After experiencing a relatively dark storyline this year, things are finally about to start looking up for Thea in Arrow Season 4. Now that her bloodlust from the Lazarus Pit appears to be under control (at least for the time being), Thea will be getting a love interest in the form of Alex Davis, played by former Enlisted star Parker Young. We've seen Alex pop up a few times already throughout the season as Oliver's political strategist in his mayoral campaign and there's no denying that he shares some pretty great chemistry with Oliver's not-so-little sister. But while it's just been innocent flirting up until this point, this week's Arrow episode "Brotherhood" will find these two potential lovebirds attempting to take their relationship to the next level. Unfortunately, though, it might not go as well as either of them would hope.

According to the episode synopsis, "Thea's bloodlust returns and she loses control in front of Alex," which is bound to lead to some grim complications, considering he could accidentally become her next killing target. (But hey, first dates are always a little rough anyways, right?) Suffice to say, this could end up setting their possible romance back a few paces, especially since Alex isn't privy to all of the information and may just think that Thea's violence is a character trait rather than a mystical side effect.

That being said, I wouldn't give up on this couple just yet. In fact, this character was brought on for the sheer purpose of being Thea's love interest. Now that Roy doesn't appear to be coming back in the foreseeable future (*sobs uncontrollably*) it'd be nice to see Speedy get some companionship again. In light of everything Thea's been going through lately, she could use a shoulder to cry on, even if that particular shoulder can't know too many intimate details about her life (such as her vigilante escapades).

So the way I see it, this could all play out with three possible endings: 1.) Alex will end up dying by Thea's hand and lead her down an even darker path; 2.) Alex will serve as a temporary fling that will help her overcome her bloodlust; or 3.) Their connection will become so strong that Young will get bumped to a series regular and become a core member of the Arrow family. Either way, you have to admit that he's pretty easy on the eyes and has the potential to become a much beloved character. That is, if he really is as nice as he seems. (Let's not forget that Thea's last boyfriend was a secret member of the League of Assassins.) But, I mean, what are the odds of that happening twice?

No one can ever replace Roy, but Thea could use some happiness right now, and if this guy is able to provide that for her, then who am I to stand in the way?