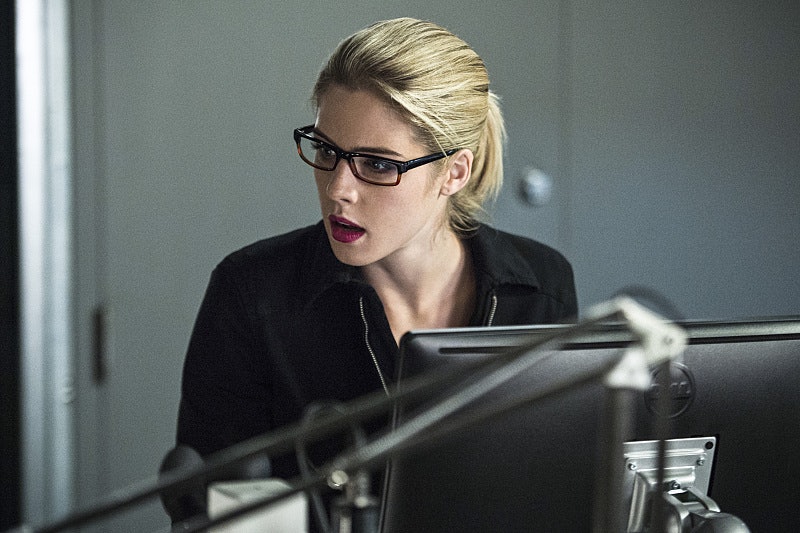 It was a stressful week for the Smoak women on Arrow this week. While Mama Smoak originally stopped by for a friendly visit, Felicity was too consumed with saving Ray to really appreciate any sort of mother-daughter bonding time. And to top it all off, we were also privy to Oliver and Felicity's first major fight as a couple. (Something that I truly hope we will never have to experience ever again.) But all of these problems now seem like child's play in comparison to the dangers that Team Arrow could be facing on the very near horizon. In fact, after this week's episode, I'm now officially worried that Damien Darhk will try to kill Felicity at some point on Arrow .

Granted, I've known for quite some time that Darhk is a force to be reckoned with. He made that very clear with his magical "mumbo jumbo," as Captain Lance likes to say. But now that he's been made aware of who Felicity is (and her close connection to his former captive, Ray Palmer), I fear our favorite tech girl may be in more danger than she's ever been in before. Which, on this show, is really saying something.

Ever since that mysterious tombstone was showcased in the Arrow flash forward scene, I've been sick with worry over who it belongs to. Between how devastated Oliver looked at the grave site and Barry Allen's surprise appearance (he and Felicity were always very close), I feared that she would be the one to lose her life. And now that Darhk has her in his sights, my concerns are more prominent than ever. Darhk has already proven that he shows no mercy to anyone and will go after what he wants by any means necessary.

This could involve using Felicity as a bargaining chip to gain access to Ray's (now human-sized) A.T.O.M. suit. Or he may decide to just abduct her and use her tech skills for his own personal means — with absolutely no intention of returning her safe and sound. Either way, Felicity's future is looking pretty grim right now. Let's hope that the might of Team Arrow will be enough to save her from Darhk's wrath. Now, if you'll excuse me, I have to go eat some of my feelings. BRB.