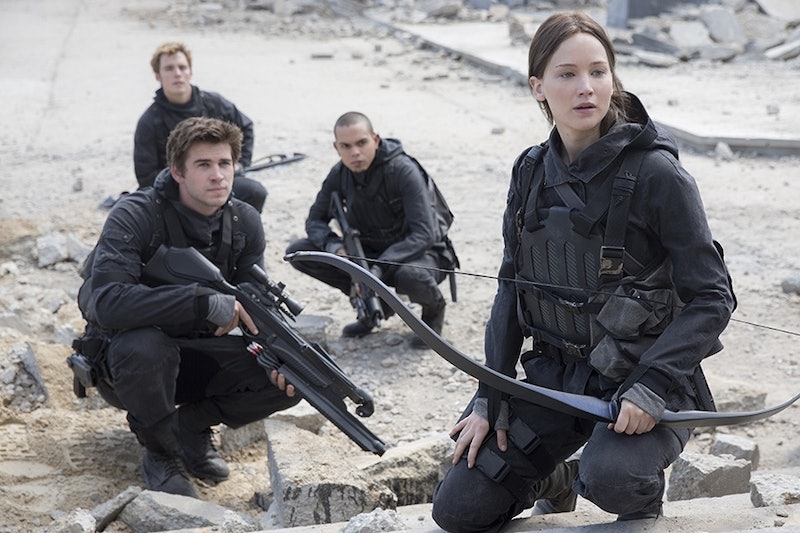 The Hunger Games is, by definition, violent — any adaptation of a book about a teenager forced by an oppressive government to compete in a fight to the death with 23 others is bound to get a little bloody. On the page, the violent Games described in Suzanne Collins' The Hunger Games don't bleed red, but on screen, blood tends to runs freely — as anyone who has seen a Quentin Tarantino movie knows. But audiences looking for excessive gore in the first Hunger Games movie were severely disappointed. While many were worried that the film would be another example of the fetishization of violence in pop culture, the movie and those that followed have done the opposite. The Hunger Games doesn't glorify violence, but presents it simply as a horrific reality.

The Hunger Games saga is able to depict extreme violence without glorifying it by avoiding gore. The first film in particular, as directed by Gary Ross, could be described as violent, yes, but not excessively bloody. Blood rarely makes its way on screen in The Hunger Games . Even during the Cornucopia scene, described as a bloodbath, there is really very little blood that actually makes its way onto the screen. When the Games begin, many of the children rush to the Cornucopia with the hope of gathering weapons and supplies to sustain them through the Games, a single event responsible for the most tribute deaths. Reason dictates it should be the most bloody scene in the film.

Ross shot the entire sequence with a shaky camera and used quick cuts to avoid lingering on gratuitous shots of children being slaughtered. This stylistic choice helped Ross tastefully depict the gross and violent moment, but it also helped him show the chaotic nature of those first few minutes in the Arena. A teenage boy kicks another to the ground and raises a machete to kill him; a young man runs a spear through a girl with pigtails. Some fatal blows are shown in the frame, others just beyond, allowing for only a fraction of blood to be poured on screen. The absence of noise and music also helps to keep the scene from feeling exploitative. The screams of dying kids are not used for dramatic effect, and no music is used to alleviate the tension or manipulate emotions. Instead of confronting the audience with images of excessive violence, Ross forces the audience to imagine it. We picture what the screams sound like, what the little girl's dead body looks like lying in the grass.

This subdued interpretation of the violence in The Hunger Games is what makes it so effective, as seen with Rue's death, which is almost entirely shown. When Rue is stabbed, her wound doesn't spurt red like a paintball. The absence of gore makes the scene about the loss of innocent life, not the injury that causes it. Rue's death, and the death of all the children in the Arena, is shown as a product of a corrupt government and dictator, not of the children that actually commit the killings.

In Catching Fire, the on screen violence escalates with the rebellion. In response to growing rumblings of revolution, President Snow orders that Peacekeepers be sent to the Districts as a show of force. When Gale is whipped by Peacekeepers in District 12, director Francis Lawrence films the sequence from a distance. There are no close-ups of the whip hitting Gale's back, making the violence present but not tangible in a way that might exploit it. The level of violence increases. The gore, however, remains at a minimum.

As the film continues, the violence becomes more overt. When Katniss and Peeta are sent back to participate in the 75th Hunger Games, the killing inside the Arena is treated less delicately than in The Hunger Games. Katniss herself fires the first shot, shooting an arrow through the leg of another victor in such a matter-of-fact way that the audience cannot doubt that it was justified. If The Hunger Games flirts with the line between drama and action, Catching Fire crosses it.

The violence in Catching Fire, and later in Mockingjay, Part 1 , both directed by Francis Lawrence, escalates to the kind seen in your typical war film. As the sides become clearer — rebels good, Capitol bad — the morality of the violence is no longer in question. Capitol soldiers are trying to kill the rebels who want peace and democracy. Katniss and her friends must kill them, in return. War is necessary, the violence is justified, and thus it all becomes a more integral part of the story.

As The Hunger Games transitions into a war film with Mockingjay, Part 1, the amount of violence depicted on screen increases. Mockingjay, Part 1 offers viewers the first truly gory scene in the series. When Katniss and Gale visit District 12 to film a propaganda video, they stand atop a mountain of rubble and the bodies of the dead, burnt to a crisp. Skeletons left from the fire bombs dropped by the Capitol litter the ground to create a gruesome image more explicit than any that came before it.

It's tough to say whether or not Lawrence will continue this no-blood trend in Mockingjay, Part 2 . The final battle set to take up a majority of the film's running time will be brutal, and the horrors of the Capitol's cruel inventions of death are described in the book in detail. If the movie is faithful to the book, it's almost guaranteed that Mockingjay, Part 2 will be the most violent Hunger Games movie yet. Whether or not that makes it just another Hollywood movie capitalizing on America's excessive consumption of violence in media will depend on how the film balances depictions of violence with the reasons behind it.