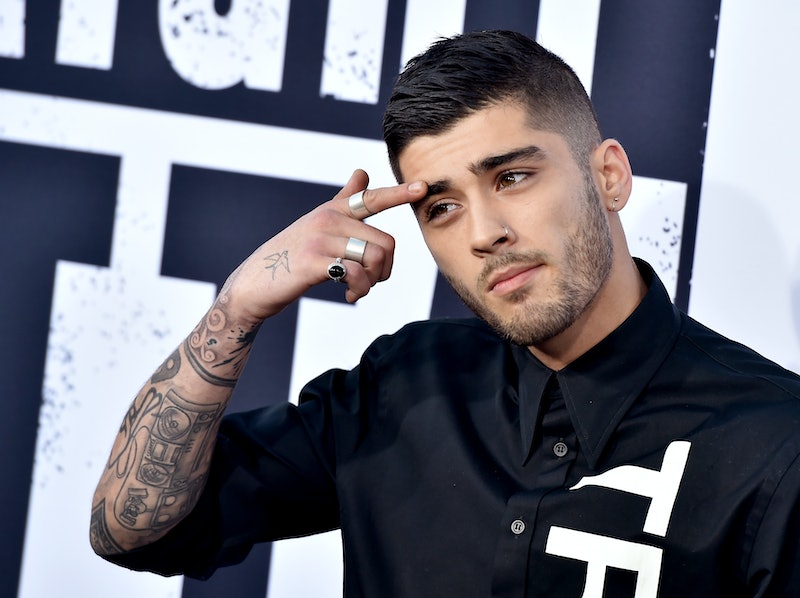 From what I have heard of Zayn Malik’s new song “Befour” it sounds… different And maybe that’s because, after leaving his fellow band mates rather suddenly earlier in the year to pursue a normal life and be with his fiancée, it’s become clear that pursuing music is still a large part of his path as an artist. In a recent interview with FADER , Malik opens up about what feels different about his first solo album after One Direction, his influences, and what he’s enjoyed since his split from the group. But the timing is awfully convenient, don’t you think? The news of a new album coming the same weekend that the new One Direction album, Made in the A.M. is released? The ink hasn’t even dried on the weekend numbers yet, and Malik is releasing a snippet of a new song overlaid with a video in which he is mostly topless? Come on. Clearly this move — and this song — is all about One Direction. Right?

Well, maybe. I mean, there’s the title of the new song, and that super obvious double entendre in all of its suggestive glory. The title could signal the fact that Malik is harkening back to a time before the boy band that made him famous, to a musical style that was his before he was thrust into the public eye on X-Factor, and before his life was consumed with living up to the expectations that fans everywhere had of the band. But there’s also that clever little homonym slipped into the spelling, hinting at the four guys left in One Direction once Malik exited the group and the last One Direction album to feature Malik on it.

But, whether you think the move to announce a new song on the heels of his former band’s album release is rude or just brilliant marketing, it’s clear that Malik and his new song have been majorly influenced by his life before the band and his life during. In the interview with FADER, Malik discusses his musical influences — like Bollywood, ‘90s R&B, and rap — and opens up about how it feels to be done with One Direction. “It’s a nice feeling to come out of a place where you are being told what to do and to be a certain way because of certain expectations of certain things that people want to see,” Malik says in the video with his new song jamming in the background.

But aren’t all artists influenced by their experiences in life? Would it really be so wrong if Malik wrote a song about One Direction, his time in the group, or his decision to leave it? His time with the band is a major component of who he is as a person today, and it would be a little strange if none of his upcoming songs harkened back to that time.

Whether "Befour" is about One Direction or not, it’s about Malik’s life, and, because of that, we should at least give him the benefit of the doubt. Let’s just wait to hear the song in its entirety before we go accusing him of riding his former band’s coattails, mmk?