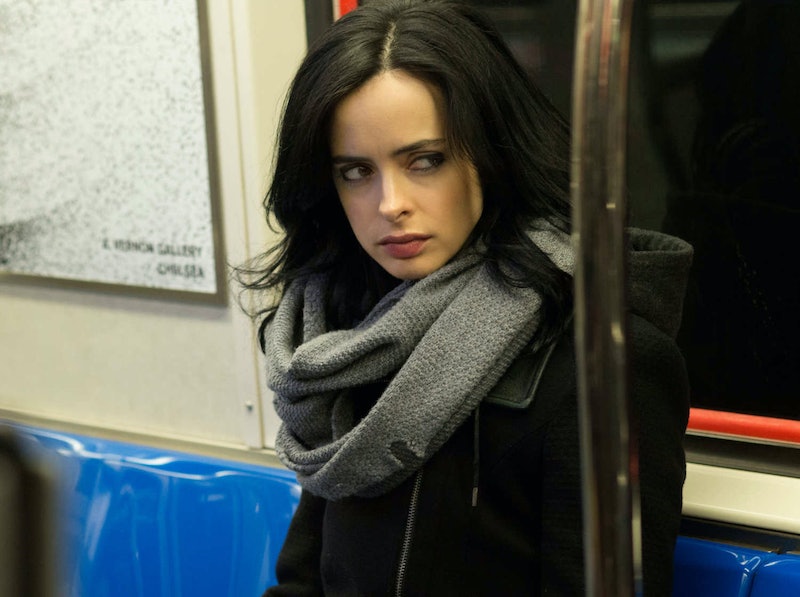 So you've binged your way through Jessica Jones , you've caught up on Supergirl and Agent Carter, and you've signed all the online petitions demanding a Black Widow movie. What now?

Well, if your only dose of kickass female superheroes has been TV and film, you are missing out. I mean, it's great to see super-powered ladies killing it on the big (or small) screen, but there are just so many wonderful women in comic books who deserve their share of the spotlight now. Is the superhero genre still mostly male-dominated? Well, yes, for the time being — all the more reason to get out there and support the great comics focused on female characters.

And I don't just mean the classics like Wonder Woman, Storm, and the Invisible Woman. They're all wonderful (I mean, you try being a superhero and a mother of two), but there are also plenty of female vigilantes who don't get quite so much mainstream love. Now more than ever, people are writing complex super-heroes; characters who don't necessarily conform to every superhero trope. So if you're looking to read up on some of the lesser-known super ladies, here are some great places to start:

Kamala Khan was just an ordinary Pakistani-American girl from Jersey City. She worked a part-time job and wrote Avengers fanfiction. And then (spoiler alert) she got superpowers of her own, and took up the moniker of Ms. Marvel. She's an incredibly relatable character, too (especially if you were a teenage comic book nerd). She, like all teenage girls, struggles with self-esteem, family, pressure to fit in — it's just that she's also a shape-shifting badass who works with the Avengers.

Misty Knight was an NYPD officer until she lost her right arm in a bomb attack. But then she just turned around and got herself a super strong bionic arm (from Iron Man, no less), and started fighting crime on her own terms. She's not just a brawn, though; she's a superb detective and an excellent marksman, and she often teams up with fellow superheroes Colleen Wing, Iron Fist, and Luke Cage to solve the crime. What more could you want in a comic than a super-sleuth with a robotic arm and strong female friendships?

Before Kamala started fighting crime, there was Carol Danvers. She started out as the original Ms. Marvel, but she's since upgraded her title to Captain Marvel. She was an Air Force pilot before she even got her powers, so she's tough as nails, and she serves as an awesome super-powered inspiration to younger women like Kamala Khan (and probably some real life girls, too). Also, she lives in the Statue of Liberty. Don't question it.

You can debate whether or not Alana truly counts as a superhero, but while you do that I'll be having way more fun re-reading all of Saga. No, Alana is not your traditional hero type: She doesn't seek out crime to fight, and she only wears costumes while employed as an actress. But she and her husband are just trying to survive as fugitives and supposed "war criminals," with their infant daughter in tow. Alana is tough, concerned with justice, a trained soldier, a caring mother, and she can fly. Sounds pretty super to me.

Kate Kane is the Jewish, red-headed, lesbian, bat-themed superhero we all wanted to be as little girls. Her comic book run was controversial: Co-authors J.H. Williams and W. Haden Blackman left the series after DC comics didn't want to see Kate marry her girlfriend. (DC claimed that it was because superheroes "shouldn't have happy personal lives.") Controversy aside, Kate Kane is a powerful character who's not to be messed with, and she's great if you're looking for a good old-fashioned caped crusader running around Gotham City.

Yup. It's exactly what you think it is. She's Squirrel Girl! She has squirrel powers! She can talk to squirrels! She has a tail! (And yeah, she totally hides it in her pants, and people think she just has an amble behind). The creators behind this adorable comic are well aware of how ridiculous it all sounds, and they just embrace it. (Really, are squirrels that much sillier than bats?) Squirrel Girl is a hilarious, nutty college student with an upbeat personality, and it's completely impossible not to love her.

Speaking of impossible-not-to-love, there's Kate Leth's brand new Patsy Walker comic (yes, that Patsy Walker from Jessica Jones ). Patsy Walker has been kicking around the Marvel Universe for a long time. She started out as a character in cutesy romance comics back in the 1940s. But the character was then recycled and written into superhero comics as well, and she went from sweet ingenue to the savvy superhero, Hellcat. She's one of the less brooding superheroes, even though she's constantly plagued by her former fame, and she's a delight to read about.

Did you know that Thor had a long-lost sister? Well, her name is Angela, she's a freaking awesome warrior, she's dating a trans woman named Sera, and she's both and angel and a bounty hunter. If you've managed to follow all that, then you should check her out. Angela is not quite as cuddly as some of the characters on this list, but she is an angelic assassin, and a sort-of Valkyrie-type high fantasy super-powered boss, and you probably want to stay on her good side.

9. The Girls From Runaways

Super villains have children, too, and sometimes they run away and start their own teenage superhero gang. And this groups boasts a whole bunch of incredible, underrated young heroines: There's Nico, a goth kid and real life witch. There's Karolina, a vegan and glowing alien disguised as a human. There's Gert, a sarcastic know-it-all with a telepathically linked dinosaur. And there's little 11-year-old Molly, a mutant with super strength. They have no idea what they're doing, but they're some of the most fun, inventive characters in comics nonetheless.