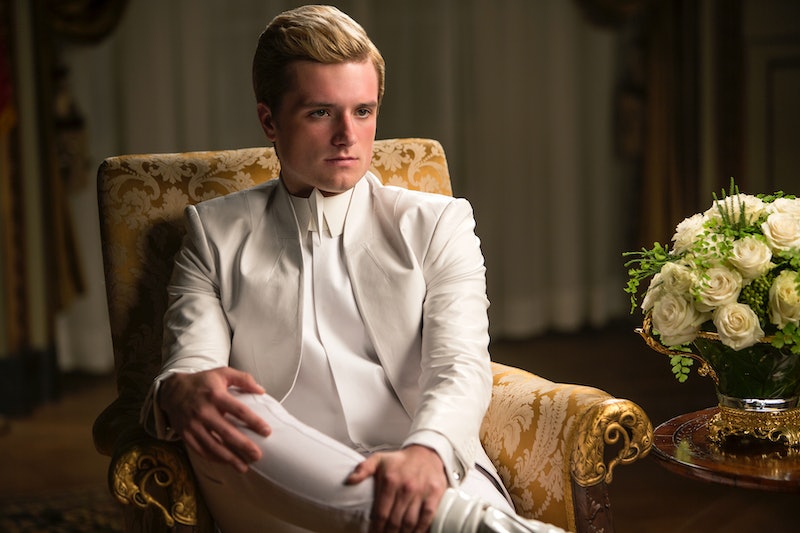 When it comes to The Hunger Games franchise, you are either Team Peeta or Team Gale. The world hasn't been this polarized since the famed Team Edward or Team Jacob debate from days of Twilight. Except with Hunger Games, there is a clear winner, ahem. Let's face it, Peeta wins over Gale hands down. Sure, Katniss grew up with Gale and blah, blah, blah, but Peeta is just an all around good guy and the one for her. Plus, he's a baker! Carbs for life. I'm sure Gale is a good guy, too, and yeah, he's attractive, but he's pretty bland. It's difficult to get invested in a guy like that. As for Peeta, he is charming, cute, proactive, ambitious and has 10 times more personality — and it shows with all of his words of wisdom. From romantic to snarky, there are plenty of Peeta quotes in Mockingjay that need to be featured in the final installment of the movie franchise.

Last time we saw Peeta (Josh Hutcherson) in Mockingjay, Part 1 , he wasn't exactly in the quotable mood... unless you count screaming and grunting as dialogue. He was tied down to a bed flailing about after being rescued from the tortuous and brainwashing hands of the Capitol. But before that, he had some smart and fun quotes that were featured in both the books and movies.

In the book version of Mockingjay, it takes Peeta awhile to snap out of his craziness. Slowly, he gets coherent enough to give fans some of the good ol' fashioned Peeta quotes that we've all grown to love. Here are eight lines that need to be in the movie.

During his brainwashing rehabilitation, Peeta and Katniss play a game of "real or not real" which helps him remember details from his life. This is probably the most precious question he asks Katniss.

2. "Oh, No. It Costs A Lot More Than Your Life. To Murder Innocent People? It Costs Everything You Are."

In a world where young people are killing their peers for sport, these are profound words to live by.

It takes a lot for a person to admit the harsh truth. Peeta is that kind of a man and more.

4. "Yeah, A Lot Of Things Should Count For Something That Don’t Seem To, Katniss.

Peeta is not afraid to drop some serious knowledge. He's like a fortune cookie. He isn't afraid to tell it like it is — even to someone as stubborn as Katniss.

5. "Yes, And If I Could Grow Wings, I Could Fly. Only People Can’t Grow Wings. Real Or Not Real?"

Amidst all the brainwashing, torture, war, oppression, tyrannical rule, and death he's witnessed, Peeta still manages to be a little snarky. It takes an adorable face like his to provide some comic relief and get away with it.

6. "Friend. Lover. Victor. Enemy. Fiancee. Target. Mutt. Neighbor. Hunter. Tribute. Ally. I'll Add It To The List Of Words I Use To Try To Figure You Out."

7. "Never Underestimate The Power Of A Brilliant Stylist."

Ain't that the truth?

More like this
Everything To Know About 'The Hunger Games' Prequel Movie
By Grace Wehniainen and Radhika Menon
Alyson Stoner Says She Went To Rehab After Auditioning For 'The Hunger Games'
By Jake Viswanath
At 14, Jenny Han Wrote Rom-Coms About Her Friends & Fan Mail To Leo DiCaprio
By Alyssa Lapid
The 'Spiderhead' Movie Ending Is Nothing Like The Short Story It’s Based On
By Morgan Leigh Davies
Get Even More From Bustle — Sign Up For The Newsletter