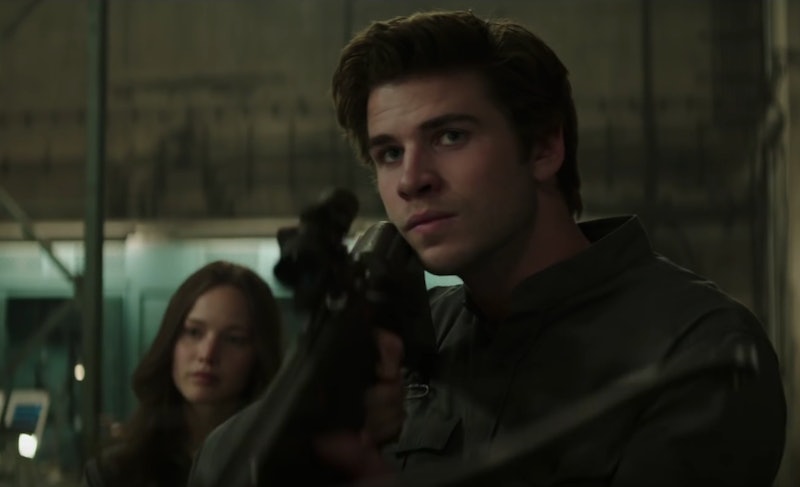 When we first met Gale Hawthorne, Katniss Everdeen, and Peeta Mellark, the residents of District 12 were just struggling to stay alive in the face of poverty, hunger, and an oppressive regime. Now, with The Hunger Games saga coming to a close in Mockingjay, Part 2, Gale is a fully grown soldier, ready to sacrifice his life to take down President Snow and lead the revolt against the Capitol. Fans of the book already know whether Gale walks away from the final battle in the Capitol or is left dying in the streets, but those of you who never read the series are probably wondering, does Gale die in Mockingjay ? (Spoilers ahead!)

Peeta fans will be saddened to know that Gale does, indeed, survive the final rebellion against President Snow. Unfortunately, that's not exactly a win for Team Gale. In the final book, Gale pushes Katniss to become the Mockingjay — the symbol of the revolution — and works with Beetee to develop weapons for the war. Gale's new role in the rebellion was featured in The Hunger Games — Mockingjay, Part 1, and Katniss, of course, was less than thrilled. (Another strike for Team Gale.)

In Mockingjay, Gale is single-minded in his desire to kill President Snow. So, when he and Katniss are placed on the Star Squad — the public face of the revolution — Gale, like Katniss, isn't too pleased. When Katniss tells him with her plan to get Snow herself, he knows there's nothing he can do to stop her, and he tries to keep Peeta safe after they're separated. As the army of rebel soldiers closes in on President Snow, Gale is injured by a sadistic trap set by the Capitol.

But, don't worry Gale fans! He lives to see another day. Unfortunately, the same can't be said for (spoiler) Prim, who dies in a bomb Gale may or may not have built in his efforts to kill President Snow. Prim's death, added to Gale's ambition to lead the rebellion and help rebuild Panem, effectively kills any chances he has with Katniss. (Sorry Team Gale! Better luck next time.)

Gale might not get the girl at the end of Mockingjay , but he does live, and that's more than can be said for many Panem citizens. And, even though it might seem like a defeat for Team Gale, Gale lovers should be happy with the ending. After all, Gale gets to live a life and focus on rebuilding Panem. But, more importantly, all that's known about his future is that he is married and living in District 2, which leaves the door wide open for a spin-off series. Even better — the fan-fiction practically writes itself!