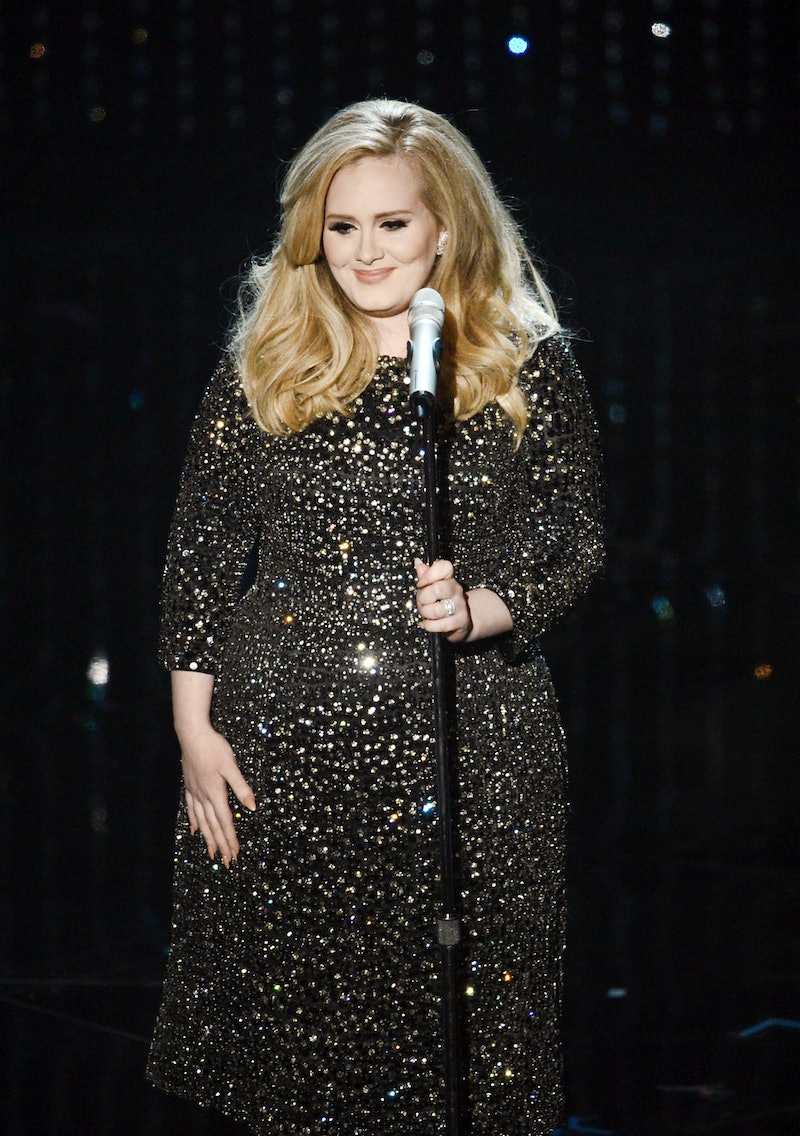 Put "Hello" on pause for a hot sec, because you're going to want to hear this one. British songstress Adele talked about body image during a SiriusXM Town Hall interview with Jenny Eliscu, and her take was entirely blunt, honest, and refreshing. Thank goodness she's out promoting her album that comes out on Friday, because we have missed you, Adele.

"I do have body image problems, for sure, but I don’t let them rule my life at all. And there’s bigger issues going on in the world than how I feel about myself and stuff like that," she said. Her hands-off approach is a new one, but her message is important — although we all have the right to be comfortable with ourselves, there are more important things to spend our energy on, both in our own lives and outside of them.

Adele's uniqueness isn't only in her incredible voice and signature voluminous blonde hair, but also in her candid opinions and willingness to get real, both in her songs and with her fans.

Listen to the clip on SiriusXM's SoundCloud, and while you're at it, check out the rest of the snippets from the interview available online.

Here are three other times Adele's been a total body positive icon:

She Chooses Her Friends Wisely

"I enjoy being me; I always have done," she told Vogue in her October 2011 cover story. "I've seen people where it rules their lives, you know, who want to be thinner or have bigger boobs, and how it wears them down. And I don't want that in my life," she said. Agreed — seriously, isn't it exhausting?

She went on, "It's just never been an issue — at least, I've never hung out with the sort of horrible people who make it an issue. I have insecurities, of course, but I don't hang out with anyone who points them out to me." Wise, wise advice.

She Proclaimed Her Confidence Early On

Adele's taken a body positive approach from the very beginning. In a 2008 interview with The Guardian, just after she released 19, she said, "[My size] doesn't bother me. I'm not naive, I don't believe I need to look like that. I'm very confident. Even when I read people saying horrible stuff about my weight. Until I start not liking my own body, until it gets in the way of my health or stops me having a boyfriend then I don't care. I'm fine."

She Works Out For The Right Reasons

In a recent interview with Rolling Stone, she explained that she's started thinking about her health so she feels strong and ready for her next tour. "[I'm going to the gym] to get in shape for myself, but not to be a size zero or anything like that." She's also cutting back on sugar — Adele, you really are Superwoman. But in sassy Adele form, she added, "I'm not, like, skipping to the f*cking gym. I don't enjoy it. I do like doing weights."