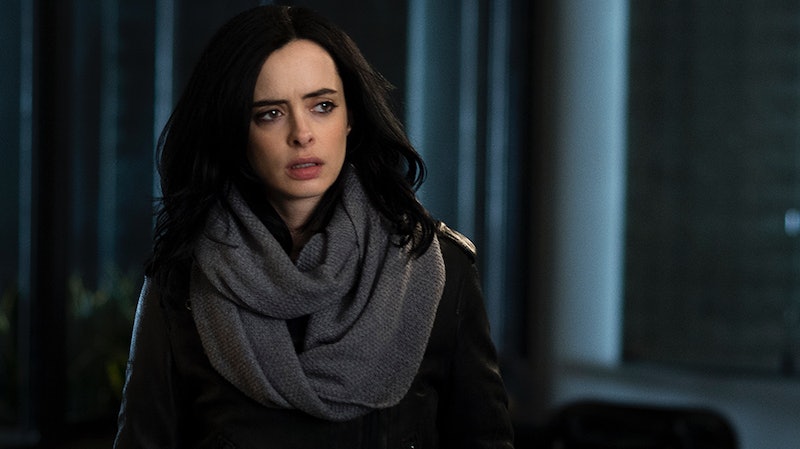 Friday will mark an exciting and historic day for television and comic book fans alike. It's the day that Netflix will premiere its newest collaboration with Marvel, the Krysten Ritter drama Jessica Jones, a show with a much awaited woman superhero. While she may not have a kitschy outfit or a multi-million dollar movie franchise, Jessica Jones is the first response to the pleas for Marvel to green-light projects that star a woman. The superhero world is a boys club, and that's long been the case. There are two Avengers movies, with individual movie franchises for four of the men on the team, but no Black Widow movie. (C'mon. It's 2015.) And, while Jessica Jones looks to be quite the badass sleuth, I think the real hero in this scenario is Netflix.

Since Netflix started acquiring original content in 2011, it's become a haven for strong female characters. It really started to happen for Netflix's original programming when it first aired House of Cards in 2013. In the show's first season, Kate Mara and Robin Wright starred nearly in equal measure with the show's lead, Kevin Spacey. Later that year, Netflix gave a home to what is probably the most female-driven show currently produced, Orange Is The New Black. Both shows were and continue to be critical darlings, earning a slew of award nods every year. It seems as though Netflix quickly noticed something that network, and even cable channels, still don't seem to fully understand — people like seeing strong female characters on TV.

Even in Netflix shows that are seemingly male-dominated, like Bloodline and Master of None, the women play vital roles. There are so many shows on network television that end up getting canceled every season, in part because they depict flat, uninteresting characters, particularly female ones. On Master of None (which is entirely written by two men, Aziz Ansari and Alan Yang), sure, the plot revolves around the life and observations of a man, but the women on the show (even tertiary characters) seem like real people. The ladies on that show have gumption. Noel Wells and Lena Waithe are central to the main character's experiences. The women help drive the plot without the usual tropes of being naggy or needy. They mean just as much to the arc of the season as the supporting male characters, if not more.

Even fantastic, award-winning network comedies like 30 Rock and Parks and Recreation that do have female leads also have a higher number of male characters, almost as if they're attempting to balance out the impact of having one strong woman. In 30 Rock, (one of my absolute favorite shows), Tina Fey and Jane Krakowski are the only female characters who appear in the show's opening credits, where as Alec Baldwin, Tracy Morgan, Jack McBrayer, Judah Friedlander and Scott Adsit all appear. Similarly, with Parks and Rec, Amy Poehler, Rashida Jones, and Aubrey Plaza (and later, Retta after Jones's departure) appear in the main titles, while seven men (Nick Offerman, Aziz Ansari, Chris Pratt, Adam Scott, Rob Lowe, Paul Schneider, and Jim O'Heir) did throughout the show's run. Even FOX's New Girl stars two women and four men. In the network world, it seems as though for every female lead there must be at least two male supporting characters.

Now, sure, there are a lot of business reasons that go into the complicated decision of picking up (or not picking up) a television show. Networks, in particular, have to worry about advertisers and audience responses, while Netflix, a paid subscription service, doesn't have to deal with either of those issues. They don't have advertisers, and, if people don't want to watch one of their shows, they can simply pick something else. This allows Netflix a lot more freedom in their programming. Take, for example, the marvelous Netflix original series,Grace and Frankie, which stars Jane Fonda and Lily Tomlin. Would a network really take a chance on a show about women in their 70s going through divorces? Probably not.

So, yes, Netflix can basically show whatever its executives decide to take a chance on while networks like ABC and NBC have to consider a lot of factors. But the fact that Netflix is choosing to highlight diverse female characters is still worth celebrating. Netflix, in under three years, has started a low-key revolution in television programming. Jessica Jones might seem like a small victory, but it is a victory nonetheless. We now live a world where girls will grow up seeing depictions of strong, smart women portrayed on television, not just the standard lovable but flaky ladies from '90s and '00s sitcoms that I grew up on. I love Monica and Rachel as much as the next person, but there's a reason we all clung to Lorelai and Rory Gilmore.

Netflix is taking chances on the right things, and it's paying off — not just for them, but for the medium of television. It's a brave new world, and it's so exciting to (marathon) watch it happen.

More like this
'Wednesday' Star Emma Myers Thinks A Wenclair Storyline Is “Possible” In Season 2
By Alyssa Lapid
Ashton Kutcher Wants Danny Masterson “To Be Found Innocent” In Rape Retrial
By Jake Viswanath
'The Queen’s Gambit' Season 2 Tweet Wasn’t From Anya Taylor-Joy
By Mary Kate McGrath, Jack Irvin and Grace Wehniainen
Netflix Shut Down 'Bridgerton' S3 Rumours About A “Very Dark” Storyline
By Bustle
Get Even More From Bustle — Sign Up For The Newsletter
From hair trends to relationship advice, our daily newsletter has everything you need to sound like a person who’s on TikTok, even if you aren’t.