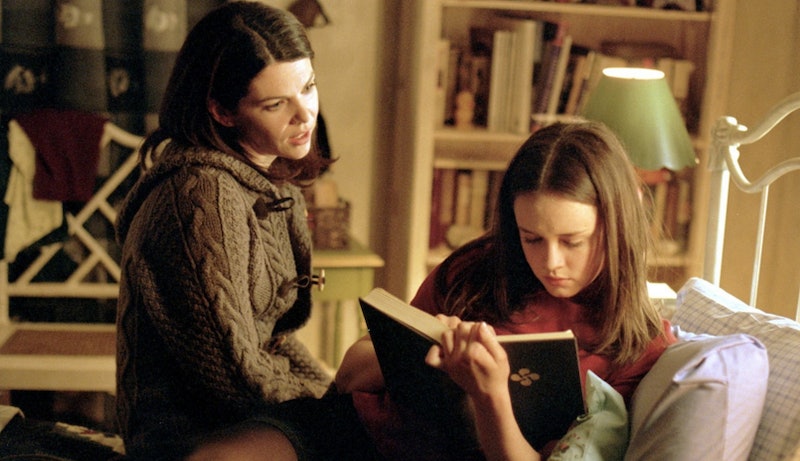 In what has to be the greatest news the world has heard all month — nay, all year… nay ALL DECADE — it is being reported via TVLine that a Gilmore Girls revival is coming to Netflix. That's right, folks — you heard me correctly. Rumor has it that our beloved Stars Hollow gang will be back with a limited series order consisting of four 90-minute episodes/mini-movies, all penned by original series creator Amy Sherman-Palladino and executive producer Daniel Palladino. Seriously, guys, is this even real life right now? Somebody pinch me! Granted, we're still waiting with baited breath for Netflix to confirm the news outright, but in the meantime I can help but obsess over as many details as possible, one of which includes — when would this Gilmore Girls revival premiere on Netflix?

Unfortunately, right now, your guess is as good as mine, but considering that negotiations with the cast — which are already said include Lauren Graham, Alexis Bledel, Kelly Bishop, and Scott Patterson — have only just begun, it's way too early to know for sure when we can expect this wonderful gift to start streaming into our lives. But let's try to look at this objectively…

If this revival follows in Fuller House 's footsteps — which was announced back in April and set to premiere in 2016 — then we could be looking at a GG reunion sometime in the later part of next year, depending on everyone's schedules. This is supported by The Hollywood Reporter's report from an insider that production will begin in early 2016. However, if the series decides to take the longer route and proceed at a glacial pace like Arrested Development did — remember how Season 3 ended in Feb. 2006 and Season 4 hit Netflix in May 2013? — then there could be years of waiting in our future. Seven to be exact. Though, to be fair, there's talk that Season 5 could hit Netflix as early as April 2016, just three years after its last revival. So that's progress!

So, keeping all that in mind, let's estimate that Gilmore GIrls will surface somewhere in the middle of these two extremes. Maybe sometime in early 2017? 2018 at the latest? (Please?) Ugh, seriously, I need to know how to plan the next few years of my life, people! But I suppose, for now, just knowing that it's potentially in the works is going to have to suffice.

Other than its mere existence (which is amazing news in and of itself), very little is known in regards to what these extended episodes will include, though, a big part of me can't help but wonder if Richard's death with somehow play a significant role in the storyline. Because, yes, as exciting as this revival is, it's impossible to not feel sad that one cast member in particular will be missing from this epic reunion, which you know he would've been thrilled to be apart of.

It was just last December that Edward Herrmann, who played the stoic and bow-tied Gilmore patriarch Richard Gilmore, passed away and took a small peace of all of us with him. His absence is something that will have to be dealt with, there's no doubt about it. And it could become the pivotal reason that brings these characters back together, at least for the first 90-minute time frame. So stock up on those tissues now, folks, because when/if Netflix does bestow upon us this glorious revival, a ton of waterworks are sure to ensue. But lead the way, Netflix, and we'll be sure to follow.