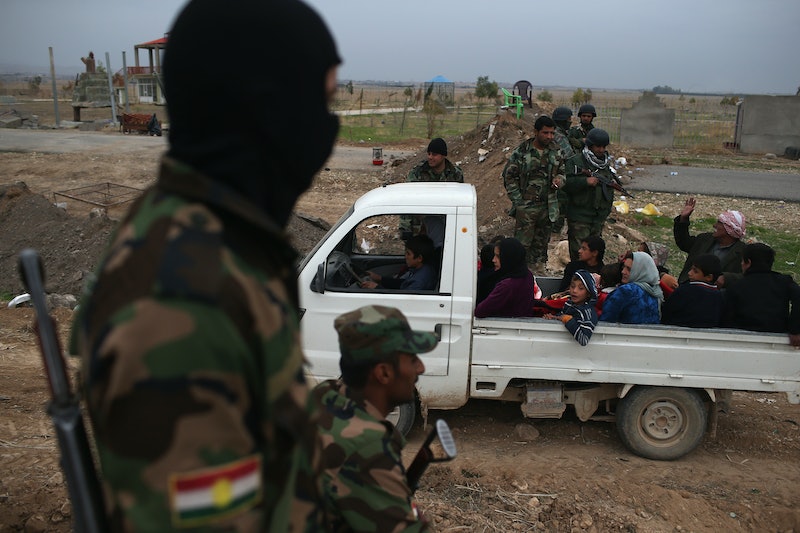 In the wake of last Friday's violent attacks in Paris and last month's attacks in Egypt and Turkey, people around the world are asking all kinds of questions about ISIS, the extremist terrorist group that evolved from a faction of al Qaeda. What will ISIS do next? How can we stop it? Perhaps more fundamentally, it could be important to ask: what, ultimately, is ISIS' goal? The group's mission probably isn't that difficult to figure out, but it's important for understanding its motives — and why it's a threat.

To begin to understand ISIS' goal, you don't have to look much further than its name. ISIS, as the group is often referred to in the media, is an acronym that stands for the Islamic State of Iraq and Syria. Other variations of ISIS' name include ISIL (the Islamic State of Iraq and the Levant) and, more simply, the Islamic State. Whatever variation you prefer, the group's name reflects ISIS's ultimate goal: to create a unified, Muslim territory in order to enforce its extremist beliefs. ISIS also believes it will play a key role in an impending apocalypse, and its activities largely derive from that belief.

ISIS made this goal clear in the summer of 2014, when leader Abu Bakr al-Baghdadi declared the existence of a "caliphate" under his control. In a general sense, a caliphate is a traditional Muslim form of government, in which the leader — or "caliph" — is seen as a political and religious successor to the Prophet Muhammad. Currently, as the acronym ISIS suggests, the Islamic State's caliphate is thought to include several cities across northern Iraq and Syria.

ISIS has become successful in the region by taking over — almost in a colonial sort of way — city by city. ISIS makes money in part by taking over crude oil facilities in the towns that it captures. Essentially, this "state" is building an economy off of captured oil and other criminal activities that bring in roughly $1 million a day, according to some estimates.

Through its territory and its economy — loose terms that shouldn't suggest ISIS is a legitimate state — ISIS hopes to spread an extremist, wholly outdated version of a religion that isn't even recognizable as Islam. ISIS is made up of Sunni Muslims, and most of the cities it controls are filled with large Sunni populations. In fact, most Muslims — as many as 90 percent — identify as Sunnis. The Sunni faction of Islam, as opposed to the Shia tradition, is often considered the more traditional sect. ISIS takes this traditionalism to an extreme level, supporting the treatment of women and minorities as slaves and brutally murdering people of Western cultures and religions in the name of jihad. ISIS' version of Islam is so far removed from any culturally accepted version of today that some experts say it can't even be considered Islam.

"They would like the entire world to be Muslim, but they want the world to be Muslim in a very, very narrowly defined manner," William Beeman, chair of the anthropology department at the University of Minnesota told a local CBS affiliate. "They are fundamentalist Muslims, and their idea of Islam is quite different from the rest of the Islamic world."

Ultimately, ISIS, like any rebel would-be state, wants to spread its reach and amass more territory. In this case, however, that territory would be expected to conform to ISIS' radical ideas and outdated, fundamentalist practices.