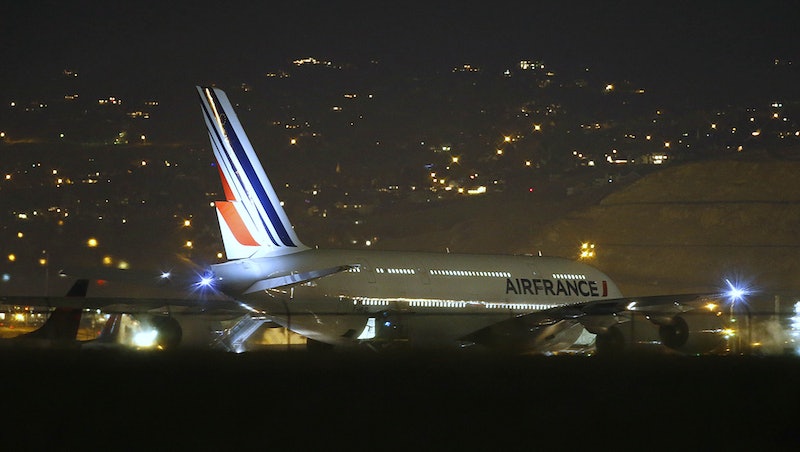 Two Air France flights bound for Paris from the United States were diverted to Halifax, Nova Scotia, and Salt Lake City Tuesday night after a bomb threat was reportedly made against at least one of the planes. Flying is scary enough on its own, and an unexpected grounding can add a whole new level of tension to a seemingly standard flight. Diversions don't often make the news, and they can probably seem much more concerning in the midst of it actually happening, because people generally don't know how often planes are diverted.

Fortunately, the Department of Transportation and Federal Aviation Administration keeps great records of flights — departure, arrival and diversion information going all the way back to 1995 is available to the public online. So far, 2015 is looking about average for the number of diversions, standing at about 0.27 percent of all flight operations. Out of 4,385,712 flights that have been logged with the FAA this year, it's not a bad track record. In September 2015, only 0.15 percent of 464,946 scheduled flights were diverted, which equates to about 698 flights. That seems like a lot, but John F. Kennedy Airport in New York has about that many planes taking off and landing in just one day.

It's even rarer for a flight to be diverted due to a bomb threat. Most recently, a flight out of Frankfurt, Germany was bound for San Francisco on Sept. 11 when it returned to the Frankfurt Airport after a bomb threat arrived via email. A thorough investigation was completed, but no explosives were found on the plane. A similar case happened in January, when a tweet from a hacker group "Lizard Squad" grounded a plane that was also carrying Sony Online Entertainment President John Smedley. Ultimately, no explosives were found onboard.

It's much more common for a diversion to happen due to bad landing conditions, a medical emergency, or a rowdy passenger than a bomb threat. Just on Tuesday, there were dozens of domestic flights diverted for minor reasons that never made the news. Thankfully, this isn't an ordinary situation and the chances of it affecting the average commercial flight are minuscule.

The flight that was diverted to Salt Lake City was given the all clear by 11:31 local time and will continue onto Paris. As of midnight Wednesday, the condition of the plane in Halifax is not yet clear. While most diversions are simply an abundance of caution, everyone knows it's better to be safe than sorry.

More like this
Watch Jacinda Arden’s Devastatingly Honest Resignation Speech
By Sam Ramsden
The 3 Best Heated Steering Wheel Covers
By Margeaux Baulch Klein
Marianna Hewitt’s Advice For Building A Personal Brand
By Taylor Jean Stephan
Grenada Is The Ultimate Caribbean Hotspot For Relaxation & Adventure
By Hannah Orenstein
Get Even More From Bustle — Sign Up For The Newsletter
From hair trends to relationship advice, our daily newsletter has everything you need to sound like a person who’s on TikTok, even if you aren’t.