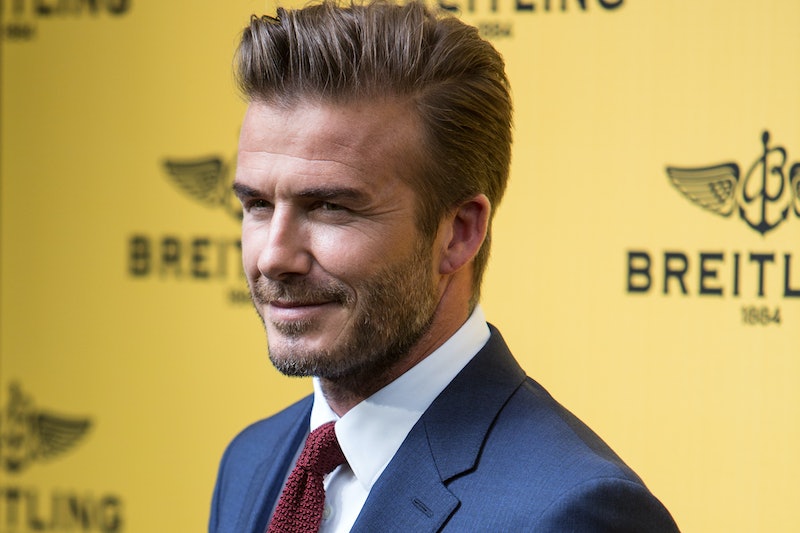 After days of arguments that were almost enough to tear friendships and families apart, the question of who will be People's Sexiest Man Alive of 2015 has finally been answered. Of course, David Beckham being the Sexiest Man Alive is the kind of thing that makes people go, "Wait — Really?" Not because they're angry or because they're confused (I mean, he's no Chris Pratt, but he's David Beckham so who can complain?), but instead because, well, what has David Beckham done in 2015 to make him so sexy? It's pretty common knowledge that the man whose face hits the cover is usually coming off a high stint of projects or has a high stint of projects coming up, in addition to being conventionally attractive. However, some might have missed the fact that Beckham had a lot of moments in 2015 that make him more than worthy of the honor in that respect as well.

Whether you think of Beckham as that amazing former football player, or as Posh Spice's husband, or as that gorgeous model, he's got something to offer everyone who calls themselves a fan. And 2015 was a pretty good year for him, for a variety of reasons that are now all capped with the honor of being Sexiest Man Alive. But don't take my word for it. Check out these eight moments that prove he deserved this award.

1. When He Appreciated Family Time

Beckham never says no to a meal with one of his kids when he gets the chance, and 2015 was no different. Even better? When he couldn't get through the meal without becoming a sucker for dad nostalgia.

2. When He Congratulated Queen Elizabeth II For Becoming The Longest Reigning UK Monarch

Surpassing the reign of your great-great-grandmother is no small thing, and David Beckham knows that. So when Queen Elizabeth II officially received the title of longest-reigning monarch of England in September, Beckham celebrated the event by posting a throwback to his own hang sesh with the Queen.

3. When He Dedicated Basically All Of His Time To Supporting UNICEF's Mission

Beckham's no stranger to charity work: this is the star's tenth year as a UNICEF Goodwill Ambassador. It was in 2015, though, that Beckham launched 7: The David Beckham UNICEF Fund, which he calls his "personal commitment over the next decade to helping children who need it most."

4. When He Got On The Social Media Bandwagon By Waking Up In Bed With Us

Is he kidding with this photo? Someone help.

5. When He Introduced The Rest Of The World To A Mister Whippy

OK, actually I take back what I said. He's not kidding.

6. When He Respected The Universal Truth That Is Bunny Ears

Is there anything that can draw people, and even nations, together more completely than the simple joy of giving someone bunny ears in a photo?

7. When He Expressed Love For His Lady

Don't lie and tell me that they aren't your relationship goals.

Beckham officially entered "silver fox" status this year, even if he doesn't have the head of hair to prove it just yet. How can anyone doubt, now, that he is definitely worthy of being Sexiest Man Alive?