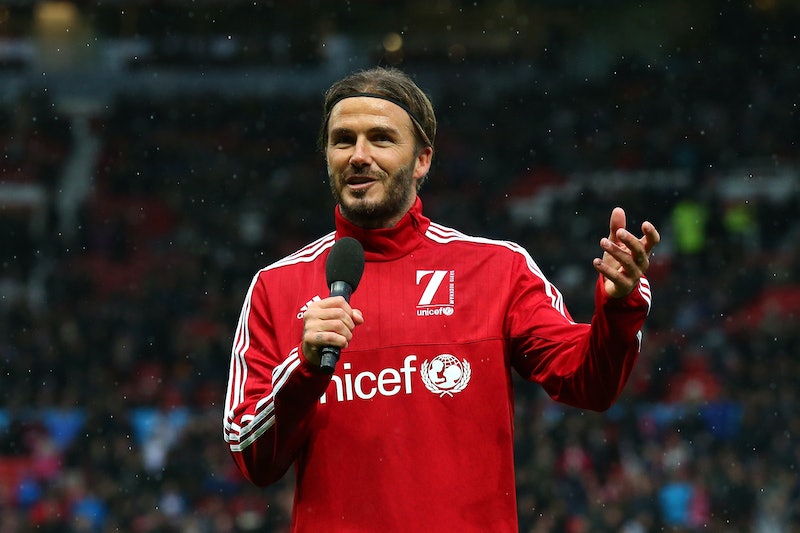 People's Sexiest Man Alive list is something I look forward to every year, because it's always fun to see which of the many guesses that were tossed around at home or at work came the closest to being true. When David Beckham became the Sexiest Man Alive of 2015, my first thought was, "You're not Chris Pratt," my second thought was, "Okay, I can agree with this," and my third thought, as always, was, "I wonder how many men of color almost made the cover." It's a thought that I have every year, especially since a man of color has not made the cover of People magazine since I was 6 years old in 1996, and, this year like most years, it was a question with a disappointing answer.

On the top 10 list for 2015, Idris Elba comes in at fourth place, and Jussie Smollett comes in at eighth place. They are the only two men of color in the top 10. This is disappointing to compare to 2014, although 2014 also had only two men of color in the top 10. The problem is that the first of them, Ki Hong Lee, came in at a high of third place, while the other, Michael Strahan, came in eighth. Of course, none of these are as disappointing as in 2012, when Channing Tatum's cover marked an instance in which Denzel Washington (#9) was the only man of color on the top 10 list. However, it's still disappointing to note that the closest that a man of color has come to making the cover in the last five years was in 2013, when Idris Elba came in second on the list.

That was the first time since 2010, and the only time since, that a man of color has gotten that close to making the cover, and that begs the question of why. Especially when you acknowledge that, in that same stretch of time, the highest amount of men of color to make the top 10 list has been three — once in 2010, and once in 2013. It can't be a matter of lacking available stars. This year in particular had Michael B. Jordan in two highly-anticipated films, one of which involved a new interpretation of a longstanding comic book character as Johnny Storm. There is also, in addition to Jussie Smollett, Bryshere Gray and Trai Byers from Empire. Drake is having one hell of a year musically, all without having released Views From The 6 yet. Jason Momoa is going to be our next Aquaman. And so on and so forth. Any or all of these men could have made the top 10, but they didn't, and I'm still asking why.

It's just a natural fact of life that white men are going to be overly represented on lists like this, but I don't want to keep accepting that as a "fact." I want that to change. I want to look at People's Sexiest Man Alive list each year and see various representations of what sexy looks like, across different cultures. I want to know that being the Sexiest Man Alive doesn't usually mean you have to be blonde-haired, blue-eyed, and, most importantly, white. I'd love to see that change start with 2016's cover, so we can see a Sexiest Man Alive who is also a man of color. I'd love to see that change end the streak of having nothing but white men topping the list each year. But, at this point, I'm becoming rapidly willing to just settle for more than, optimistically, 30 percent of the top 10 list be men of color. Dare I dream of a day when men of color make up the 70 percent for once? Dare I?

At the end of the day, different people have very different ideas of what makes a person sexy. The Sexiest Man Alive list is at a permanent disadvantage in trying to represent as much of those polarizing opinions of sexiness as they can, so they're obviously not going to be able to please everyone. However, I do think that more effort could, and should, go into not representing as many white actors, musicians, models, and entrepreneurs as humanly possible — at least not in the top 10. There are so many people from so many cultural backgrounds doing great work in Hollywood and being all different kinds of sexy while doing so. I'd love to see them get more representation in the top 10 in the future. I'd love to be able to ask myself, "I wonder how many men of color almost made the cover," and not be disappointed by the answer.