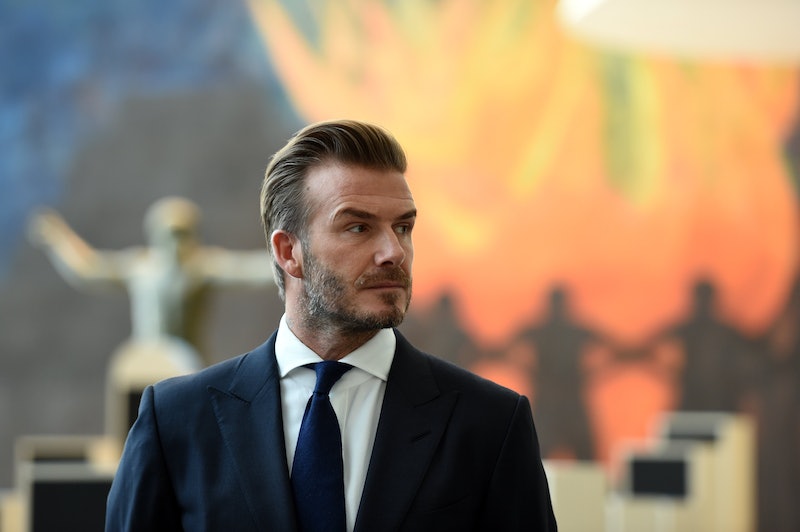 Behind every PEOPLE's Sexiest Man Alive is a solid hairstylist! Or in some cases, make that hairstylists. Who is PEOPLE Sexiest Man Alive David Beckham's hairstylist? Well, the answer is not so obvious. It seems the footballer doesn't have a single or consistent stylist and that he has employed multiple people to maintain his coif over time.

Becks' famously fabulous hair appears to be done by committee and he likes swapping stylists.

Or maybe he isn't into sharing the details about his secret weapon aka the stylist who designs his strands. What we do know, definitively, is that David Beckham's hair evolution is something else and inspires tons of follicle envy.

Beckham, who is the son of a hairdresser and who once chopped off his longer hair as part of his Brylcreem endorsement, can be counted on for a variety of fresh, modern, and on trend looks, ranging from the faux hawk to peach fuzz to slicked backed to layered. He is nothing if not memorable.

His 2002 mini mohawk is one of Beckham's most famous 'dos and that coif is credited to hairstylist Adee Phalen. Phalen, who is heavily tattooed, just like his most famous former client, admitted that the soccer player's wife Victoria Beckham asked him to come aboard as Becks' hairdresser in the early aughts. He eventually moved on.

Phelan also admitted that Becks' double British GQ cover looks in 2002 weren't his idea! They were conceived by the client himself.

So it's almost as though Beckham is his own damn stylist!

Also, stylist Ben Cooke cut both David and Victoria Beckham's hair between 1999 and 2006. So he clearly doesn't commit to one person when it comes to that coif.

Also, according to GQ, as of 2011, the soccer superstar worked with Alain Pichon, who gave him the longer, side part style that he has been rocking for several years now.

So while dudes ISO David Beckham-like hairstyles can't really hire "his" guy, there are still plenty of Internet inspo sources to help replicate D. Beckham's 'do.

More like this
Why “Patch Snatch” Ponytails Are Everywhere Right Now
By Tomi Otekunrin
Kim Kardashian Chopped Her Platinum Hair Into A Lob
By Olivia Rose Ferreiro
Regé-Jean Page On The Art Of Power Napping
By Paris Giles
The Secret To Taylor Swift’s Fringe, According To The Experts
By Orla Pentelow
Get Even More From Bustle — Sign Up For The Newsletter