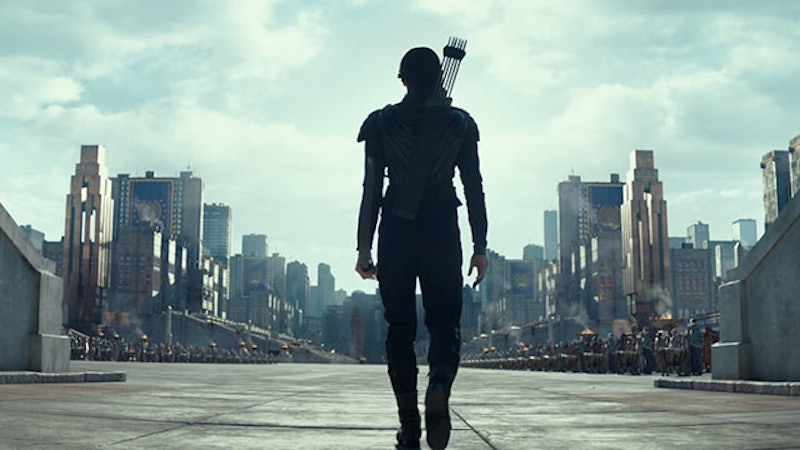 When a movie is responsible for wrapping up an entire franchise and satisfying millions of fans, it's be understandable if it didn't follow its source material to a T. Sometimes taking liberties in plot and character are needed in order to give audiences the conclusion they want. Yet in the case of Mockingjay, Part 2, the movie actually follows the second half of Suzanne Collins' novel's pretty closely, especially when it comes to the dialogue. So many Mockingjay, Part 2 quotes from Peeta, Katniss, and the rest of Panem's finest feel straight out of the book, but they pack a punch that can only be felt due to their on-screen presence. The film has its fair share of powerful, memorable lines, and hardcore fans and newcomers alike will leave their screenings with the quotes reverberating in their minds.

But of course, when a movie's over two hours long as this Hunger Games finale is, you'd be forgiven for not remembering every little statement and suggestion you heard during the course of the viewing. So, without further ado, here are the 21 best quotes from Mockingjay, Part 2 , in theaters now. Obviously, spoilers!

Said by a hijacked Peeta to Prim early on the film, this line is devastating, as it shows just how much anger and terror the Capitol implanted in the normally nonviolent Peeta.

A horrified Katniss tells herself that the deadly man in front of her is not the Peeta she knows, but a monster created by the Capitol.

When Gale says this to Katniss, it hints at the soldier he's become, and why they'll never truly be together.

As Katniss is held at gunpoint by a furious rebel, she calms him down by telling him that they're all on the same side, being slaves of Snow. The rebel argues that he's not a slave, but an exhausted, heartbroken Katniss says, "I am."

5. "All I Know Is That I Would've Saved Myself A Lot Of Suffering If I'd Just Given That Bread To The Pig."

Peeta, breaking Katniss' and everyone's hearts with this cruel line.

6. "Anybody Can Kill Anybody, Even A President. You Just Have To Be Willing To Sacrifice Yourself."

Gale passes along this piece of "advice" to Katniss.

7. "Ladies And Gentlemen, Welcome To The 76th Hunger Games."

Finnick sarcastically gives this name to the mission carried out by the squad, and unfortunately, it seems fitting.

As Peeta slowly breaks free of his conditioning, he tells Katniss that he's still not sure what to believe, and thus, their game of "real or not real" is born.

But despite his effort, Peeta is still terrified that he's capable of harming those he loves and unfortunately, he's right.

One of the movie's few moments of levity comes when Coin interrupts Snow's broadcast to share her own message. When she repeats one of his phrases, Snow, watching from his home, gets irritated that she misstates a word.

When Peeta and Katniss' game takes on its official title, it's just as emotional as in the books.

Another Peeta and Katniss moment, said right after the duo kiss, this one is everything.

In a darker moment between the pair, Peeta says that their lives were never theirs to live, just weapons for the Capitol. It's a sad, painful realization.

OK, OK, just one more Peeta and Katniss one for now. It's too heartbreaking not to include!

15. "We Both Know I'm Not Above Killing Children, But I'm Not Wasteful."

Here's a change of pace: Snow, being evil and snarky while talking to Katniss.

16. "Mockingjay, May Your Aim Be As True As Your Heart Is Pure."

Coin is definitely gonna regret these words of advice she gives Katniss before the planned execution of Snow.

Only Haymitch would be this amused after Katniss kills a president and topples a government.

Soon after, Katniss and Haymitch discuss what happens next, not an easy question when they've just completely changed the country and won a revolution.

Although Effie doesn't get much screentime in Part 2, she does get to have a touching moment with Katniss before they leave one another, possibly for good.

Peeta and Katniss are together, and he finally gets the answer he's always wanted. #Peenis4ever

In the final scene of the movie, an older Katniss tells her baby that they both get nightmares (how... sweet) and promises that the infant will have a better life than the violent one she and its father led. It's a powerful line, coming from the Mockingjay, and it hits hard.

Whether you're a longtime fan or total newcomer to the franchise, Mockingjay, Part 2 will undoubtedly resonate with you strongly, long after you leave the theater.