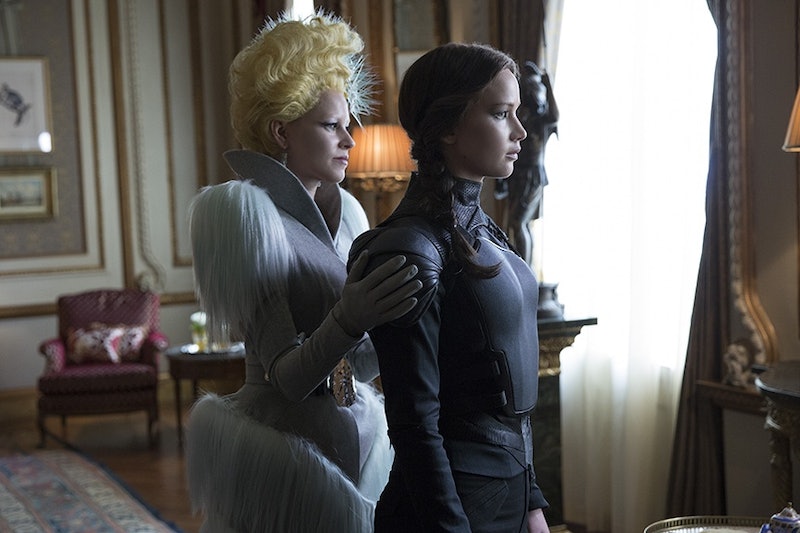 The Hunger Games saga is coming to an end. I know it hurts, especially for fans who grew up reading the series by Suzanne Collins and waiting in line to see the movie adaptations at midnight. But with the release of Mockingjay, Part 2 right around the corner, it's time to face the fact that Katniss' fight against the Capitol is entering its final chapter. The only thing that remains to be seen is what events actually make it into this last on-screen installment. With the decision to split up the last Hunger Games book into two feature films, fans hoped their favorite moments or characters from Mockingjay would make it to the big screen. But, as seen with Mockingjay, Part 1, some things just won't make the cut. Here are seven Mockingjay scenes that need to be included in Mockingjay, Part 2 .

While fighting Capitol loyalists in District 2, Katniss challenges those opposed to the rebellion to shoot her. She promises not to shoot because she doesn't want to be a killing machine for the Capitol anymore. Unfortunately, someone in the crowd calls her bluff and shoots her. Katniss is left spleen-less and with bruised ribs that takes her out of the field for a month. It's a moment in which Katniss proves she doesn't want to kill people. She doesn't even want to cause a war. The only person she wants dead is President Snow, and if a revolution is the only way to make that happen, then that's what she does.

After being hijacked by the Capitol, Peeta returns to Katniss and District 13 with an intense desire to kill her. He struggles with his instincts throughout the second half of the book, and, in one fit of rage as he and the Star Squad are infiltrating the Capitol, he kills Mitchell, a member of the Squad. Not only is Mitchell a tragic casualty of the revolution, but his death also weighs heavily on Peeta, who blames himself.

Peeta Asks Katniss To Kill Him

Once Peeta becomes more aware of how he was hijacked by the Capitol, there are moments when he looks Katniss in the eye and asks her to kill him. He doesn't want to hurt her, and is worried he won't be able to stop himself. As much as I hate seeing Peeta in pain, heartbroken, puppy dog Peeta is kind of the best Peeta.

Girl power abounds when Katniss and Johanna bond while training to fight in the rebellion. Hopefully Mockingjay, Part 2 will allow their friendship to blossom, or at least let them kick some Capitol butt together!

Real Or Not Real

Obviously, the tragic romance between Peeta and Katniss has to be included in Mockingjay, Part 2, and the only way to do that is to include "Real or Not Real." "Real or Not Real" is a game Peeta plays to try to understand which of his memories of Katniss were fabricated by the Capitol and which are, well, real. I'm not too worried this won't end up in the film, but it would be a crime to leave it off the list.

In Mockingjay, Gale becomes a crucial member of the rebellion, helping develop weapons that almost match the Capitol in scope and destruction. Katniss does not approve of Gale's apparent disregard for human life, and it's just one of the many things that drive them apart in the final Hunger Games installment. It wouldn't be fair to Team Gale to leave Gale's role in the war out of Mockingjay, Part 2, especially as it relates to Prim's death.

The end of Mockingjay sees Katniss and Peeta living peaceful, but no doubt dysfunctional, lives in District 12. Away from the new Panem, they have a family and grow old together. It's a bittersweet ending, but one appropriate given the years of trauma both characters have been through. Even if the epilogue isn't exactly as it is in the books, I hope Mockingjay, Part 2, shows Katniss and Peeta in the future to give fans some peace of mind. (Also, lots of kisses.)

Even if none of these things appear in Mockingjay, Part 2, there's no doubt the movie will be full of Katniss goodness, and that's really all any fan needs. Besides, there's always fanfiction.

More like this
Everything To Know About 'The Hunger Games' Prequel Movie
By Grace Wehniainen and Radhika Menon
Yes, Joseph Quinn Is Actually Playing The Guitar In This Epic 'Stranger Things' Scene
By Alyssa Lapid
At 14, Jenny Han Wrote Rom-Coms About Her Friends & Fan Mail To Leo DiCaprio
By Alyssa Lapid
Everything You Need To Know About The 'Knives Out' Sequel
By Grace Wehniainen
Get Even More From Bustle — Sign Up For The Newsletter