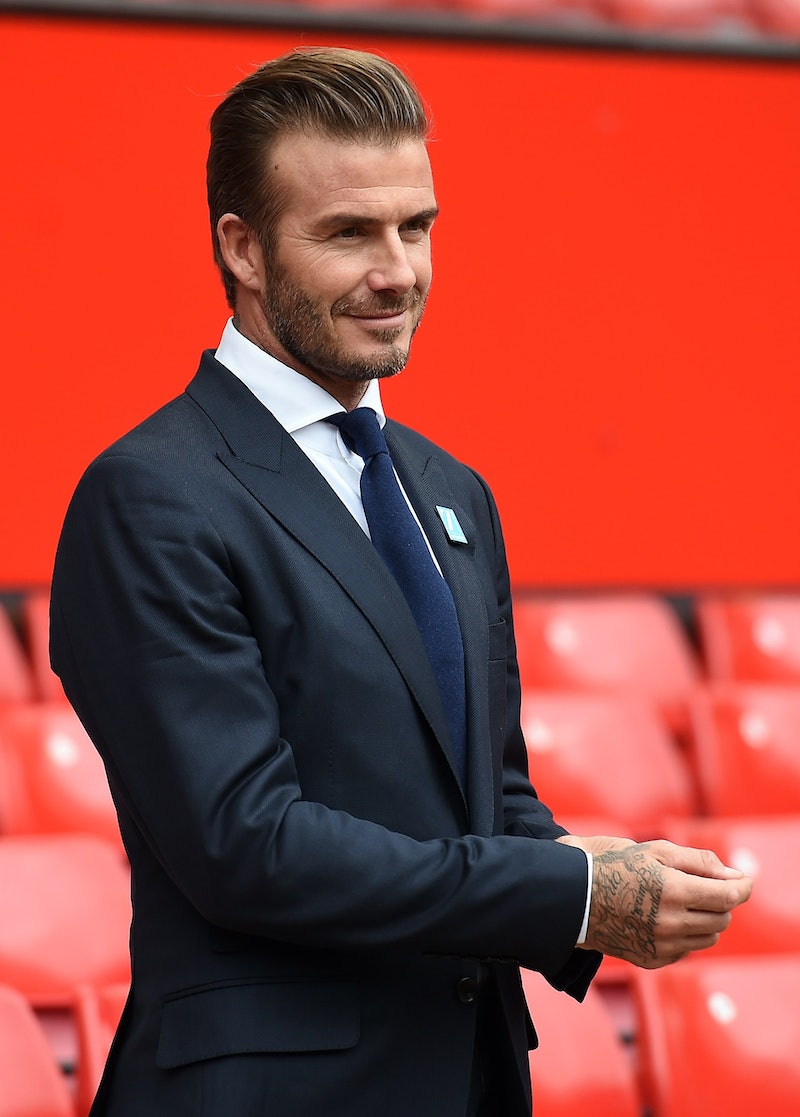 If David Beckham is one thing — besides an immensely talented soccer player and someone who is absolutely deserving of a "World's Best Dad" coffee mug — he is hot AF. It goes without saying that the 40-year-old athlete is ungodly sexy, with his ruggedly handsome good looks, collection of badass tattoos, and loving — if unfairly attractive — family. With all that in mind, it kind of makes sense that he'd win the title of People magazine's 2015 Sexiest Man alive, right? Not so fast. Sure, Becks' undeniable beauty scores him the Sexiest Man Alive honor pretty much every day across the masses of Beckham fangirls, but since People usually picks a subject who has had massive career success throughout the year (no shade at Beckham, but the winners usually have blockbuster film after blockbuster film under their belts that year), this choice is leaving many fans scratching their heads. And in fact, many people are asking why: Why is David Beckham People 's Sexiest Man Alive?

Though People has not yet revealed the reasoning behind their 2015 pick, Beckham's non-actor status could have something to do with it — you know, to shake things up just a bit. Of all the Sexiest Men Alive since the magazine's inaugural issue in 1985 (Mel Gibson won the coveted title that year), Beckham is the first athlete to win the award, an honor historically won by actors. (Beckham joins Adam Levine and John Kennedy, Jr. as the only non-actors to win the title).

But most importantly, let's look at the magazine's criteria for their Sexiest Man Alive choices and go from there. How People editor Julie Jordan explained it to USA Today, the editors at the mag "watch these guys over the year, and someone always bubble to the surface," adding that they also make the decision based on editor reactions and reader reactions — you know, they pick the male hottie that the women "respond" to the most. And Beckham... well, let's just ring the alarm right then and there.

In 2010, People managing editor Larry Hackett told ABC News that the Sexiest Man Alive criteria works like this: "We know it has to be a mix of someone who's hot but well-known. Not too young, not too old and somebody who, frankly, maybe we haven't thought of." David Beckham certainly checks all those points: He's unyieldingly attractive, and at 40, appeals to women of all ages. And, not being an actor starring in some crazy successful film that year, he wouldn't be the first pick based on the mag's choices in the past.

"Sexy certainly has to do with someone being good-looking, and has to do with a certain kind of romantic, flirtatiousness physical appeal that may be beyond just academic appreciation of the way they look," Hackett continued. "We want some mystery in our sexiness."

And, to be fair, Beckham may have hung up his cleats — but the soccer pro's celebrity is still going strong in 2015. He's made headlines for his social media presence (he is the third most-liked athlete in the world on Facebook), his long-lasting relationship with Victoria (he and Posh Spice celebrated 16 years of marriage this year; Beckham honored the occasion with a tattoo), his aw-inducing role as Dad to his brood of kids (see: anything he posts on Instagram ever), and his extremely important charity work, teaming up with UNICEF (for which he has been an ambassador for 10 years) to launch a "groundbreaking" initiative in 2015 to help save children all around the world from danger.

It's significant to note that the magazine still has a long way to go in terms of diversifying their Sexiest Men Alive — an important point that should not be discounted — and Beckham scoring this year's title certainly isn't breaking the mold of middle-aged white men who have won in the prior years before. But, he is an athlete (a first for the magazine), and a surprising choice in other ways. And ultimately, he still fulfills the magazine's most important qualification: He is just plain sexy.