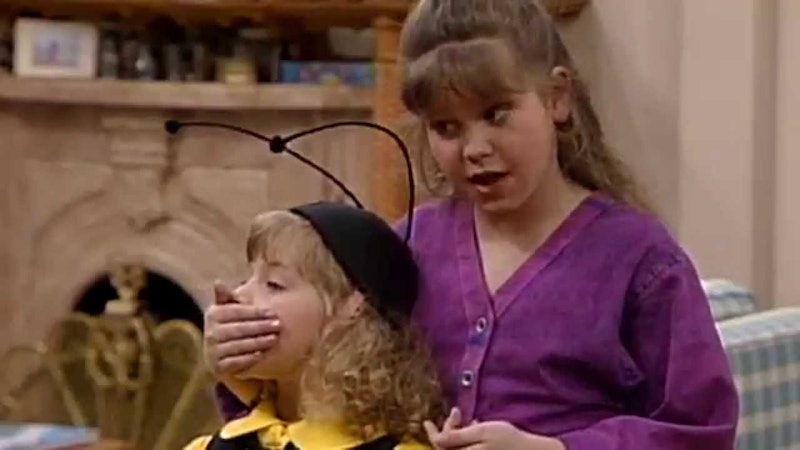 When you grew up in a family with a bunch of kids, you learned a few things right off the bat. You figured out which back corner of the fridge to hide your fave Oreo crumble-y yogurts; your learned how to entertain yourself with pulling blades of grass out of the unsuspecting earth when you got stuck at someone else's soccer game; the first complete sentence you uttered was probably some variation of "She started it!" or "It's my turn." As much as we adore and appreciate our big families, growing up in one is its own loving version of The Hunger Games, except that nobody ever wins — at least, not until you've all grown up enough not to crane kick each other over computer time.

But sibling-hood, like most relationship dynamics, has changed over the past few decades. The fights I see kids getting into now are nothing like the fights I got into as a child. I once saw a small toddler bite his brother over a smart phone. If I'd seen a smart phone at that age, I would have been too busy wetting my pants to bother getting all vampiric on someone's ass. Clearly the times are a-changin', and I almost feel bad for the kids who were born into all this fancy tech. They will never know the '90s struggles, or these many fights we had with our own siblings that these newbies will never understand:

When Someone Ate The Lunchable You'd Been Coveting All Week

The deep dish pizza ones were my jam, and I still haven't forgiven my brother for mindlessly eating one out from under me some 15 years ago. Sleep with one eye open, Evan.

When Someone Taped Over Your Favorite Episode Of Dragon Ball Z

NO RESPECT. Robotech was the yellow Starburst of Toonami and everybody knew it. Nobody should have been taping it on a blank VHS, let alone the episode where Gohan goes Super Saiyan.

The only thing that balanced out your murderous rage of getting your dream about being BFFs with Melissa Joan Hart interrupted was watching the light die in your siblings' eyes as the lights flickered on in your parents room just before they got in ~trooouuubbleeee~.

When Someone Tried To Hack Into Your Voice-Controlled Password Diary

I mostly just used this to hide stickers and the one or two Deeply Prolific Thoughts I had at nine years old, which was probably for the best, because my brother hacked into it by saying "ducky" in a high-pitched voice on the third try.

When Someone Hogged The One Razor Scooter

Plus, like ... it's not as if you can chase them. It was the '90s equivalent of having superpowers.

When Your Parents Told You To "Share" Pokémon Cards

Honestly, the shared custody of a Pokémon card was more emotionally charged and fraught than figuring out custody of an actual, living child. My mom eventually had to lock up our one Mew card in a vault. I still am too afraid of its power to ask where it is.

There was none of this "text me when you're done" nonsense when we were growing up. Your parents each had a cellphone, and if several of you were going to a swim meet or some place without a set end time, one of you was given the Ultimate Responsibility of carrying around one of the prized family phones to call when you were finished. The pressure was enormous. The power went to your heads.

It took your parents approximately one bajillion hours to get you looking Talbots Kids Fleek for the family picture, and after that it was six hours of torture while they promised they'd take you to Chuck E. Cheese if you were good. Finding out there was a Judas among you who wrecked all the disposable camera pictures, leaving you to do the whole thing all over again, was the ultimate betrayal.

When Someone Played Backstreet Boys On Their Boombox Too Loudly

They did NOT want it that-a way.

When Someone Wouldn't Let You Play On The Nintendo With Their Cooler, Older Friends

How were we supposed to get better at Super Smash Bros if nobody ever let us play? It wasn't our fault if we only ever picked the Ice Climbers and aggressively hit Control + Z until someone had the sense to wipe us out of the game.

"GRANDMA ALREADY KNOWS YOU LOVE HER, SHUT UP AND LET ME GET ON AIM WITH MY FRIENDS."

When Someone "Accidentally" Ripped The Tag Off Your Beanie Baby

I love my littlest sister, but I'd probably love her a little more if she hadn't gummed at my Very Fancy Super Brag-worthy Prayer Bear in the late '90s. Toddlers are the worst. #NeverForgive. #NeverForget.