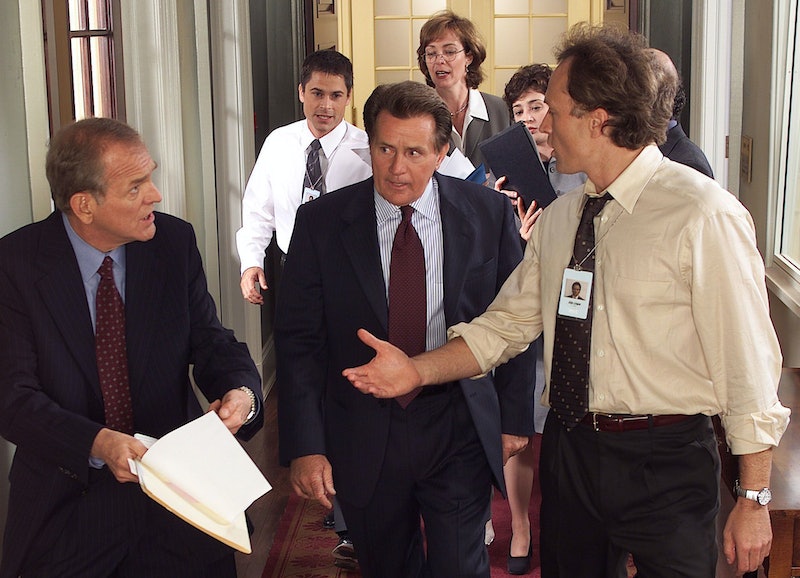 With Thanksgiving just around the corner, it's time for me to talk about what I'm thankful for, and one of those things is The West Wing. I could go on and on about why, but instead I'd rather talk to you about how your favorite West Wing characters would probably celebrate Thanksgiving. Mostly because doing the other thing would take too long and I'd miss the holiday altogether. Also, this way I get to imagine more storylines for the series, which helps me not to dwell too much on the fact that The West Wing ended in 2006 and there will never be new episodes, ever in my wildest dreams. *Sob* (At least we have Netflix, right, people?)

But I'm not going there today! No! I refuse! The holiday season approaching has me in a sentimental kind of mood, and I'm just luxuriating here in the fantasy of being friends with all these lovely people, and how we would spend Turkey Day. I'm pretty sure that all the main characters would celebrate it differently, if left to their own devices, so here's how I imagine things playing out for nine of my favorite characters. And for all of them, I'll bring the wine, obviously. Was gonna ask if you prefer red or white, but I'll just bring one of each.

Tying up the Butterball Hotline all day, and giving away family heirlooms to White House employees. As you do.

Educating the President on the forgotten four women of the first Thanksgiving who made a feast for all those men out of literally nothing when everyone around them was starving to death, NBD.

Grudgingly accepting your Friendsgiving invitation, good-naturedly complaining about the food the whole time, and then getting surprisingly misty during the toasts while everyone kindly pretends not to notice. Later on, he does the dishes for the whole meal as a thank-you.

Working, even though no one else is. Checking and double-checking the locks on her door all day, to make sure no one deposits a turkey in her office for pardoning, and then eating a warmed up Thanksgiving dinner at her desk for lunch the next day, brought in by Donna Moss.

Working at a soup kitchen while somehow also making sure his sister was taken care of by whipping up a miraculous, five-course dinner. Gentle reminder that Charlie Young is the perfect man.

An elaborate, traditional meal, crystal candlesticks and all, with Leo and his ex-wife Jenny McGarry coming together for old times' sake with their daughter Mallory. When you've been through the things Leo has, you have to have a strong foundation to fall back on.

Scanning the footage of the turkey pardoning ceremony to see if he got any air time, oblivious to Donna's attempts to invite him over for Thanksgiving. Falling asleep in front of a sports game he couldn't care less about.

Repeatedly inviting Josh over to join her potluck Thanksgiving plans, then when he can't figure his BS out, going by herself and having a bomb-ass time alone because she rules. Her stuffing turns out to be all but inedible, because she messed up the ratios by using fresh herbs instead of dried ones, but there's plenty of wine to go around and everybody loves each other, so they laugh and laugh at how bad it is over her caramel apple pie, which turned out to be delicious.

Literally forgot it was Thanksgiving today, has zero plans.

And there we go! My stomach is all warm and cozy-feeling without me even needing to stuff myself with turkey. If I can't spend the day with these characters myself, I'm just glad they're (mostly) having a good time. Happy Thanksgiving, West Wing friends! I'm thankful for you!