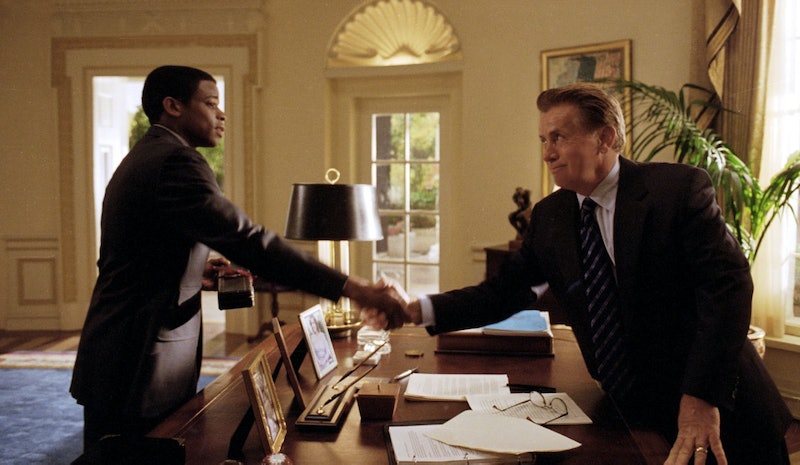 For all those of you out there who are on OKCupid and Tinder and going on dates five nights a week looking for the perfect man, I have good news and I have bad news. The good news is that I have found the perfect man, and his name is Charlie Young from The West Wing . The bad news is that he's a fictional character from a TV show that has already finished, so the two of you will literally never be together. Womp womp. Charlie, played by Dulé Hill, was the Personal Aide to President Josiah Bartlett, and he was a total dreamboat.

But even though that whole not-a-real-person thing makes it impossible for any of us to consummate our love for Charlie, it also means that we can go back to visit him in the White House anytime we want, just by switching on an episode. So if you need a reminder of why this dude is the best guy on Earth, even though it's the most obvious thing ever, you can tippy-tap your way over to Netflix any time, where all seven seasons of West Wing are at your fingertips. Or, if you don't have the 1,390,234 hours necessary to marathon the whole show, you can also check out this list of reasons why Charlie is the absolute tops.

1. He's Excellent At His Job

There's nothing more attractive than a guy who loves his job and does it well. (Bonus points if that job is working as the body man for the President of the United States.)

2. He Couldn't Be More Handsome

Not gonna explain this one to you, on account of IT'S ALL OVER HIS FACE.

Right off the bat, Charlie had no idea of his real value. He initially came to the White House to apply for a messenger job, and actually balked when he was given the offer to work directly with POTUS, because he didn't think he was qualified. Every time he was praised, given a gift, or his opinion was sought out, Charlie was open and earnest and touched, with never even a trace of cockiness. Can't beat that.

4. You Have To Earn His Smile

Charlie was so stoic that it's honestly jarring to me now to watch how smiley Dulé Hill is on Psych. But the fact that Charlie was so sparing with his charming, disarming smiles just made me want them more.

5. He Took Care Of His Sister After Their Mom Was Killed In The Line Of Duty

Some people fall apart after a tragedy like that, but Charlie stepped up and took responsibility for his family, since his dad was out of the picture from a long time ago. He took it so seriously that he refused to even go to college until his sister Deena had graduated, so he could focus his full attention on her.

6. He Went To College Without Slacking At His Job

When Charlie finally did go to college, at Georgetown, he did so without quitting his job or cracking under the pressure.

7. He Set His Sights High

Even with a prime job in the White House working for the President, Charlie wasn't satisfied with his situation. He applied to Georgetown Law and was accepted in the final episode, so I can only imagine he had a long and illustrious career ahead of him.

8. He Doesn't Forget A Favor

For as much as Charlie wants to earn his own way without outside help, if you do him a favor, he won't soon forget it. For example, Debbie Fiderer is the one who first got him a job at the White House, so, when it comes time to hire a new executive secretary after Mrs. Landingham dies (*sob*), Charlie makes sure President Bartlett knows that Debbie stuck her neck out for him way back in the day. And she gets the job!

There are dozens of examples of this through the series, but here is one of the biggest ones. Charlie promised President Bartlett that he'd leave his job as Presidential Aide once he graduated college. And technically, he does — but only to take another job in the West Wing, this time working as special aide to C.J. Cregg, President Bartlett's Chief of Staff.

10. He Donates To Charity Even When His Salary Is Zero

Nothing was more heartwarming than the moment when President Bartlett discovered this fact. I could probably tear up thinking about it if anybody needs me to.

After Secret Service Agent Simon Donovan is killed in the line of duty, Charlie takes responsibility for his Little Brother, Anthony Marcus. As if he didn't have enough responsibilities to think about already.

12. He Returned For The Show's Final Episodes

Now, this one is more about Dulé Hill than it is about Charlie Young, but I absolutely love that even though Hill left the series to go to Psych, once he heard that season seven would be The West Wing's last, he came back to reprise his role, and give Charlie the goodbye he (and we!) deserved.

Clearly he knew what we all know: Charlie is the perfect guy.