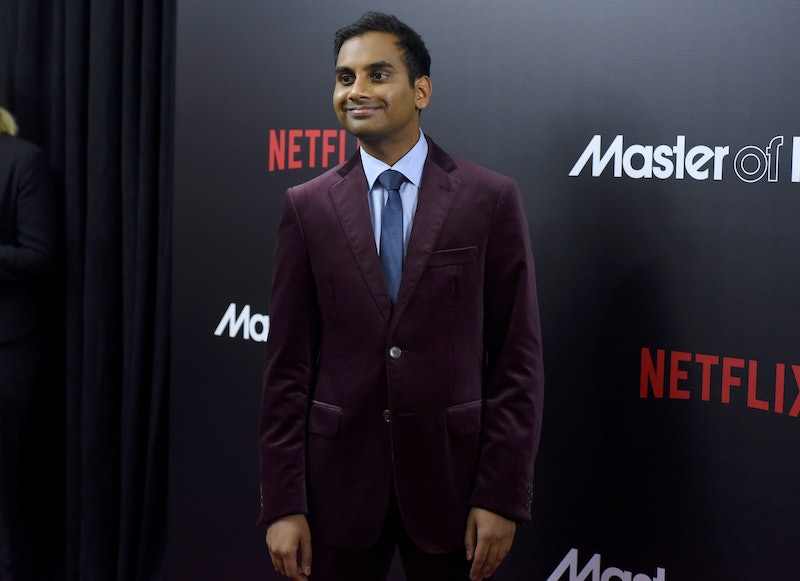 Aziz Ansari's new hit Netflix show Master of None has gotten a lot of praise since it was released a little more than 10 days ago. Fans and critics alike have sifted through all 10 episodes and come to the conclusion that this show is revolutionary. Most of the praise has come from the how hard the series works to create more diverse art, the incredible comedy prowess of its stars, and its originality. In an article in Vogue, Ansari discusses Master of None's similarities to other shows, at least in terms of the comparisons people have made. Many people have boasted that the show is like that of many of his predecessors, and loosely based on Ansari's life, but Ansari says it is in a whole different stratosphere of entertainment.

Particular the stratosphere of finding romance in New York, which is closely aligned with that of another popular show — Sex and the City. But the comparisons don't stop there. On the surface, they may be two completely different shows with different audiences, but there are a few very striking similarities between both programs. Obviously, the location is very similar, but some of the scenarios present, and the content dealt with, is eerily familiar. Not in a bad way, but in a cool modern take on romance, relationships, and life. Check out the similarities between the two shows below.

First, they say that location can play a character in and of itself in many shows, and that can definitely be said for both of these. As you already know, Sex and the City just wouldn't be the same without the city of New York. Basically, it gave every girl the strong urge to move to the city and live just like Carrie Bradshaw did. According to Vanity Fair, you can even go on a Sex and the City hotspot tour if you're in NYC nowadays. In Master of None, the city is no different. Watching Dev and his friends pal around town having frank discussions in fancy restaurants is the highlight of each show. It wouldn't be surprising if there was a Master of None hot spots tour headed this way in a few years.

While the basis of Sex and the City would seem to be focused on romantic relationships, a lot of the main meat of the show comes from the girls' platonic relationships with each other. The same goes for Master of None, whose best episode can be said to be the second one, titled "Parents." This episode explores the relationship between parent and child, and what one gives up in order to make a better life for their offspring. So too were Carrie, Samantha, Charlotte, and Miranda always providing some of the deepest and most thought provoking content just talking to one another, with the romantic relationships of the show being more like an added bonus.

Sex and the City was also a launching pad for some very famous names. Bradley Cooper, Justin Thoureaux, Elizabeth Banks — just to name a few — appeared on episodes of the show in their early career. While only time will tell, we already see star potential in many of the Masters of None characters. Specifically Noel Wells, an SNL alum who steals the spotlight in each episode she's on. It's only a matter of time before she has her own television show.

It's already pretty obvious that the Sex and the City crew dressed pretty well. I mean, there are even fashion lines inspired by their characters, so enough said. The character of Dev has a pretty nice style of his own as well. He may not be boasting Louis Vuitton shoes like Ansari's Parks and Recreation character Tom Haverford, but he gets by.

Both of these shows were not afraid to go for it when it comes to touch subjects like sex and race. For instance, the first episode of Ansari's show starts with his condom breaking and having to go get Plan B with his date. And don't even get me started on the episode where the Sex and the City girls attend a tantric sex workshop. See? Like I said, no boundaries.

The thought of having kids, or the lack thereof, is the elephant in the room for many of the show's episodes. Already on the first episode of Master of None, we see Dev figuring out whether he should settle down. This seems to be a huge point of contention in a lot of New York singles on television.

Nothing on television had been quite like Sex and the City in it's time, and the same goes for Master of None. These two shows have set their own bar and been ahead of the game for many years. The legend lives on for Carrie and her friends, and I believe the same will soon be able to be said for Dev.

While both shows boasted original content and groundbreaking story lines, there are a lot of similarities between the formulas used to devise a great show. If these similarities are any indication, then Master of None will be around for years to come, and will maybe even have a few movies to boast.