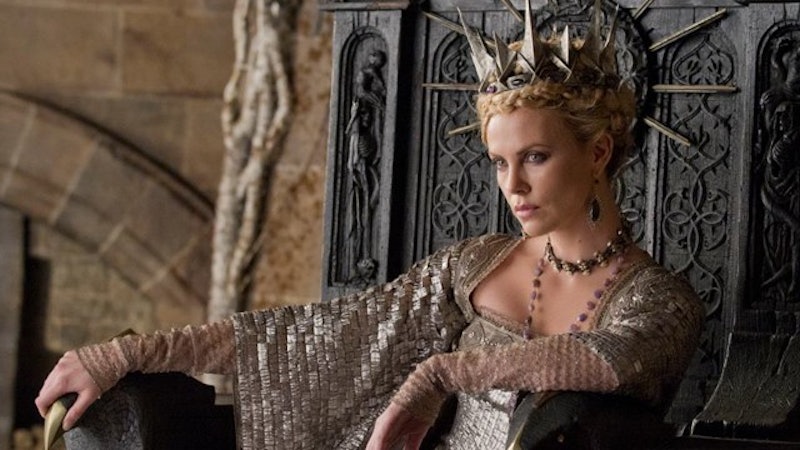 If you had told me yesterday that I'd be this excited about the trailer for The Huntsman: Winter's War , I would've been like A. "What is that again?" and B. "Oh no, you are wrong, I am not now and will not ever be excited for that." I just wasn't impressed enough by the original, Snow White and the Huntsman, to feel like it merited a sequel. Sorry not sorry, but it seemed like even Kristen Stewart snoozed through that one — and she was onscreen! So you'll forgive me for not realizing what a piece of complete and utter badassery we had coming our way until I glimpsed the newly-released trailer. And you guys. It is so good. So, so good. I got feminist goosebumps all over my body from all the ass-kicking women. They're so hardcore that they actually end up overshadowing Chris Hemsworth, who's presumably the star of the movie, since it's named after his character.

Stewart herself isn't in the follow-up, but Charlize Theron is returning, and she's being joined by two other queens of the screen/my heart: Jessica Chastain and Emily Blunt. Oh. Hell. Yes. They're all such strong HBICs that I'd be satisfied with a movie starring just one, but instead we get all three, and Hemsworth doesn't stand a chance coming out of this trailer as the most compelling character. Here are the 16 moments when he's getting seriously upstaged.

1. When Emily Blunt Turns The River Into Ice Like It's No Big Deal

4. I See You Serving Battlefield Realness

5. On Wednesdays We Ride Polar Bears

9. Hard To Tell Which Of These Sisters Is More Dangerous

12. The Phrase "Jessica Chastain Is The Warrior" Has Me About To Pass Out

13. This Blur That Is Her Taking Some Dude To The Ground Like A Boss

15. You Know, Just Catching Arrows Out Of The Air With My Bare Hands

I have got to see this movie. Even that song in the background has me so fired up, I wanna go storm a castle or something! WOO. Check out the trailer for yourself and see if it has the same effect!