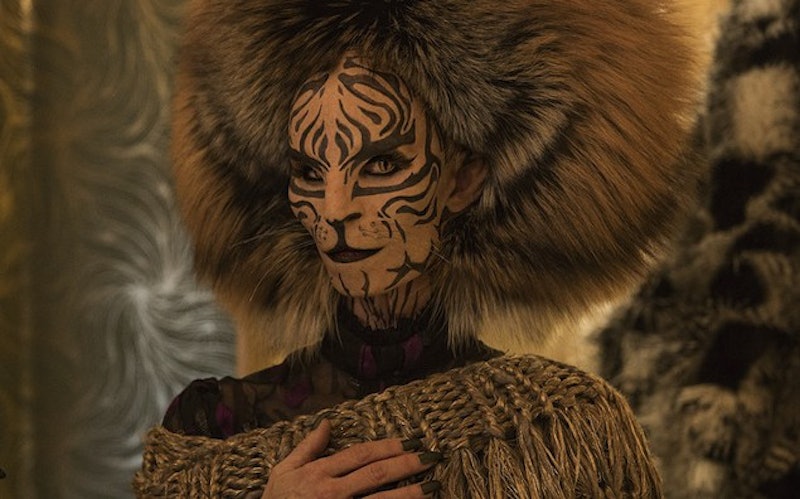 In the future, at least according to The Hunger Games, all wealthy people (and Tributes) get to dress as if they're straight out of a Lady Gaga video. The pop star's outrageous outfits would fit right into the Capitol, where wacky colors and insanely shaped dresses are considered high fashion. Audiences were introduced pretty quickly to the odd and fantastical looks residents of the Capitol pride themselves on when we met The Hunger Games' Effie Trinket, for example. However, the weirdness doesn't end there. In Mockingjay Part 2 , which opens in theaters Nov. 20, we'll be introduced to a character even more bizarre in appearance. But exactly who is Tigris in Mockingjay , and what do you need to know about her?

Well first, there's her... unusual appearance. Tigris has surgically altered herself to the point that she looks quite similar to the animal she deeply loves, the tiger. She used to be a valued stylist during the Hunger Games, but President Snow got rid of her because of her too radical look — we're talking implanted whiskers, tattooed stripes, and a nose flattered enough to resemble a snout. Since leaving the games, Tigris runs a small store where she (appropriately) sells fur-lined clothes. Tigris is described to not only look like a cat, but she acts like one too — she moves like a cat, purrs when she speaks, and only consumes raw meat (girl, you in danger). She's also acquaintances with Plutarch Heavensbee and Cressida.

The transformation is amazing, compared to actress Eugenie Bondurant's lovely real life looks. In an interview with Where To Watch back in October, Bondurant discussed how she made herself go peak feline. You would think that as a former model, Bondurant would totally have it easy, but there was some work involved in her transformation into the sleek creature. The actress worked with a dance choreographer, who helped her in building "just a rhythm for this character. I looked on YouTube and went to the zoo and did things like that but really the main thing is working with the choreographer because she helped tremendously." Bondurant also spoke about the aesthetic components of being Tigris (the pounds of makeup, in addition to prosthetics and contacts) and how those challenges helped her feel more connected to the character, saying

"Most of my senses were compromised as in my sense of hearing, my sense of sight, my sense of smell. Tasting-wise, I wasn’t able to eat. I had to drink things through a straw. Even my sense of touch with my fingers, I have very long fingernails on, and then I am walking around and these incredible shoes. I’m a former model, so in terms of knowing how to walk down the catwalk, that whole thing was a piece of cake for me. But when your senses are not quite cut off but impaired, it puts things in a little bit different perspective. It really brought to light the difficult process that this woman tigress deals with. It made her plight a little more personal."

In Mockingjay, Tigris' knowledge of color and patterns comes in handy, as she provides much-needed disguises to Katniss and her merry band of rebels while they're in the Capitol (as she is also pro-rebellion). However, you'd be surprised by how long it took Bondurant in real life to suit up. "I think when we first started I sat in the chair for six and a half hours," she told Us Weekly in a recent interview. "I had tattoos all the way down my arms and on my back and on my chest. I had wardrobe on and so it was both — tattoos and makeup on my body."

I have to say, Bondurant exceeds all expectations when it comes to Tigris, and it seems that all the hardship she endured while on set definitely ended in a worthwhile result. As for what happens to Tigris' character at the end of Mockingjay? Spoiler alert— she lives! Throughout the rebellion, Tigris houses refugees and presumably carries on with her luxurious shop after President Snow is taken out of the picture. This just goes to show that being a cat lady is awesome and means that you will survive the Hunger Games — so start gathering your protective kitties now. May the odds ever be in your favor, dog lovers.