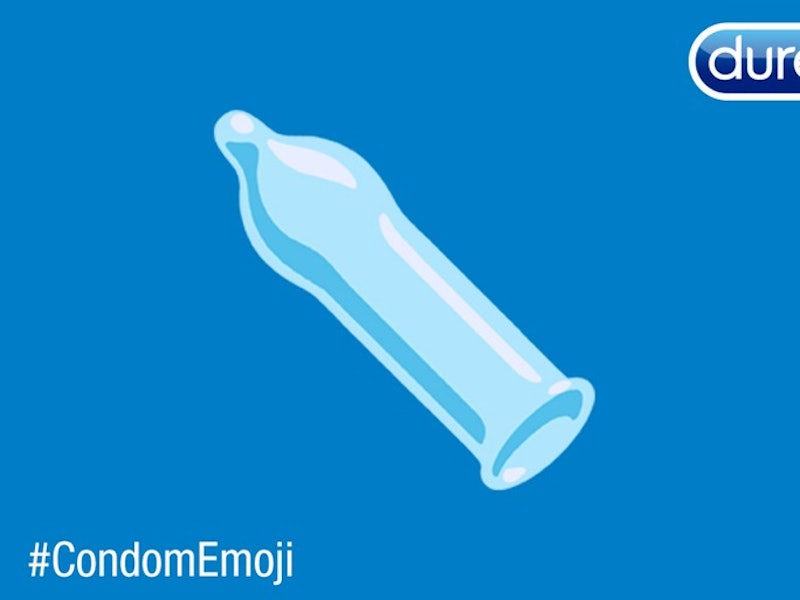 On December 1 of each year, World AIDS Day is held as chance for people all over the world to unite together to fight against and show support for those living with HIV. Because of that, Durex has launched a worldwide campaign to create the world’s first-ever official safe sex emoji. That’s right. You may soon be able to peach + eggplant safely and responsibly.

“The language of emojis has fundamentally changed the way in which young couples communicate and, based on our research, we know that they are more comfortable using emojis when discussing sex,” Durex marketing director Karen Chisholm tells Bustle. “We hope we can help bring condoms to the forefront of the conversation and empower young couples to drive the discussion of safe sex.”

While some of us have been warned of the risks of having unsafe sex since grade school (if we were lucky enough to have sex ed), it seems like it hasn't exactly sunken in. A recent report released by the Centers for Disease Control found that the rates of sexually transmitted diseases are hitting new highs. Among those numbers, more than 1.2 million people in the U.S. are living with HIV infection. As Durex found, one reason why people aren't practicing safe sex is because they're just not talking about it.

Leading up to the campaign, Durex commissioned researchers to look into how emojis play a role in young people’s conversations around sex.

Here's what the study found:

1. 80 Percent Of 18 To 25-Year-Olds Find It Easier To Express Themselves Using Emoji

2. Over 50 Percent Regularly Use Emoji When Talking About Sex

3. 84 Percent of 18 To 25-Year-Olds Said They Feel Much More Comfortable Talking About Sex Using Emoji

4. More Than One-Third Claim Not To Care About Safe Sex

5. Nearly Half Think HIV Will Never Affect Them Or Their Friends

“In light of this research, the Durex brand is asking one million people to use and share the hashtag #CondomEmoji to represent their support of the creation of the world’s first official safe sex emojis by the Unicode Consortium,” Chisholm said in a press release. “Emojis of this sort will enable young people to overcome embarrassment around the discussion of safe sex, encourage conversation and raise awareness of the importance of using condoms in protecting against sexually transmitted infections (STIs), including HIV and AIDS.”

As studies have found, young people seem to be pretty lax when it comes to their sexual health. According to a 2013 study released by the Sex Information and Education Council of Canada, nearly 50 percent of sexually active college students aren’t using condoms. Furthermore, while many report to using condoms the first time they have sex, responsibility seems to waver as time goes on.

Sure, talking about having safe sex may not seem like the sexiest thing in the world. It can be uncomfortable. But, with Durex’s plan to provide people with condom emojis, maybe that could help change that.

“While many may feel uncomfortable having honest conversations about safe sex, an official condom emoji is a simple step towards empowering young couples to ignite the conversation around safe sex, better protection and overall sexual wellbeing,” Chisolm says.

More like this
Here’s How To Deal With Sexual Frustration If You Don’t Want Casual Sex
By Annakeara Stinson and Mackenzie Sylvester
Here’s How To Reignite The Spark In A Sexless Relationship
By Vanessa Marin
How To Use The Shook Filter On Snapchat, TikTok, & Instagram
By Emma Carey
Remember These Ancient Pieces Of '90s Tech?
By Lucia Peters and Emma Carey
Get Even More From Bustle — Sign Up For The Newsletter