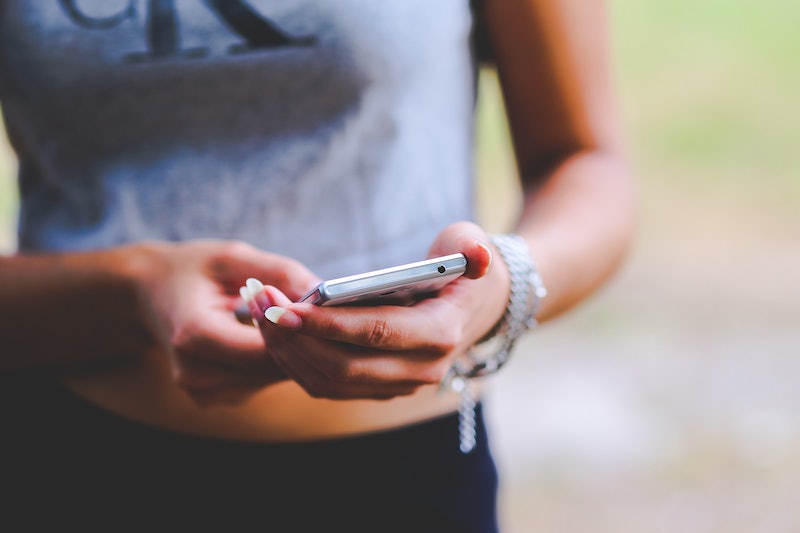 Praise the iPhone gods: With its latest update, new emoji were released, so naturally, the first thing to do was figure out how to use them while sexting. Whether you're an avid sexter or just think it's funny to use emoji ~suggestively~ with your friends, you'll be thrilled with how these new emoji can change the game.

The update gives us over 150 new emoji total, including, among other things: A cute little lion, a cheese wedge, a popped champagne bottle, and a coffin (morbid much?). I made it my mission to find the most sexual ones, though, because I think there's nothing more Millennial-chic than sexting with emoji. For one thing, it's easier than typing out every single word, and it adds some visual appeal to the convo, which can never hurt. Obvi, don't go crazy, and be sure to actually use words to communicate your turn-ons, but don't shy away from throwing in an emoji or two to get the point across. Oh, and don't forget: There are some emoji you should never use while sexting — they're not all sext-friendly, of course.

Here are 10 new emoji that you can put to work ASAP for all your sexting endeavors — it's silly, but go ahead and admit it, sexting with emoji is fun.

"Wiener" is one of the most popular (and childish) nicknames for a penis, and now we finally have the emoji to match! Looks like the eggplant has officially been ousted as the emoji of choice when referencing a penis via text. The hot dog reigns supreme!

Ugh, as much as I hate when people call a vagina a "taco" (so demeaning and gross), there's no doubt in my mind that this will quickly become a favorite emoji equivalent for vagina. Just make sure the girl you're sexting knows her vagina is much sexier and more appealing than a Mexican cuisine item. Plus, there are plenty of more eloquent, less offensive euphemisms that don't compare vaginas to a consumable piece of food.

Blow job reference, anyone? Paired with any penis-shaped emoji, this new emoji will make your oral fixation crystal clear. Plus, she looks majestic and seductive AF, if you ask me.

All the burrito enthusiasts out there know that burritos can be pretty phallic-looking. They're round, long, and boy, are they thick. This new emoji, aside from finally allowing you to let bae know when to bring you Chipotle, also gives you another emoji alternative to the eggplant-as-penis trick.

For when things are getting hot, hot, hot! Since this particular food item is a little random, the pepper might be a good emoji to use playfully alongside something else, so maybe say, "oooh, that's hot!" or "spicing things up, eh?" and then tack the pepper on at the end for emphasis.

After the sexting is done and you're in cuddle mode, this new hugging emoji is the perfect way to virtually snuggle up. It's not quite as satisfying as spooning IRL, but the little emoji face sure is adorable.

Sometimes, someone tries to sext you and you're just like, um no. If someone is being creepy and trying to harass you via text, now there's finally a middle finger emoji to let him or her know to back the hell off. Or maybe you're totally cool with your sexting partner, but they make an off-color joke or say something that doesn't exactly turn you on. The middle finger can also be a playful way to say, "Thanks but no thanks."

If you consider yourself a nerd (which is not a bad thing, BTW), you'll be delighted to know you can now compare your man's junk to an old-school gaming controller: the joystick. It's knob-like and meant to be handled, if you know what I mean.

More like this
The Best Time To Date After A Breakup, According To Experts
By Bustle Editors
Hinge's New NFAQ Feature Is Demystifying Queer Dating
By Emma Carey
The Top Mistakes Scorpios Make In Relationships (& How To Avoid Them)
By Nina Kahn
7 Women Share Their Best Orgasm Stories
By Lexi Inks
Get Even More From Bustle — Sign Up For The Newsletter