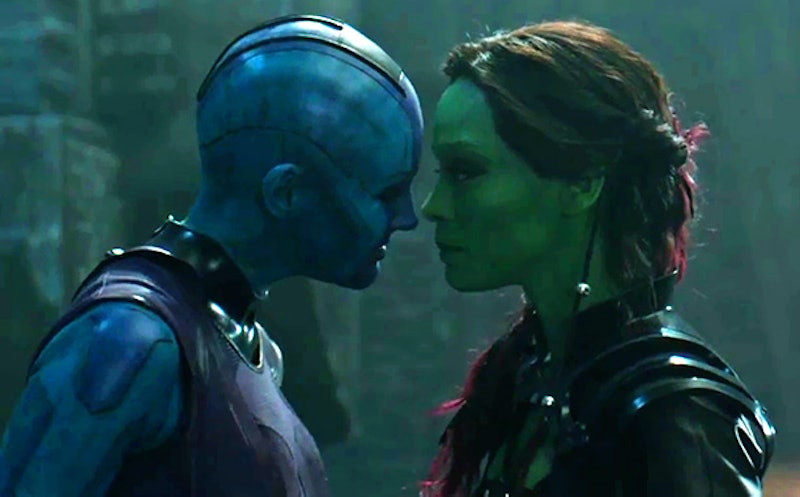 Guardians of the Galaxy was as close to perfect as I have seen any superhero movie come so far. The characters were charming, watching the team come together was a blast, and the music was so good everyone is still talking about it. The only thing I walked away from the movie feeling like there wasn't enough of was Gamora and Nebula's fractured sisterly bond. Happily, Karen Gillan (Nebula) told Comic Book Resources that Guardians of the Galaxy Vol. 2 will delve deep into Gamora and Nebula's relationship, and Gillan could not be more excited about it.

"I think what I'm really excited about is delving into the sisterly relationship between Gamora and Nebula," Gillan told CBR. "I think that we're going to see a little bit more of that, and it's going to be a bit more fleshed out." This is excellent news for not only the movie, but the Marvel movieverse as a whole. Let's face it, with the exception of the Thor franchise's Darcy and Jane, and Guardians' Gamora and Nebula, there aren't many other strong relationships between women in the Marvel movieverse.

Female characters are either love interests or Black Widow, and while Natasha may share the occasional scene with Maria Hill or Pepper Potts, the movies have not been interested in establishing any female bonds on the level of Steve and Tony, Thor and Loki, or Steve and Bucky — until now. Adopted sisters Gamora and Nebula have a relationship every bit as fraught and complex as the one that exists between brothers Thor and Loki. Both Gamora and Nebula were raised to be assassins, and the violence inherent in their upbringing colored their relationship.

The closest the two come to affection in the first film is when Nebula tells Gamora, "You are a disappointment sister; out of all our siblings, I hated you the least." Their father, Thanos, raised them to be efficient killers, and deep down both women hate him for it. Gamora may be Thanos' favorite child, but she wants to distance herself from him. In a perfect world, Nebula would be by Gamora's side, but Nebula refused to join Gamora in atoning for their past mistakes.

There is so much history between these two women, so the second movie has plenty of emotional material to work with. Gamora is forming a new family with the Guardians, but the last time Nebula was seen she was flying out alone into the universe. It's possible she went back to Thanos despite her hatred for him, and if that is the case then I cannot wait to see Gamora and Nebula's confrontation over Nebula's return to their father's side.

Gillan confirming the second Guardians is interested in exploring and expanding on the sisters' story makes me even prouder of this franchise than I already was. Gamora and Nebula are darker and deadlier versions of Thor and Loki. They are killers, bound by a shared past, and only one of them feels like she can free herself from the cycle of pain. Love is not a concept they have had much contact with, but Gamora proved she has the capacity for love and compassion over and over in the first movie. The challenge in the second movie will be seeing how Gamora and Nebula react to each other when they have become so vastly different.

Seeing Marvel devote real time to a relationship between two women in one of their franchise's could be the first step toward making female friendships, rivalries, and familial bonds the norm. The exploration of Gamora and Nebula's bond could be the beginning of something beautiful for Marvel — an example of female inclusivity the movieverse should incorporate into all of its franchises. I know I cannot wait to see what is next for these two badass sisters.