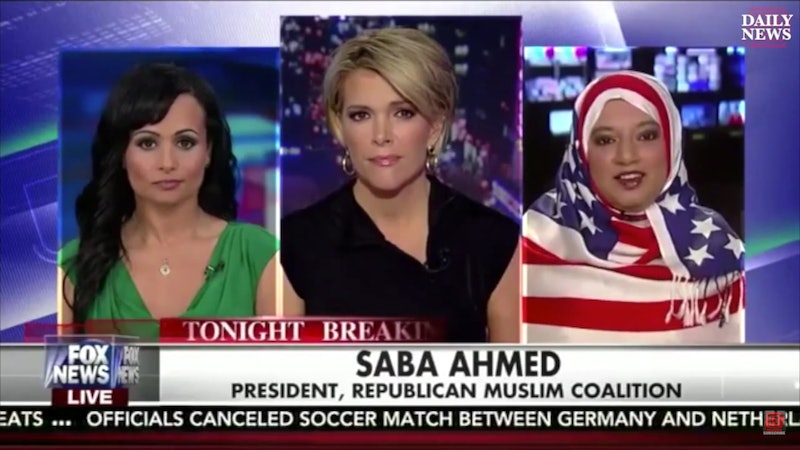 Another day, another ludicrous remark from Donald Trump. Now he's insisting the U.S. should shut down mosques, in blatant violation of the First Amendment. Not only is this kind of collective punishment illegal and unfair to the millions of Muslim Americans who attend their local mosque to peacefully pray and socialize with fellow community members, it's exactly the kind of fear-mongering that leads to Islamophobia. Fox's Megyn Kelly discussed Trump's comments on The Kelly File with guests Katrina Pearson, a Trump spokesperson, and Saba Ahmed, a Muslim activist wearing an American flag hijab. Awesome.

Ahmed, a Pakistani-American, was chosen to appear on The Kelly File because she is the president and founder of the Republican Muslim Coalition, a Washington D.C.-based group that promotes policies that are "pro-life, pro-marriage, pro-traditional family values, pro-defense, pro-trade, pro-business," according to the organization's website. Ahmed founded the coalition to give a voice to conservative Muslim Americans in politics. Ahmed herself is a patent attorney for the government, and also holds a doctorate and an MBA. Interestingly, she ran for U.S. Congress in Oregon in 2011 as a Democrat and became a Republican in 2012. Clearly she's a highly intelligent woman who demonstrated poise and confidence when she challenged Kelly and Pearson on Tuesday.

Defending Trump, Pearson cited the Boston Marathon bombers, who attended a mosque in Massachusetts that allegedly had ties to radical activity. Ahmed, in response, said simply, "Megyn, we come to the mosque to pray." She added that the accusations against American mosques were unfair, as the U.S. does not shut down churches when Christians commit crimes in the name of God.

Ahmed is a frequent guest on TV news programs, appearing on Fox, MSNBC, and other outlets to speak for peaceful and conservative Muslims in the U.S. After the Paris attacks last week, Ahmed's Republican Muslim Coalition was one of the strongest voices condemning terrorism. Of ISIS, she said, “they have perverted our religion and [they are] criminals that chose to misuse religion teachings to justify their criminal actions.”

You've got to love this woman. Who doesn't appreciate a good "turn the other cheek" response to ignorance and hatred? By wearing the flag as a hijab, Ahmed proclaims the importance of both her country and her religion. It's also a symbol of the coexistence of patriotism and religious freedom — it's one of the principles our country was founded on, after all.

On social media, unsurprisingly, viewers had mixed reactions to Ahmed's choice of attire. They range from admiring to amusing to downright rude.

Props to the viewer who mentioned swimsuits. If you can buy an American flag print bikini or boxers, why should a red, white, and blue hijab offend anyone?