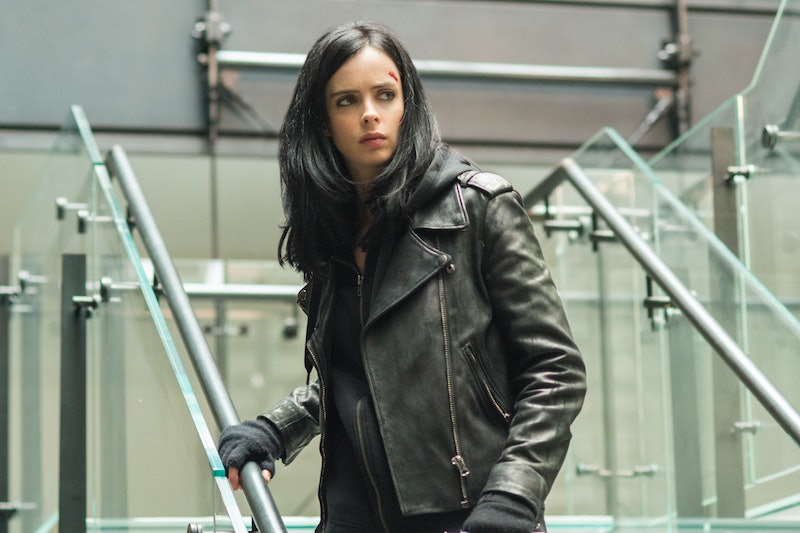 The Marvel Cinematic Universe continues to add to its roster with this Friday's debut of Jessica Jones on Netflix, the second of the streaming service's gritty comic book shows after this April's well-received Daredevil. Without the rights to some of its most famous characters like the Fantastic Four and the X-Men, Marvel is forced to swell its ranks with second-tier heroes that will probably be less familiar to casual fans than the likes of Wolverine or the Human Torch. So just who is Jessica Jones?

This new series will likely attract tons of viewers based solely on the strength of its stellar cast (including Breaking Bad's Krysten Ritter, Doctor Who's David Tennant, and The Matrix's Carrie-Anne Moss) as well as the strong reputations of both Daredevil specifically and the M.C.U. generally. Still, it doesn't hurt to familiarize yourself with the source material a bit before diving in head first — especially given the fact that this is the rare superhero property that is NOT an origin story.

Unlike most comic book characters, who start their onscreen career with a chapter detailing their rise to superhero status (or, if you're Spider-Man, you get this chapter three times), Jessica Jones will focus on the titular character's career after her retirement from crime fighting. To get you prepared for the premiere this Friday, here are a few tidbits chronicling how Jessica arrived at the point... as well as a few teases for where her story goes afterwards.

The character was introduced rather recently in the history of Marvel comics, debuting in her own series titled Alias in November of 2001. The series opened with Jessica as an adult, and as it progressed, it went back and filled in the gaps of her origin, retconning the character into other significant events within the Marvel universe.

Originally, Jessica Campbell was just an average, everyday student at Midtown High — the same school that Peter Parker attended — and she was actually present when he received that fateful bite by a radioactive spider. When her dad's boss, Tony Stark, gave him tickets to Disney World, her family embarked on a road trip... which ended tragically when their car was hit by a truck carrying radioactive chemicals.

While Jessica's entire family was killed, she was dosed with the chemicals, which gave her super-strength, increased endurance, and the power of flight. She was adopted by the Joneses and soon returned to Midtown High, but she didn't decide to harness her powers to fight crime until she personally witnessed Spider-Man battling the Sandman.

During Jessica's first attempt at superheroic-ness, she adopted the alter ego Jewel and tried stopping petty crimes — although her biggest success was when she tried flying and accidentally crash-landed right on top of Scorpion, who happened to be robbing a laundromat at the time. During this period, she met the man who would go on to become her archenemy: Zebediah Killgrave, aka the Purple Man.

The Purple Man, who has the ability to control people's minds through pheromones, kidnapped Jessica and brainwashed her over the course of eight months before sending her out on a mission to kill Daredevil. Thankfully, she managed to shake the Purple Man's influence with Jean Grey's help before this could happen. Shaken by this incident, Jessica discarded her shiny Jewel persona and instead became the tough-as-nails vigilante Knightress for a time. This period is when she met Luke Cage, a man who would go on to be very significant figure in her life.

Her stint as Knightress didn't last long; still suffering from post-traumatic stress disorder from her encounter with the Purple Man, Jessica Jones soon hung up her cape and retired from superheroing. She became a detective, opening her own business called Alias Investigations, working frequently alongside Luke Cage. Her career as a private investigator brought Jessica into contact with many Marvel heroes, including Daredevil, Captain America, Captain Marvel, Ant-Man, and Black Widow. She was briefly hired by J. Jonah Jameson to uncover Spider-Man's identity, although she used his resources to feed the poor instead.

Eventually, the Purple Man escaped from prison and returned to torment his former thrall. He committed increasingly gruesome atrocities, including killing an entire restaurant full of people by commanding them not to breathe and starting riots by persuading everyone to beat the person next to them to death. However, when the Purple Man tried to invade Jessica's mind again, it was revealed that Jean Grey had implanted a "psychic defense trigger" when she helped Jessica recover earlier. Jessica was able to resist the villain and beat in combat, sending him back to prison.

Jessica kept busy post-Purple Man, fighting in Nick Fury's Secret War, mentoring the Young Avengers, and defending against the Skrull Invasion. In her downtime, she married Luke Cage and gave birth to a daughter, Danielle.

Of these recent conflicts, Civil War is the most notable, due to the fact that the storyline is being adapted for next May's Captain America sequel. In the clash between heroes over the Superhuman Registration Act, Jessica Jones and Luke Cage landed on the side of Captain America in defiance of the Act, fighting against Iron Man and his supporters. Jessica ended up fleeing to Canada to keep newborn Danielle safe, while Luke stayed behind to fight.

While we know that Krysten Ritter and Mike Colter aren't on the massive cast list for May's Civil War , it will be interesting to see if the Netflix series will start to lay any groundwork for the impending conflict. Alongside ABC's Agents Of S.H.I.E.L.D. and Agent Carter, Jessica Jones is one of the only branches of the Marvel Cinematic Universe left to air before next spring's blockbuster sequel, so if the studio wants to plant any more seeds before its big debut, this is their chance.

All 13 episode of Jessica Jones' first season will be unveiled on Netflix this Friday, Nov. 20.

More like this
Everything You Need To Know About ‘Black Panther: Wakanda Forever’
By Bustle Editors
The 50 Most Powerful Characters In The Marvel Universe, Ranked
By Johnny Brayson and Nola Pfau
Alan Rickman's Diary Reveals Why He Considered Leaving 'Harry Potter'
By Darshita Goyal
UK Viewers Will Have To Wait For The Terrifying 'Hellraiser' Reboot
By El Hunt
Get Even More From Bustle — Sign Up For The Newsletter