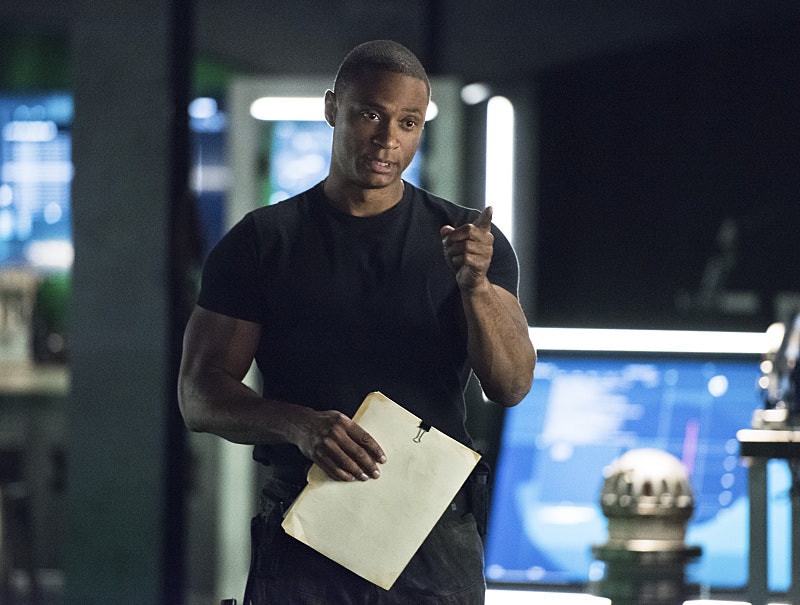 In a twist that I think many of us figured was coming, we finally got confirmation that Diggle's brother Andy is still alive and working for H.I.V.E. on Arrow. And as you can probably imagine, this was a very hard pill for our beloved Diggle to swallow. You see, normally a sibling would rejoice at the prospect of reuniting with their long lost brother. But given the recent information that Diggle's learned about Andy's past — like the fact that H.I.V.E. supposedly killed him because his criminal operations conflicted with theirs — his belief in his brother's innocence has been severely shaken. So when he removed one of the Ghost's masks and saw Andy's face, it was a complete shock to his system.

That being said, it's still unclear whether or not Andy is really a bad guy or not. Throughout the hour, Oliver was adamant on giving Diggle's brother the benefit of the doubt, insisting that there had to be a good reason for why he faked his death and was working for Damien Darhk. And I think he's right. It's possible that Andy's working undercover, but I think his allegiance to H.I.V.E. isn't of his own accord.

Those yellow pills that Darhk has been distributing to his Ghost comrades appear to serve two very important functions: 1.) It somehow scrambles up their DNA, making it impossible for them to be identified and 2.) It influences the users to be especially cooperative with whatever they're being asked to do. In other words, it makes them compliant and susceptible to being placed under someone's control. That's a dangerous thing if put in the wrong hands and could very well explain Andy's actions throughout the past eight years.

Deep down there's still a part of Diggle's brother that still exists. As Felicity pointed out, one of the Ghosts (most likely Andy) purposefully spared Diggle's life last year. He wouldn't have done that if there was no trace of a good person left in him. So odds are these pills are to blame for making him prime to dark suggestion. Let's just hope that now that Diggle has him in captivity, we'll finally be able to get to the bottom of his actions once and for all.