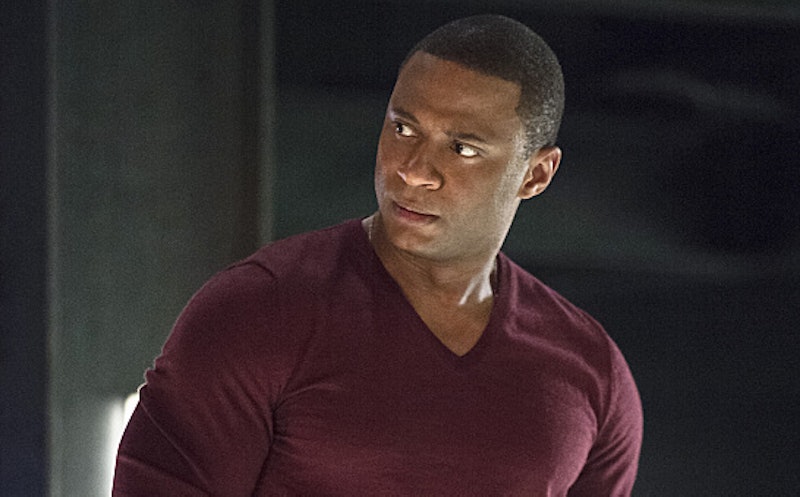 Poor Diggle. This guy really can't catch a break. After years of trying to figure out why his brother was killed, he ends up learning that his beloved family member is a lot shadier than he ever let on. During Wednesday night's Arrow episode "Haunted," Diggle learned Damien Darhk had his brother killed, but not for the reasons you would initially suspect. While many of us may have jumped to the conclusion that Diggle's brother went down in a blaze of heroic glory, fighting for the greater good, it turns out that he was an opposing competitor of Darhk's in the crime lord community. And since men like Darhk don't exactly like to share their power, the guy had to go. But now I'm starting to wonder if there's even more to this story. What if Andrew Diggle is still alive on Arrow ?

I know it seems like a long shot, especially considering that Darhk hired an assassin to kill him. But if this show has taught us one thing at this point, it's a.) thank God for salmon ladders, and b.) coming back from the dead is not only possible, but highly probable. (Looking at you, Sara Lance!) So I wouldn't be too quick to scoff at this idea. And now that we know that his morals weren't exactly on the up and up, then we could be looking at a potential showdown between the Diggle brothers sometime in our near future.

Honestly, I might not be so quick to jump to this conclusion if it hadn't been for the events that transpired throughout the episode. Darhk sent Lance into a facility in order to delete computer files on certain people — one of which just happened to be Andrew Diggle. Why would he want these records destroyed? Does he perhaps know something about Andrew that we don't? Darhk comes across as the type of man who never does anything without a good reason. So if he wants information about Andrew out of the public eye, then chances are it's because here's a bigger mystery lying underneath the surface. Only time will tell…