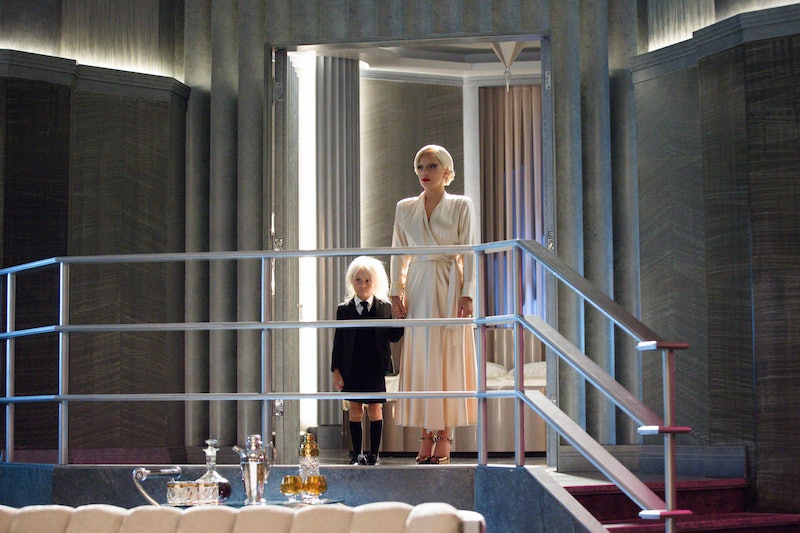 American Horror Story: Hotel delivered a lot of exciting details to many various storylines this week. However, the one that left me scratching my head the most centered around one of The Countess' blonde vampire children, Wren. We'd seen this girl before way back when Will Drake's son got to explore that cool video game room hidden inside of the Cortez. However, she played a much more prominent role in Wednesday night's AHS: Hotel episode "Flicker." After John checked himself into a psychiatric facility (because this dude seriously needs some help), he found Wren locked up in one of the rooms. She had apparently been present during all of the 10 Commandment Killer's kills and even helped him avoid getting caught by killing a security guard in a very Countess-like fashion (e.g. slitting his neck with just a swipe of her fingernail).

Shortly after that we were treated to her rather tragic backstory, which involved her very own father locking her inside of a hot car on a humid summer day so that he could go have a drink inside of the Hotel Cortez bar. (Another example of great parenting, courtesy of AHS.) That's when The Countess spotted her and saved her from a life of neglect. Except now Wren sort of wishes that she had been allowed to grow up. She now, ironically, viewers her immortality as a curse, which is why by the end of the episode she purposefully ran in front of bus and killed herself. (Remember, those infected with the virus are only immortal if they can avoid accidents and injuries.)

But before this character performed her swan song, she may have left us with yet another clue as to why John is clearly the 10 Commandments Killer. For one thing, she seemed to like both John and the killer equally, which is why she chose to help both of them in their time of need. Coincidence? I think not! And then there's the fact that she seemed sad about helping John figure out the truth, knowing that once he finds out, he'll be devastated and probably end up meeting his demise.

In the meantime, though, let's just hope that Alex faces some serious repercussions for being the worst vampire governess ever. Because I very much doubt The Countess will take losing Wren lightly.