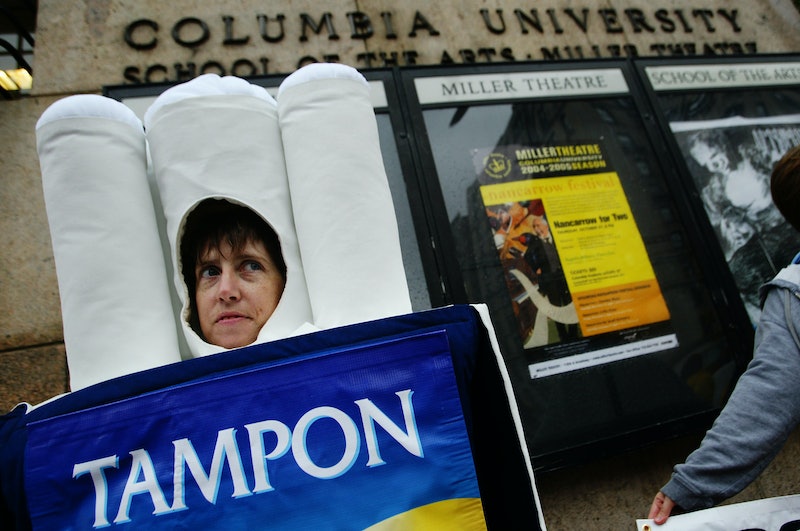 If you're a tampon user, you may not give much thought to the small wad of fabric you put into your nethers for one week a month, other than wondering if it's leaking and getting annoyed when there's no disposal bin. But the tampon has a fascinating and somewhat disgusting history in human medicine. Made from everything you can think of (rock salt, opium, and elephant dung are all on the list), tampons have been used for centuries for a huge swathe of purposes. It seems we've been putting folds of various stuff up our genitals for thousands of years, though you'll likely be surprised at the reasons why.

One thing you'll likely need to get straight is that the tampon, in history, was rarely a tampon in the way we think today, and not just in material or shape. It was a contraceptive device, a way of distributing medicine, a method of healing, and often not thought to have anything to do with menses at all. The modern word "tampon" is likely derived from the Middle French for "plug," as in a stopper for a bottle or (more specifically) the plug put in the front of a gun muzzle. Before that, however, it usually came in the form of a vaginal plug of some form or another, and it was as much about preventing things from getting in as stopping anything from getting out.

From the modern ob tampon (the mysterious name for which I'll explain) to ancient Indian and Egyptian devices, let's go on a wild journey through the history of the tampon.

The idea of inserting a thing that's not a body part into the vaginal canal was actually probably first developed by the Egyptians — or at least they're the first ones who wrote it down. For them, however, it seems largely to have been a matter of solving existing gynecological problems, not helping with menstrual flow. They were, in essence, vaginal pessaries. The Ebers Papyrus, for instance, recommends helping a woman with unusual discharge by crushing up earth from the Nile with honey and galena, putting it inside a wad of linen, and leaving it inside her. (Yeah, because that's going to help her yeast infection.)

Pessaries made of elephant or crocodile dung, or of lint soaked in acacia juice, were both used as contraception devices over the history of ancient Egypt, and the Romans got in on the act too, with so-called "destructive pessaries". They also had a huge range of pessaries on offer for various gynecological problems, soaked in everything from goose fat to opium, but it's now commonly believed that they were a second line of defense, because they probably caused infections.

When it comes to whether they used actual menstrual tampons, there's a bit of an issue. For ages, people have said that Hippocrates, the most famous Greek doctor of all, talked about tampons made of lint wrapped around sticks. (Ouch.) But as Helen King notes, this is likely a misuse of the Greek word motos , which basically means the material they used for dressing wounds. If something was being put up the vagina (say, soaked in opium), Hippocrates did say it should be covered on motos, but there's no mention of using it to stop menstrual bleeding. Myth: busted.

Unfortunately, while the idea of a lint-covered stick appears to be nonsense, other medical tracts are a bit more explicit in their ideas about what to put up females' intimate bits. And, again, it's not for menstrual purposes: it's for stopping baby-making.

According to Nelly Stromquist's Women In The Third World, 4th century Sanskrit texts like the Kama Sutra recommended the use of tampons made out of oil and rock salt as contraceptive devices. Strangely, this was probably pretty effective: rock salt is a lethal spermicide, and even a solution of eight percent will destroy every sperm in sight. Not much use for periods, though. Probably stung like hell, though.

One of the first civilizations to use tampons for apparent menstrual reasons may have been the Japanese. It's now pretty commonplace that certain women in ancient Japan used tampons made of paper, held in place by a bandage called "kama," or pony. These sound distractingly ineffective, so they apparently needed to be changed up to 12 times a day. It's not clear where this information came from, though, and it may have been scuttlebutt about a particular class of women, like prostitutes. So take it with a grain of salt.

Another case of "possibly, maybe" in tampon history comes from blood moss, a European plant with pretty unique astringent and blood-stoppering qualities. Some scholars believe that the name didn't come from its use as a bandage material for wounds in battle, but from its use as a menstrual material, possibly in tampon form, among medieval women. As nobody's ever written about moss tampons, though, this remains just a theory.

19th Century: Whatever Was Around

Some of the first mentions of tampons in the 19th century were still about contraception, but they start to take forms we may now recognise. In his treatise Illustrations And Proofs Of The Principle Of Population, published in 1822 the English thinker Francis Place advocated a tampon for contraception, in the same vein as a sponge. He wasn't picky about what it should be made of, though. Suggested materials included lint, flax, cotton, fine wool (yikes, itchy) or essentially anything soft and absorbent. This was proper medical advice: the treatise was published in The Lancet, still the most respectable medical journal in England.

20th Century: The First Tampon As You Know It

Unusually among many inventions, the tampon in its two modern forms (with applicator and without) was formed, invented, and distributed almost entirely by women. The initial discovery of the telescoping cardboard "applicator tampon" was developed and patented by the Colorado doctor Earl Haas in 1931, but it was a woman, Gertrude Tendrich, who bought the patent and started to produce it, expanding from sewing tampons at home to distributing them under the now-famous brand name Tampax. In the first seven years of Tampax's time on the market, their use increased fivefold, and even though they had to use their factories to produce surgical dressings and bandages when American entered World War II, their rise wasn't hampered.

The other type of tampon, the no-applicator kind, was invented by the German gynecologist Dr Judith Esser-Mittag, which is the reason they tend to be referred to in the literature as "o.b. tampons": o.b. stands for the German for "no pad," or ohne Binde. Esser-Mittag sold her invention to a company that was eventually bought by Johnson & Johnson, and the modern no-applicator tampon became a force to be reckoned with.

But the modern tampon faced a bit of an uphill battle. According to Carla Rice in her book Becoming Women , people objected to them for all sorts of reasons: religious leaders thought they'd make girls prone to erotic feelings, and parents didn't want their daughters' hymens ruptured. But they gained rapid usage during World War II, when women became part of the workforce and needed better menstrual care. And the sexual revolution in the late '60s and '70s (the ad above is from 1967) brought a new mode of more "feminist" tampons, as critics pointed out that scented tampons were actually completely useless and quite bad for your pH (still true).

Present Day: Tampons For Everyone?

These days, pads are still actually the more popular option, but tampons have huge market share: surveys estimate that around 42 percent of women use them, even after the scares about toxic shock syndrome (a rare condition related to tampon use) in the '90s.

The tampons of today face all-new challenges. There are a lot of discussions currently being had about the green future of tampons: many of them have a big environmental footprint, filling landfills, washing up on beaches, and proving very hard to biodegrade. They're also often processed using some fairly body-damaging chemicals (like chlorine), so new frontiers need to be pushed to make them eco-friendly and safe.

These sorts of concerns have taken tampons into the home-made sector. There are now sponge and crochet tampons made of bamboo, make-your-own-tampon tutorials, and organic cotton versions. Plus, there's also been a thorough backlash against the stupid woman-leaping-in-white-trousers theme of tampon ads throughout the decades, with modern tampon ads now far more straightforward (helped by the fact that there isn't as much TV censorship nowadays). And it's clear that women no longer regard the tampon as an abnormal or controversial choice: the UK government's current plans to tax it as a "luxury" have met with widespread derision.

Overall, the future looks relatively bright, as long as the tampon can adjust to our higher standards about health, safety, and greenery. But space-age self-regenerating tampons could be on the horizon

— we'll just have to wait and see.

More like this
How To Fight For Reproductive Rights, Based On How Much Time You Have
By Courtney Young
5 Ways To Stand In Solidarity With Women In America From The UK
By Sophie McEvoy
Why You're Seeing Green Bandanas At Abortion Rights Protests
By Lexi Inks
11 Podcasts About The History Of Juneteenth
By Emma Carey
Get Even More From Bustle — Sign Up For The Newsletter