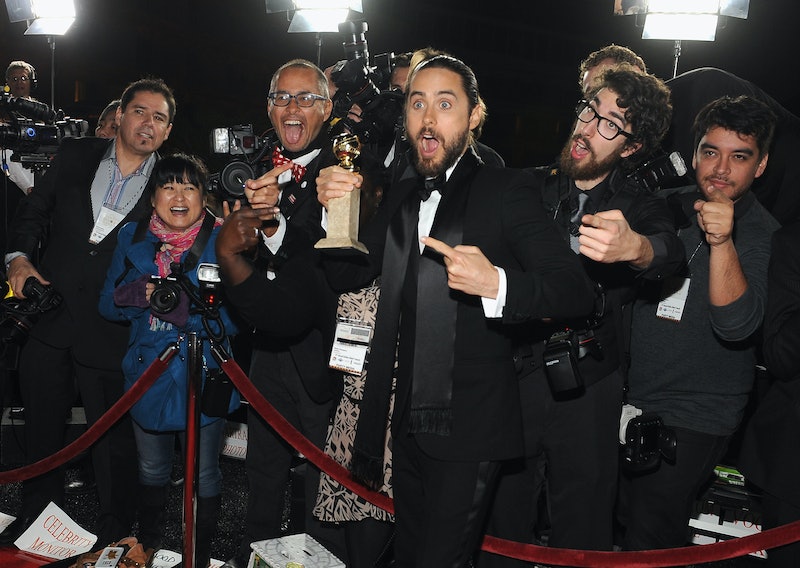 Jared Leto and Michael Douglas both picked up Golden Globes last night for their performances in Dallas Buyers Club and Behind the Candelabra, respectively. Leto won for his role as Rayon, a transgender woman who partners with Ron Woodroof (Matthew McConaughey) to illegally sell unapproved yet effective AIDS medication in Texas; Douglas won for his portrayal of Liberace in the HBO television movie Behind the Candelabra. Neither Leto nor Douglas made any mention in their speeches of the issues that their characters faced.

Instead, Leto made this tasteless comment which elicited tense laughter from the drunk crowd: "I did not ever use any prosthetics in this film. That tiny little Brazilian bubble butt was all mine." Must be nice to be so comfortable with your actual body that you can make jokes about its flaws — this security is not a luxury that the transgender woman, Rayon, enjoyed. Leto also described the harrowing experience of waxing: "I had to do a lot of things to prepare. One of the things I did was wax my entire body, including my eyebrows." Wow, such sacrifices for art. As Daniel D'Addario pointed out today on Salon:

It’s an actor’s job to prepare for a role in whatever way the script demands; it may have been difficult for Leto to wax his entire body, but it’s sort of a weird punch line for a person whose entire role was about body discomfort and the painful modifications one must make to feel OK with oneself. Leto got money and at least one award for playing his part in “Dallas Buyers Club”; it’s strange that he didn’t take into account the notion that his struggle was not, in fact, the most important one involved in his role.

That's the kicker: in whatever way the script demands. Leto, playing Rayon, could leave the character on set. His speech made light of and even mocked the complexity and pain of being a transgender woman because he does not suffer any of the injustice that people in the transgender community do. The crass and glib comments that Leto's speech were rife with still elicited laughter from the audience. Because it's Jared Leto! And he was a teen heartthrob! And he has a bun ponytail!

Why did Leto's peers of Hollywood laugh? For the same reason that they giggled, however awkwardly or tensely, at Michael Douglas's acceptance speech for Behind the Candelabra, in which he said he was worried what it meant to have been asked to play the role of Liberace. Could it mean people thought he was GAY? A man who likes MEN? He used the word "mincing" to describe the godless sodomy of the Gays, which was actually, horrifically, an improvement upon the less subtle homophobia that marked his Emmy acceptance speech (to Matt Damon he asked: "Do you want the bottom or the top?").

The laughter of their peers makes ALL of Hollywood complicit in this funny ha-ha homophobia. These jokes are "funny" because Leto and Douglas are cisgender, white men who can laugh at the issues the marginalized gay community, because they are not a part of it. Their motives become transparent: they did not perform in Dallas Buyers Club or Behind the Candelabra to be allies to those they were representing; they did it for the dollar.

Also important to note: across the board in all acceptance speeches last night, there was a marked absence of the discussion of the films' content. Neither Leto nor McConaughey made any mention of the victims of AIDS, or AIDS itself, the central issue in Dallas Buyers. Instead, McConaughey mentioned that his wife called him "her king," because HEY HE'S STRAIGHT, EVEN THOUGH HE PLAYED A GUY WITH AIDS. Douglas also did not make mention of the struggle of gay men facing homophobia.

We get it, straight white men of Hollywood. You are straight, and white, and you think it's just so fun to come to work and put on these wacky hats, and then go home to your wives and give it to 'em good so no one will ever doubt your sexuality. It is frustrating enough that these LGBT roles that should be given to LGBT actors are played by straight men, who then disregard the struggle entirely while accepting gold stars for their awesome work. Great job.

Tyler Coates asked the questions that needed to be asked at Flavorpill:

All three speeches made me wonder how differently these films would have been received had they not starred charming, handsome, and especially straight A-list actors. Would they have gotten made at all? It’s debatable. Would queer or transgender actors have brought something different to their roles? No doubt. Would they have perhaps added more dimensions to the characters they were playing? It’s very likely. Would they have deepened the political context of their roles, bringing to them an understanding that the personal is the political? Would they have realized that you cannot simply step up on the Golden Globes stage and disregard the identity-based struggles of these complex characters who put golden trophies in actors’ hands?

At the very least, the straight men of Hollywood need to rescind their internalized homophobia; they have to stop caping as allies when they are essentially just making a profit from groups that, ultimately, they participate in marginalizing.

And their peers in Hollywood need to stop laughing.