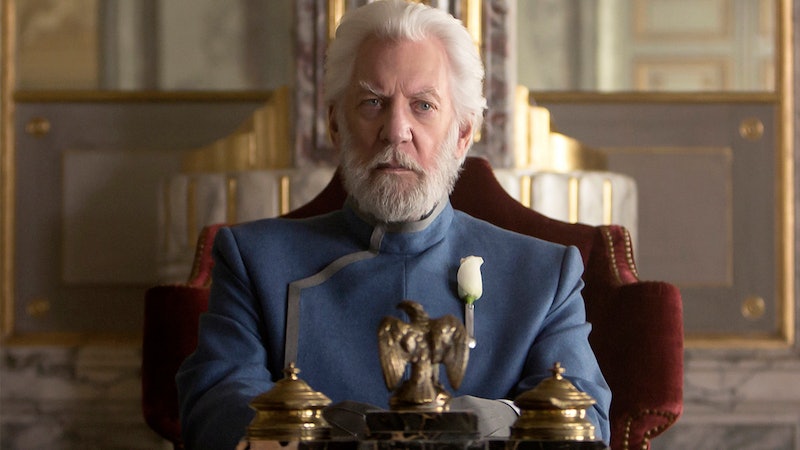 President Snow is the ultimate villain in The Hunger Games series, so it should come as a surprise to no one that he (spoiler!) meets his death in the book Mockingay and the movie Mockingjay, Part 2. What is surprising is the manner in which Snow dies; he is not killed by Katniss, but instead dies on the sidelines amidst the chaos following Katniss' assassination of Coin. Upon seeing Katniss unexpectedly shoot the District 13 leader, Snow begins laughing and coughing up blood. The next time he is mentioned, it is revealed that he's dead. So what happened? Was his death murder, an accident, suicide, or was President Snow really sick, and was Snow coughing up blood in Mockingjay the cause?

The book clears up the confusion to some extent. In it, Katniss reveals,

"After I shot Coin, there was pandemonium. When the ruckus died down, they found Snow's body, still tethered to the post. Opinions differ on whether he choked to death or was crushed by the crowd. No one really cares."

So that gives a slightly better understanding of the circumstances surrounding Snow's death. However, this still leaves some important questions... like, why was Snow coughing up blood in the first place? I'm just saying, that's *typically* not a signifier of optimal health. This unsettling symptom is actually explained earlier in the book's narrative by Finnick, although it's not discussed in the film. Basically, it's a side effect of self-induced poisoning. Snow would poison anyone who he saw as a threat to his power, and on at least one occasion he drank from the poisoned cup himself to remove suspicion of his involvement. He took an antidote afterwards, but the poison left sores in his mouth, which were constantly bleeding. Hence the bloody coughing.

If that's not freaky enough, it's also revealed that Snow's signature fragrant rose boutonniere is also linked to his ailment: he wears the flower to cover up the scent of the blood in his mouth. This explains the multiple times that Katniss reports getting a whiff of "roses and blood" when Snow comes close to her. Roses and blood. Resulting from chronic mouth sores. Resulting from poisoning. Everything about this guy is creepy AF.

It's a twisted demonstration of poetic justice that Snow had a lifelong malady related to his own barbaric actions, and that said malady ostensibly played a role in his death. However, it's also an important detail that Katniss shrugs off the significance of how Snow died. Her indifference diminishes the President's infamy and reinforces the idea that the real enemy was not Snow as an individual, but leaders in general whose actions are fueled by hatred and cruelty.