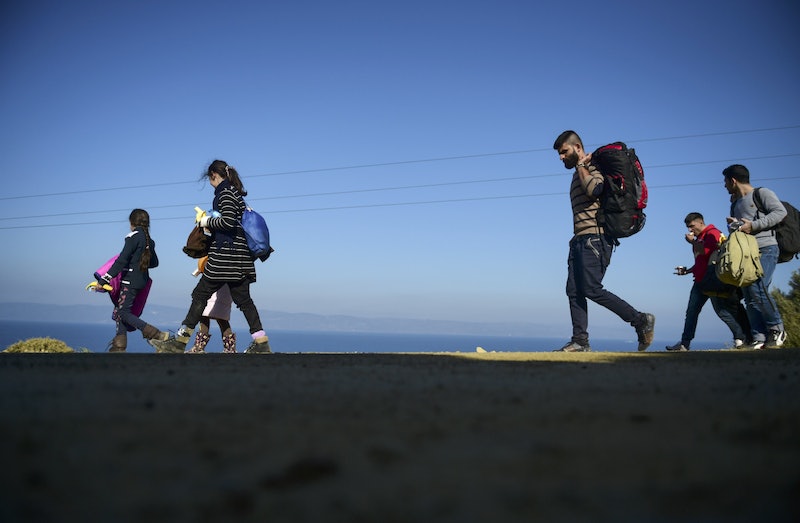 Right now, more than 30 American governors are opposing the taking in of Syrian refugees, perpetuating the idea that doing so will make the United States more susceptible to infiltration by ISIS. Frankly, Americans need to consider the demographics of Syrian refugees — the majority of whom are women and young children escaping their war-torn homeland — before supporting those decisions. Everyone is entitled to an opinion, but it needs to be an informed one.

But the fact of the matter is, we don’t know who those people are. And the majority of them are young males. And they could easily be people who are being infiltrated by terrorists and recognize that once you bring them in, then you have got to bring other members of the family in.

On the contrary, the fact of the matter is that we do know who “those people” are, and citizens as well as politicians should feel a greater obligation to research statistics before passively believing the subjective words of others. Furthermore, barring refugees based on their religion or race, regardless of the demographics, is not aiding American efforts to disengage ISIS’s pursuit of a divided world.

According to recent statistics gathered by the United Nations and updated Nov. 17, there are 4,289,792 registered Syrian refugees, and about 22 percent of those refugees are men between the ages 18 and 59. The hypothetical young male “fighting age” range is most likely narrower in reality. Also contrary to common belief, the majority (50.3 percent) of refugees are female, and an even higher majority (51.2 percent) are children under 17 years of age.

More specifically, almost 40 percent of the population, both male and female, is under 11 years of age. Thus, women and children under 17 — not young men of fighting age — make up a grand total of 76.6 percent of the Syrian refugees.

Perhaps politicians should be talking about the ways in which we may have a hand in preventing vulnerable refugees from being recruited. According to World Vision, over 5,000 schools have been destroyed in Syria, and even more are facing damage or occupation. This implies that millions of Syrian children are not being educated. Why don’t politicians consider a lack of education a potential threat to the United States and a theoretical win for ISIS?

To put the scope of Syria’s crisis into perspective, along with its dire implications that have largely yet to be realized, ISIS’s occupation of Syria affects more people than Hurricane Katrina, the earthquake in Haiti, and the Indian Ocean tsunami combined, as World Vision puts it.

During this refugee crisis, which has garnered equal attention to that of those natural disasters, but unequal aid and sympathy, the U.S. has accepted around 2,200 Syrians since March 2011, when the civil war first began. According to the data, the refugees have been placed in over 36 states and 138 cities. CNN reports that the immigration process takes an average of 18 to 24 months, but many times, Syrian refugees must wait longer. President Obama has pledged to allow 10,000 of the millions of refugees to come to the U.S. over the next fiscal year (which ends in October 2016). This quota, which increases substantially in the years following, has caused immense uproar and controversy.

ISIS seeks to create the ultimate divide by destroying infidels and establishing a hegemonic Caliphate. To achieve this, they must dismantle coexistence among people of different cultures and religions. The West’s persecution or denial of Muslims who come from the Middle East facilitates that division. As The Intercept points out, ISIS is not the first terrorist group to use this strategy to some degree.

For example, al Qaeda was largely responsible for sparking the sectarian war in Iraq between Sunnis and Shiites, which began in 2003 after the Sunni terrorist group bombed a prominent Shiite mosque and religious landmark. In an interview with Vox, Daveed Gartenstein-Ross, senior fellow at the Foundation for the Defense of Democracies, explains how a backlash against refugees may work in ISIS’s favor:

Having this wedge driven, where [ISIS] is able to intensify the backlash against refugees might help with recruiting efforts by extremists to recruit among the refugee population … Game it out from their perspective … If they were able to move operatives into Europe, posing as migrants and refugees, then that's a major win for them.

The status quo narrative surrounding Syrian refugees should be driven by a larger picture that includes both consideration of ISIS’s motives and an acknowledgement of the facts. Regardless of whether American citizens approve of accepting Syrian refugees, taking a look at all sides of the story is always worthwhile.