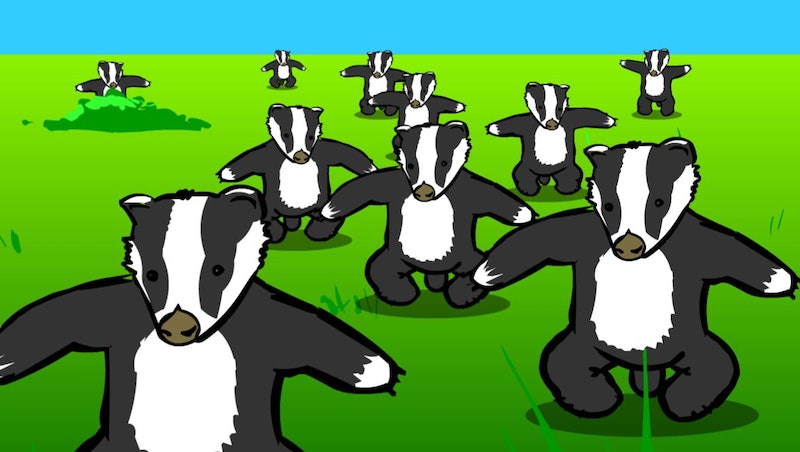 Viral videos have become a proverbial dime a dozen these days, but back in the early days of the Internet — particularly during the pre-YouTube era — they were fewer and further between. Viral videos from the early 2000s were also, by and large, incredibly weird… and yet for some reason, we just kept watching them. Not only that, but we watched them over, and over, and over again, unable for some bizarre reason to pull ourselves away. Why? I don't really know; maybe it had something to do with the novelty of the whole thing. But one thing's for sure: Each and every one of these videos secured a special place in our hearts in a way that only early-2000s Internet phenomena can.

Many of the Internet's early viral hits were animated; I suspect this has something to do with the fact that animations are more cheaply produced than live action ones, especially when you're working with a team of exactly one person. (A common thread running between all of these videos is that they were written, animated, and narrated by a lone content creator.) Most of them were uploaded to sites like Albino Blacksheep, eBaum's World, or Newgrounds; then, when YouTube came along in the mid-part of the decade — it was founded in 2005 and bought by Google in 2006 — a huge number of them made the jump, where they remain available today. Also of note: Very few of them feature cats. I'm not exactly sure when they Internet's obsession with felines doing ridiculous things began, but at the time, it seems it was limited to Lolcat images, rather than funny cat videos.

These seven viral, animated videos factored prominently in the online landscape of the early 2000s, and I, for one, still look back on them fondly — even if they're also, in retrospect, kind of odd. But hey, I felt the same way when I went back and rewatched the animated version of Yellow Submarine as an adult, so maybe that's to be expected.

Ready for a dose of off-beat Internet nostalgia?

For reasons I cannot explain, I was obsessed with “The Fifth Avocado” circa late high school/early college. Watching ridiculous Flash animations that made very little sense was my favorite way to blow off steam during midterm and finals season, so this one? It was high on my “Watch, Rewatch, and Rewatch Again” list. I'm not entirely sure when it first hit the scene — there isn't exactly a ton of information about it out there — but I'm pretty sure it was in the very late '90s or early 2000s, as Albino Blacksheep first launched in 1999. It's now available via YouTube for those of us who like to drown ourselves in nostalgia on a regular basis.

I discovered “Tales for the L33t” at roughly the same time I did “The Fifth Avocado,” and speaking as someone who was both super into the Internet and super into Shakespeare… well, you can probably understand why I thought it was the greatest thing ever. Creator Chris Coutts first uploaded the “Tales for the L33t” retelling of Romeo and Juliet in 2000, and it still makes me laugh out loud. Literally — I'm sitting here, cackling at my computer screen as I write. (It should perhaps not be surprising that I find Mallory Ortberg's “Texts From” and “Dirtbag” series just as hilarious.)

For the uninitiated, l33t (alternatively “leet,” “leetspeak,” or “eleet”) swaps out regular ol' letters in favor of ASCII symbols. It's resulted in some… shall we say, interesting spelling habits.

Like many of these early viral videos — particularly those based in Flash animation with wacky voiceovers — “The End of the World” is endless quotable, with perhaps the most notable line being, “But I am le tired.” Now-31-year-old animator Jason Windsor created the video and uploaded it to Albino Blacksheep in 2003; though he's never received any money for it (remember the days before everything on the Internet was monetized?), he recently revealed to Mic that it did help launch his career.

The first “Charlie the Unicorn” video is perhaps not as early as some of the others on this list — creator Jason Steele of the indie film company FilmCow uploaded it to Newgrounds in 2005, with YouTuber Geoff Swanson later posting a copy of it to YouTube itself in 2006 — but I would argue that it still embodies the hallmarks of earlier videos: As TIME put it in 2005, “Charlie the Unicorn proves that something doesn't have to make any sense at all to earn a cultlike following.”

If Charlie taught us nothing else, it's that we should never, ever to go to Candy Mountain. Just sayin'.

Amy Winfrey is perhaps best known for creating Making Fiends, a web series that was later picked up by Nickelodeon. Me, though? As much as I enjoyed Making Fiends, I've always been more fond of Muffin Films, which Winfrey put together as a thesis project while she was at UCLA in 2000. A series of 12 short films — one for each slot in a muffin tin — it's full of muffins and people making poor decisions. My personal favorite is “Bluebirds in Spring,” but you can watch the full series in the playlist above.

5. All Your Base Are Belong To Us

In the early '90s, a Sega game called Zero Wing was released in Japan and Europe. The opening cut scene in the European release featured some of the most poorly-translated language ever seen, the ridiculousness of which led — unsurprisingly — to the whole thing becoming a beloved meme. Then, in 2000, Jeffrey Ray Roberts remixed the scene into “Invasion of the Gabber Robotos,” and, well… you can probably guess how that went.

I spent a large portion of my high school years with “Invasion of the Gabber Robots” stuck in my head. Now it's stuck there again, and who knows how long it will last this time.

The Strinberg and Helium series appeals to me for the same reason “Tales for the L33t” does: It's Internet humor for theatre people. The juxtaposition of gloom-and-doom August Strinberg and the cheerful, pink bubble that is Helium accomplishes what John Rockwell called “a delicious skewering, affectionate and satirical, of European dead-white-male pretensions by American pop culture by way of Japanese anime (it's not far from Helium to Kitty, as in Hello, Kitty), with no slight, and all due deference, to Europe, Japan, or the United States.

The brainchild of Erin Bradley and James Bewley, the series first arrived in 2002. Although it's unclear whether or not it will return at some point, the older episodes are available on YouTube now; they can also still be seen at Strinberg and Helium's website.

We've talked about Jonti “Weebl” Picking's 2003 Flash animation before — but no roundup of early viral videos would be complete without it, so let's take another look. Although it's available as a YouTube video of just over a minute now, in its original form, it was a looping animation contained on one website; as such, it was once possible to listen to or watch “Badger, Badger, Badger” indefinitely — and, indeed, still is. The only catch is that the video and audio grow more out of sync the longer the loop goes.

Picking is also the creator of Weebl and Bob, an animated web series about two egg-shaped creatures with a fondness for pie. The first episode was uploaded in 2002.

And yes, I realize that we've now looked at eight videos, not seven. Consider that last one a bonus, because hey, it's Thursday and you deserve it.

More like this
The 'Hocus Pocus' Sequel Finally Has A Release Date & It Makes Total Sense
By Shannon Barbour and Radhika Menon
Everything To Know About 'Scream 6'
By Jack Irvin and Jake Viswanath
Taco Bell Announced A Crunchwrap & Tostada Made With Cheez-Its
By Emma Garza
What Is A “Softboy?” The TikTok Term & Aesthetic, Explained
By Courtney Young
Get Even More From Bustle — Sign Up For The Newsletter