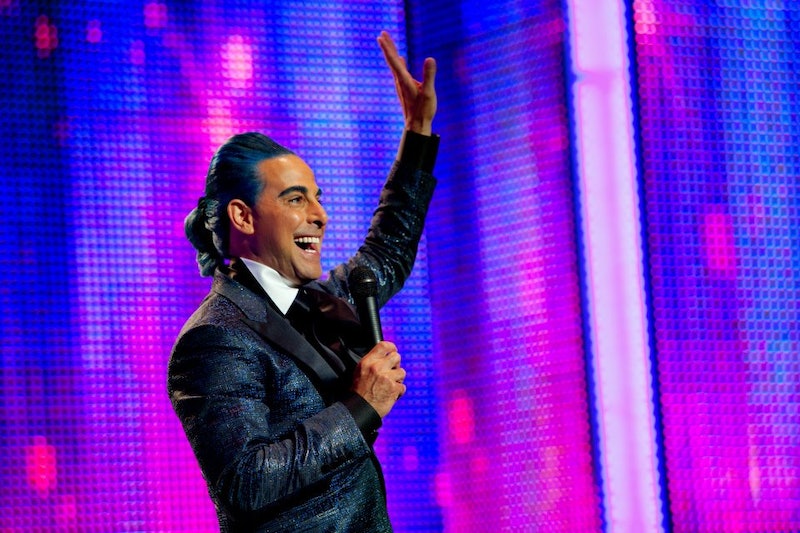 The Hunger Games has an abundance of larger-than-life characters, from Finnick to Effie to Beetee and Wiress. But one character who we never get to know on a personal level — despite seeing his gleaming smile many times throughout the series — is the charming TV host Caesar Flickerman, played in the films by Stanley Tucci. Flickerman is both literally and figuratively a colorful character, with a stage presence as vibrant as the hue of his constantly-changing hair. But since Caesar is only ever seen when he's on the job interviewing other people, the viewer never gets a totally clear picture of the host's own personal thoughts and feelings about all the goings-on in Panem. Therefore, one has to wonder: what side is Caesar on during The Hunger Games ? In Mockingjay, Part 2 and the other films, he's essentially a spokesperson for the Capitol, but you've got to wonder if he actually believes all the propaganda he's selling.

Although we have no way of knowing Caesar's true nature with any certainty, arguments could be made for several different viewpoints. The first is that Caesar is just another pawn in the Capitol's games, lacking any true knowledge of the atrocities occurring within the government and the hardships of the outer Districts. The second is that Caesar is aware of everything that is going on, but lacks the perspective to be able to see that there was anything inherently wrong with the situation. The third is that Caesar is in on the Capitol's evil agenda, and uses his position to promote it. Personally, I think the truth lies somewhere between arguments two and three. Here's why.

You might be tempted to take the first described stance if you're enamored with Caesar as Stanley Tucci portrays him, a friendly, sympathetic talk show host who is dedicated to his job and his country. You could even argue that Flickerman's job is a discreet slap in the face to the Capitol, since he humanizes the Tributes through his interviews and shows compassion for their plight. But this point becomes null and void when you take into consideration the fact that Flickerman keeps this same cheerful demeanor when he's reporting on the Games as they're occurring, providing commentary for the events in the deadly Arena as if he's watching a spirited polo match. Caesar knows what's going on, and he doesn't demonstrate any evidence of being upset by it.

This brings me to the second stance, which puts forth that Caesar is aware of dark nature of the Games but isn't bothered by it because to him it seems normal. This implies that Caesar is a product of his environment, and that in Panem, Capitol children are taught to accept that once a year, children from less fortunate areas are randomly selected to be put into an arena and fight to the death. That is their norm. And it only sounds crazy if you're able to see it from the perspective of someone for whom this isn't the norm.

Only one problem with this position: the citizens of the Capitol clearly have enough knowledge of right and wrong to understand that children being killed is a bad thing, which is why the Games were recognized as punishment for the Districts in the first place. And, to our knowledge, residents of the Capitol do not themselves engage in murder on a daily basis, so it's not like slaughtering other people is just part of the average citizen's routine. Therefore, the blanket acceptance of the Games— even if they are seen as a necessary evil— is an example of very selective attention.

The third argument— that Caesar is a willing participant in all the manipulation and bloodshed— would imply that Flickerman is just as evil at heart as Snow himself. This argument hinges on speculation, though, because it assumes the existence of convolution that is never explicitly portrayed in the books or the movies. So even if you're a showbiz veteran and therefore know that what's shown onscreen is often drastically different from the full picture, there's no way to definitively prove that Caesar's beliefs about his government are any deeper or more sophisticated than what he expresses on the air.

Yes, I realize that at this point I've officially thought way too hard about a YA fiction story. But if I'm correct in hypothesizing that Caesar knows what's going on but just doesn't feel bothered enough by it to intervene, then his character is actually a hugely important metaphor. In fact, Flickerman could be used as a allegory for every instance in history when people have allowed others to suffer at the hands of evil forces despite the fundamental knowledge that it was wrong. So I would urge you to seriously ask: just what side is Caesar Flickerman really on? And, perhaps more importantly, how do you feel about the answer?