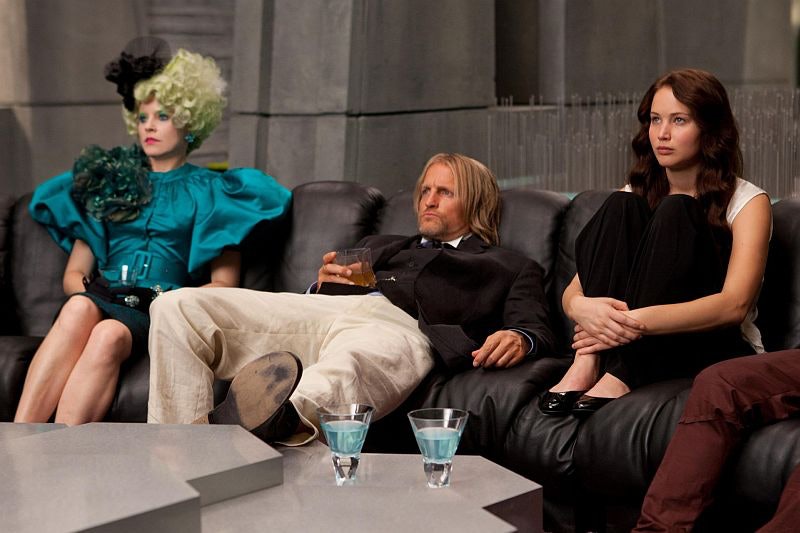 Calling all Hayffie shippers — it's time for a very important roundtable discussion on whether or not Haymitch and Effie Trinket become a couple in Mockingjay, Part 2. If you've read the books (and even if you haven't), there isn't much of a romance presented between the two. As a matter of fact, their respective book endings pretty much make any long-term relationship between them highly unlikely. However, the movies have given us a little more subtext to work with, and without spoiling Mockingjay, Part 2 for you, a little birdie has informed me that there's a brief moment in the film that only adds a little more fire to the Hayffie flame. In other words, Haymitch and Effie kiss in Mockingjay, Part 2 , so Hayffie fans, get excited: your time has finally come.

Besides Katniss + Peeta and then Finnick + Annie, the coupling of Haymitch and Effie is undoubtedly one of the franchise's top ships. So why is it that despite the fact they're not canon, people just love the idea of them together? I have a few theories behind their appeal, because if there's one thing for certain, it's the fact that it's hard to deny that they do have a special sort of magnetism.

1. They Complete The Trio

Katniss has Peeta. Finnick has Annie. Everyone loves Haymitch and everyone loves Effie, so why not make the number of couples in the Hunger Games a winning trio rather than an awesome duo by shacking up two singles who happen to be fan favorites?

Haymitch has obviously been through a lot and carries the scars from having been subjected to the Hunger Games and the murder of all his loved ones by President Snow. He turns to drinking instead of other people. As a romantic interest, Effie could be the one to help Haymitch fight his demons and truly begin healing.

3. The Actors Give Them Chemistry

Chemistry isn't something you can just throw into a script and say it's there — it's up to the actors to bring those vibes to life. Elizabeth Banks and Woody Harrelson sizzle as much as they effortlessly jibe back and forth on screen as their characters, only making me want Hayffie to be real even more.

4. They Can Balance Each Other Out

Effie's lived more or less a charmed life, hailing from the wealthy Capitol, compared to Haymitch who grew up in District 12, the poorest out of all the districts. Haymitch could teach Effie about the world outside of her charmed bubble. In return, Effie could probably bring some much needed positivity to Haymitch's less happy perspective.

5. They Just Look Good Together

There's a fun visual appeal as well as chemistry appeal to these two that I think is best highlighted by the gif above. There's just something about Effie's eccentric, wildly colorful outfits pitted against Haymitch's less extravagant, scrappy looks that makes you want to the incite the rule of polar opposites attracting.

And there you go — those are the factors I think made Hayffie a thing amongst Hunger Games fans. Now if whether or not Hayffie would have a valid, healthy relationship, given Haymitch's drinking problem, is another discussion for a different day, my fellow Mockingjays. In the meanwhile, keep bringing the fanfic on.