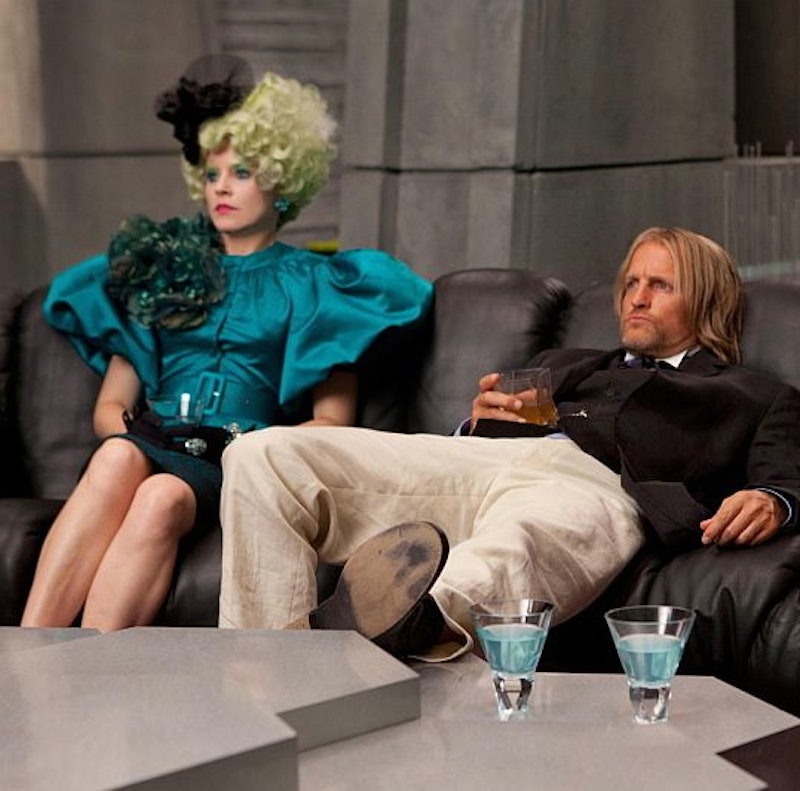 The latest Mockingjay Part 1 clip gave us a glimpse at Effie without all her makeup and flouncy wigs. But it also may have revealed a major movie addition: a romance between Effie and Haymitch. It's not unheard of for a film to create a couple where there wasn't one in the book version. In the final Harry Potter installment, the movie paired Neville and Luna together even though in J.K. Rowling's mind they marry completely different people. Is a similar thing happening in Mockingjay? From what I saw, Hayffie is looking pretty canon.

"You know, I like you better, Effie, without all that makeup," Haymitch tells her during a strategy meeting. She fires back, "Oh, well I like you better sober." The words themselves aren't that special. They could be construed as snippy, even. But the tone is everything, here. Haymitch's comment seemed genuinely sincere and Effie's voice got all high and flattered and I can practically smell the wedding bells.

Having them be in a relationship would be a very different end for the pair than the book gave them. [Spoilers ahead] In the novel, Haymitch moves back to District 12 to live out his hermit life, and Effie stays in the Capitol. But as different as it would be to match them up, I don't think even the diehard fans would mind for several reasons.

Elizabeth Banks so captures that character and her spirit that no one wants her to leave, ever. Her character is hardly in the third book, but Effie plays a large role in the third movie. This is mainly because Lionsgate, and fans, didn't want to give her up. I didn't mind that her character got an inflated role, so I don't think I'd mind if she also got a boyfriend.

IT WOULD SMARTLY SIGNAL THE END OF THE CAPITOL RULE

An easy way to show that the Capitol is finally out of power would be to have this Capitol/District 12 romance out in the open. Their love would have previously been forbidden, but now that Panem is moving towards a brighter future, love is free to bloom again. Movies are all about symbolism and Hayffie is a good choice for one.

EVEN ELIZABETH BANKS IS A HAYFFIE SUPPORTER

"I love the idea of Hayffie so much that I named my character in Pitch Perfect Gail Abernathy-McKadden" she said referencing Haymitch's same last name of Abernathy. At this point Hayffie needs to be canon if just for Banks' sake. She sat through hours of costuming in the first two movies, give the woman what she wants.

BECAUSE HAYMITCH DESERVES A CHANCE TO LOVE AGAIN

One of the most heart-breaking things about Mockingjay, is that you learn in the book that the victors were exploited after their wins. They were essentially turned into prostitutes for the wealthy Capitol citizens. If they refused, someone they loved was killed. The Capitol didn't like insubordination to the point where after Haymitch won his games using a flaw in the arena's force field, his whole family was killed.

"My mother and younger brother. My girl. They were all dead two weeks after I was crowned victor," Haymitch tells Katniss. "I was the example. The person to hold up to the young Finnicks and Johannas and Cashmeres. Of what could happen to a victor who caused problems."

This traumatic experience so young in his life is likely why Haymitch abstained from relationships. He didn't want to endanger anyone, or fall in love only to have the Capitol rip it away. Under Capitol rule he couldn't love anyone, but now that the rebellion was successful maybe he'll finally get that chance. After everything he's endured, he deserves to find happiness. And if he finds it with Effie, we all win.