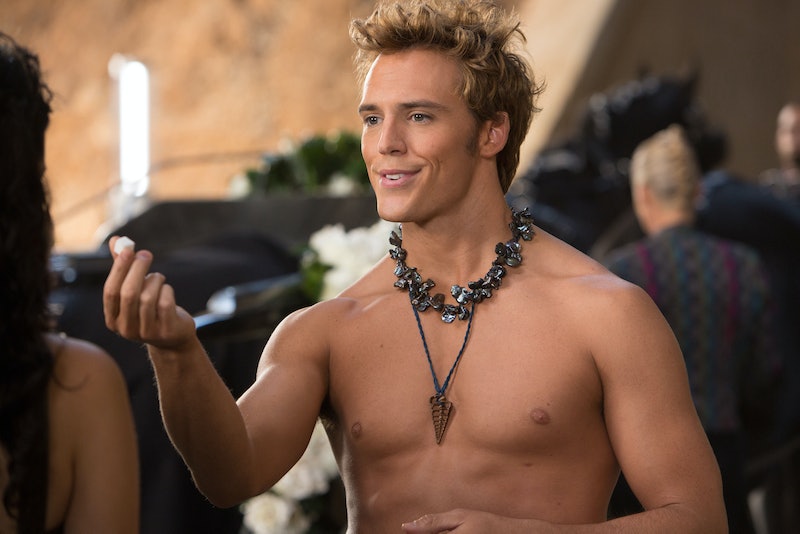 Many lives have been lost during the course of The Hunger Games — which is no surprise considering the whole franchise centers on a tournament in which a bunch of kids are thrown into an arena and forced to kill each other to entertain the privileged citizens of the Capitol. Don't get me wrong, every life in Panem is precious (except all those jerk Peacekeepers and President Snow, obviously), but none is more so than that of the charming, dreamy, albeit kind of arrogant Finnick Odair (Sam Claflin). I hate to be the bearer of bad news, but the golden boy of District 4 meets his maker in the final Hunger Games movie — but how does Finnick's death in Mockingjay, Part 2 compare to the book? His demise in the novel and the movie are very similar, but seeing his on-screen death is drenched with more emotion than it is on the page.

Let's start with the good news about Finnick. In The Hunger Games: Mockingjay, Part 2, he's reunited with his boo, Annie and they get married. Soon after, he joins Katniss's mission to go kill President Snow. All of this doesn't end well for Finnick, though. The beginning of his demise starts when he is with everyone in the underground tunnels of the Capitol. They are on their way to help Katniss complete her mission to assassinate President Snow at his mansion. The group is attacked by a swarm of lizard mutts. As everyone climbs out of the tunnel to safety, he stays behind fending off the nasty creatures. His head is bitten off by a mutt before Katniss can help him. She drops the Holo map/bomb into the tunnel to kill the remaining mutts and we say goodbye to our dear Finnick.

If you think that is sad, wait until you see how it plays out on screen.

The movie follows the same pattern of events, with a couple of very minor changes. Finnick dies during a mutt attack underground, but there's something very heroic about his death on screen. As Katniss, Peeta and the rest of the group are being attacked, he comes in like Superman (or Aquaman) with his trusty trident, picking off lizard mutts one by one. Whether you read the book or not, you just know that this is his last stand.

As everyone climbs out of the tunnel, Katniss looks down at Finnick, who is the last one coming up on the ladder. She reaches out to help him up, but a mutt jumps on his back as he is climbing. He is pulled him down into the water and a herd of mutts bury him in an attack. Seeing that this is a PG-13 movie, we don't see his head get bitten off (thankfully), but we do see Katniss's reaction to his death, which is just as heartbreaking.

The movie takes the emotional reaction you would have from reading about his death and packs on so much more sadness and grief. It hits you right in the gut. I about bawled like a baby when Katniss dropped that bomb into the tunnel as she watched her friend getting killed.

Killing off major characters in movies is never fun, but it is a necessary evil. Finnick died a hero and we shall forever remember his dreaminess.